The Death of Hector | Teen Ink

The Death of Hector


The fierce great warrior, Achilles wept over the body that laid below him. Patroclus, still a boy not yet a man laid beneath him a deep wound in his chest, flowing with red liquid. Blood. Achilles placed his hands over his chest to stop the bleeding, but the blood soaked through his hands. His tears fell on the young man’s face but he did not care. His friend, brother, cousin laid dying in his arms and there was nothing he could do but mourn him.
“Noooooo.” He mourned. Why? Its all his fault. He should have fought. It should be him dying and not Patroclus. A boy. A child who has not yet had his first kill. Hector did this. Hector killed him.
“Hector, I will kill you.” Achilles spitted out that name as if venom on his lips. Achilles carried the boy back to the camp where he was buried properly and sent off to the home of the gods. He died a hero’s death and shall live as one in the afterlife.

There was an argument in the morning between Achilles and Odysseus. Achilles overcome with grief refused to eat. Odysseus argued back that Achilles would not fair well against the well fed prince of Troy. Achilles refused time and time again accusing Odysseus of Gluttony. Odysseus was always thinking about his stomach above all else. Zeus, king of the gods, listend to their argument with interest and agreed with Odysseus. Every man should be well fed before entering the horrors of battle. Zeus sent his daughter to Achilles and secretly nourished the impenetrable hero with ambrosia, the food of the gods. Zeus then allowed the Olympians to re-enter the battlefield. For he had fulfilled his vow to the goddess Thetis, and wished for the Gods to make sure Achilles did not capture Troy yet. It was not yet time. The city will fall, but not today, it is not the day for troy to fall.

Achilles had his heart set on revenge, killing as many Trojans as he could and driving them back to the city. He was ruthless, not sparing a single Trojan, for when he looked in their faces, the face of Hectors appeared before him and he killed them as if he was killing the prince himself.

Polydorus’, the youngest son of Priam, King of Troy, was one of the many that did not escape from the mighty Achilles. Polydorus was forbidden to fight that day listen he did not and entered the battle. Polydorus was a fast runner, the fastest in all of Troy, but no one, not even him, could outrun Achilles’ mighty spear.

Hector watched as his younger brother fell to the ground with a spear through his chest. He saw the spear fly from Achilles and into his brother’s chest. His eyes met Achilles across the field and for that instant they shared the same pain. Pain of losing someone dear, someone who was not ready to go to the next life. Two enemies understood each other like none other before. That feeling went away as fast as it had come as Hector of Troy spirited towards Achilles sword raised. Achilles raised his own sword awaiting to meet him. Achilles would have killed him right there and then but it was not the time or place for Hector of Troy to die. Apollo god of poetry, sun and future, knew this and spirited Hector away in a white cloud. Achilles enraged, pursued the fleeing Trojans.

Achilles red with rage and white with revenge killed many at the scamander river. Lycaon, son of Priam and Loathe, a prince, laid at his feet begging for his life. Achilles captured him once before and got a good deal of treasure for his ransom. Treasure did not matter to him, he was Trojan and related to Hector none the less. Achilles plunged his sword deep,into the cowards neck and he died on the river bank. He threw the body of the prince in the river, not listening to the warning of the river god. The river god warned him once more not to kill on his waters but Achilles payed no attention to the warning and killed all the men he wished. The river god, enraged, tried to drown the hero. Achilles struggled to get free from the waters yet he could not surface, Hera, seeing this, ordered her husbands son, Hephaestus, to rescue Achilles. Hephaestus did so, threatening to dry the river with fire.

Fighting was not only on the grounds of earth, it was also high up in the skies among the gods. The Olympians were divided up on sides for the Trojans and for the Greeks. Her, Posiden, Athena and Hephaestues favored the Greeks. Where as Apollo, and his sister Artemis Ares and Aphrodite preferred the Trojans.

Temper and heat flared among the Gods. Ares, God of war, threw spears at Athena, which she hurled stones this size of the sun, right back at him, knocking him out in a place of dreams. Aphrodite wailed and cried and came to her lovers aid. Athena, annoyed with her wailing and attempt to fight, hit her in the jaw, letting Aphrodite join her lover in the land of dreams. The goddess of love and the god of war laid unconscious next to each other knocked out cold by the hot tempered goddess of war and wisdom, Athena.

Posiden tried to start a fight with Apollo but Apollo, refused to be baited by the sea god. Hera beat Artemis, the goddess of the hunt, with her own weapons sending her crying back to her dad, the king of the gods, Zeus. Zeus watched all from his throne with great amusement.

The Trojans retreated behind their walls aided by the sun god, Apollo. Only Hector remained outside the impenetrable walls. Achilles approached, rage flaring as mad as the great war god Ares. His armor flashing in the sun, his sword catching the light of the sun, drenched in blood. Blood on his hands armor, face, helmet, everywhere blood. At this sight Hector’s heart stopped beating and he fled the great warrior. Hector ran, as Achilles pursued, as if a game of cat and mouse. Everytime Hector made a run for the gates Achilles intercepted him, forcing him to flee in another direction. Apollo sustained the great prince’s strength but that was not enough to keep him from the great warrior.

Athena assuming the form of deiphobus, Hectors bravest brother, appered at his side. Hector saw him with delight, believing she was was his brother Deiphobus. Hector stopped his flight of running and turned to meet Achilles no fear in his heart. Hector took a spear from Deiphobus and hurled it at the fearless warrior, where it bounced off of Achilles shield and fell to the ground below him. Hector turned to his brother to receive another but deiphobus was nowhere in sight. It dawned on him that he was deceived by the gods. Hector, understanding his doom, said for all to hear.

“Alas! It is plain this is my hour to die! I thought Deiphobus at hand, but Athena deceived me, and he is still in Troy. But I will not fall inglorious,” saying this he reached for his sword at his side and rushed to meet Achilles for the long awaited combat. Achilles eyed the running prince from the top of the his shield where he waited in the position to kill. When Hector came within reach of the spear, Achilles threw with his mighty hand, aiming for the prince’s neck where his armour did not cover. Upon his death Hector, the dying prince of Troy told Achilles, the warrior of Greece, his last words.
“Spare my body! Let my parents ransome it, and let me receive funeral rites from the sons and daughters of Troy.” to which Achilles replied,


“Dog name not ransome nor pity to me, on whom you have brought such dire distress. NO! Trust me, naught shall save thy carcass from the dogs. Though twenty ransomes and thy weight in gold were offered, I should refuse it all.” Those were the last words Hector heard as he passed from this life to next.
Achilles, son of Peleus, stripped the body of its armour and tied cords to the feet, fastening them to the end of his chariot. He dragged the body in front all of Troy, showing all what he did to their beloved prince. Priam, the great king, was held back from throwing himself over the wall, from joining his son. Flecubas, his mother, in distress was more or less violent. Andromache, wife of Hector saw what happened to her love and fainted fearing what was to happen to her son, having no father to be there for him.

Achilles thus then rode the body back to the Greeks where he showed them what he did to Hector. He rode the body twice round the tomb of Patroclus. His death was avenged. Yet Achilles felt like he lost a part of himself when Patroclus died. No matter how many Trojans he killed, he will never find that part of himself. No matter what he does to try and avenged his friend’s death, Patroclus will be lost to him until he also meet his end. 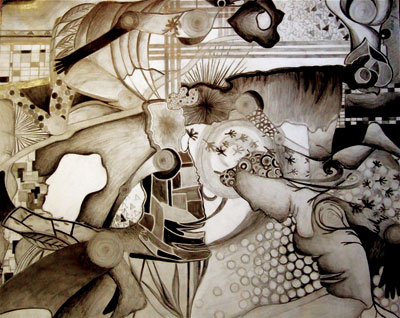 The author's comments:
This is my favorite part from the Iliad and I rewrote it in my own form and I hope you enjoy it.
Post a comment
Submit your own