Raja
The fire raved making the sky red as it scorched my skin, but I did not scream. I had to be quiet if they heard me I would die. I watched as our home fell to the ground tears springing into my eyes, knowing that mother was in there and I would never see her again. Brother and sister lay asleep, we needed to move, but I would let them rest a while longer. My nerves ran on edge as I remembered all the stories mother had told me of the Nazi’s all the horrible things they had done.
After a while they woke up, I signaled them to be quiet as I led them into the shadows of the street. The frosty night air breathed coolly down my neck as we trudged through the fearsome snow. We walked for hours searching for a place to be safe, a place free of the Nazi’s. I had given my shoes to Riftka long ago but it was so cold I could not feel my feet as they cried crimson tears. The sun was starting to rise, I cursed under my breath as I frantically searched for a place to hide from the Nazis.
In the distance a white building emerged, I urged brother and sister to run to it as the rising sun began to warm the numbness in my feet causing each step to feel as if I was running on needles but I ran on. As we got closer I realized it was the restaurant I went to for my 16th birthday it was expensive but my family had money, or they did. That day was the last time I had ate there a couple weeks later they put a woeful sign stating no Jews allowed. I glared at that same sign as we ran around the corner. At the end of the building was a cellar my heart sped up as I quickened my pace towards it. I yanked on the handle but it did not budge I looked around hearing the sound of people waking for the day. I pulled harder but again they lay still.
I took a deep breath clutching the metal handles as they dug into my hands cringing I pulled again my muscles straining, it broke causing me to fall into the snow. I stood up ignoring the pain. I herded brother and sister in to the cellar closing the doors behind me. It was dark inside the only light coming from the gap between the doors. It was cold but not on my skin but in my heart it was as if the fire had frozen my heart as it had engulfed my childhood home and my mother.
Sweeping the thought to the side I led brother and sister deeper into the cellar the light growing dimmer. The vague outline of crates and boxes protruding through the masking shadows. Ben clutched my hand tightly while Riftka sat on the floor sobbing. I sat down pulling them closer to me holding them to my breastbone as the sorrow fell from their eyes and somehow my presence took it away. But who was there to comfort me? Who was there to take away my tears? Who was there to let me be a child?
Standing up I whispered for them to follow me not wanting to risk being caught. Constantly bumping into boxes and crates we made our way to a distant corner. I sat brother and sister down telling them it was okay when I knew it was not but I couldn’t bear to tell them that were people out there waiting to kill us just because of the stars sewn to our shirts.
I waited for them to fall asleep their faces softening as their fears fell to slumber. I stood up and began to pile boxes and crates around us creating a fortress any Nazi child could easily brake but I still did it letting the rhythm soothe my fears each beat pushing them farther back, but like a predator they were still there and soon would emerge again.
I found a thin cloth covering one of the crates, taking it I settled into the corner draping it over brother and sisters quivering bodies. And then I watched. Time dripped in the darkness seeming to cause the hours to drift slowly by. I barely slept constantly afraid of being caught and killed. At night I hesitantly crept out of the cellar into the world above and searched for food to bring back to brother and sister .I let them eat most of it only eating enough to survive. All the day we would sit in silence in the same cramped positions trying not to move knowing the predator was ever looming closer.
We continued on like this for weeks until it became routine, my eyes only seeing the risk, the things we needed to survive. In the stillness my mind wandered pondering the change that had happened so fast, the change that had done so much, the change which I could not reverse, the change that I loathed.
Months passed the wheel burning towards the fresh lips of spring; the solitude was rotting my mind causing it to see what was not there hearing when there was no sound. My head turned with constant paranoia. Brother and sister didn’t notice all they did was wail in whispered shrill voices.

In my dreams I dreamed of murder, the rust colored blood surrounding me then the dream would end.
One night I went outside to collect food to see the hue of lights in the distance, it was high school graduation my heart yearned to be there. I had worked hard to graduate early taking every extra class that I could but now it was all in vain. In that moment I cursed my god. Where was the everlasting love that was was fabled of him what deed had my people done to be punished so.
I hated him. Never again would I turn my eyes to his face, never again would I utter his name and never again would I glorify it. Instead I would spit at his slightest mention. From that moment, my loathing for him surpassed even my hate for the Nazis and there was nothing he could do to turn my face back to him. My hate became me.
Towards the end of summer my insanity overcame me while brother and sister silently slept I ventured outside quietly breaking a window hiding its shatter in the noise of the day. I took the sharpest piece of glass and headed back into the cellar. Slowly I walked to brother and sister my eyes filling with tears, I was doing this for them they would be happy and they wouldn’t have to live in this suffering any longer.
I bent over Ben my lips brushing his forehead; I slowly took the makeshift knife and placed it at his throat letting it softly penetrate his snowy skin. He didn’t wake as I pulled it across his neck watching the blood trickle down his neck as his breathing began to stop until he sputtered taking his last breath.
I took my hand caressing his chin as the warm blood flowed over my hands I looked up Riftka was staring at me she stayed still as I crept closer to her. I placed my fingers to my lips as I extended the shard of glass to her neck while tears welled in her eyes I let the glass make a smooth line along her neck as I pushed harder she flinched the blood flowing faster. She began to gurgle and cough as she slowly died in my arms her hair clotting in the warm red liquid.
I was all alone surrounded by blood. I starred hollowly at my faint reflection in the red stained piece of glass.
“You killed them” I muttered while slitting my wrist my tears falling into the cuts the blood running onto the floor mixing with theirs my palms the shade of scarlet. I could feel myself starting to slip away as I remembered a song mother used to sing about a couple who could not bear to part and took each other’s life.
I began to sing it then as I slipped away wondering if I was going to hell.
“Meet me under the apple tree
I’ll bring the knife to great thee
And you take the plunge with silver gleam
And then we can be in each other’s arms in heavens dream
Until the apple blossoms blooming quick
Fall from the branch; the wick”
With each line I grew quieter until I was unable to speak. The sting in my wrist lay in the back of my mind as I cursed god one last time as my eyes filled with clouds of black. The kiss of blood lingering on my lips as the icy hands of death put my soul into his black cloaked pocket. 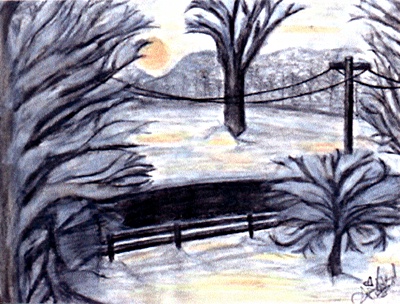