Life in the Trenches | Teen Ink

Life in the Trenches

Oh Alfreda ,
how I miss you and the old days. It has been very foolish and irrational of me to accept serving our country in these dreadful trenches thinking that I’ll be “Home before the leaves fall”. Life has been very difficult the past two years I’ve stayed in these trenches. The fear of death has never left my mind as the sound of the enemies’ exploding shells and sniper’s bullets lingers and loiters through night and day , in hope of consuming a passing prey. Not to mention them’ gas attacks which will burn our lungs and choke us to death. But don’t worry! We’re also shootin’ at them’ goofs and killin’ them too.
I have grown these two years used to the stinky rotten smell of dead bodies all around the trench and fresh flesh that rats and lice feed and nibble on. My feet are also beginning to swell and feel a little numb and ticklish . I feel that these might be symptoms of Trench Foot. Some soldiers had to have their feet cut off their bodies so other parts of the body won’t be infected. Others suffered days of extreme pain and eventually died. I only get little amounts of sleep as I’m in the front-line trenches in which attacks are more likely to happen at night.
But , things are about to get better as I’ve been informed I’ll be movin’ to a quieter and cleaner area of the trench where there is less attacks and fighting although some of ma’ mates say it’s quite borin’. But to escape boredom , I’ll be playin cards with ma’ mates , smokin’ coffin nails and tellin’ tales from home. That , of course , if luck is on my favor and I don’t die in my last days in the active part of the trench.
I hope my letter reaches you and to see you in the near future if I do survive this dreadful war. Send my kind regards to all my loved ones. 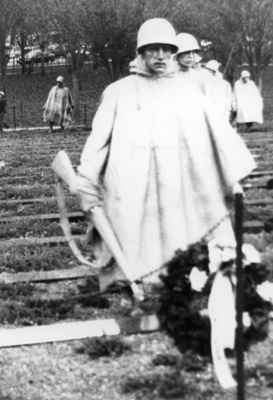