A pale slate of gray, hiding its light behind a blanket of clouds that formed dark silhouettes, like the characters of a puppet show. I stared up at the sky, and it stared down at me.
Someone was holding me, cradling a blanket and my frail limbs in their arms. I don’t know who they were. No one has bothered to tell me. More often than not, I try to take that as a license to forget.
But the truth is, the second thing my child’s mind etched into memory was her. The sky, with all its dancing shadows, was just a backdrop for the woman. I remember her swooped nose, pointing towards the sun like a cracked compass. Her plump lips, chapped and red with the bite of the air. Her soft, dancing hair, cascading over slender shoulders before being taken by the breeze and waved like a banner. She was smiling, I remember; smiling a lopsided smile. She shuffled me in her arms, and I gazed up at the woman and the sky; my world, and my home.
Then, as the woman glanced down upon me with glistening golden eyes, I saw the shadows in the sky that didn’t follow the river of clouds. These shapes cut the sky like daggers. They didn’t dance and soar and twirl. They stalked. With eyes pressed into the soil and growling a guttural growl, they cut the clouds with wings of metal. There were people inside, flesh and bone, but with blood as metallic as the beasts they piloted, pioneering angels of death.
I remember the stillness, then. Not a breath drawn from the people gaping below, eyes trained on the shadows. The air was lead; the earth unstable. The smile crumbled from the woman’s face. Her golden eyes relaxed, hollow, as they peered into the heavens and pled a silent prayer.
It was shattered softly. If we hadn’t been so certain it was coming, no one might have heard it at all. At first, it was less than a whisper, the soft whine of the bomb as it plummeted down towards our town. The closer it came, the louder the whine grew, until it wasn’t a whine, but a growl, then a roar, then the very yell of thunder itself.
And then it hit. First one. Then three. Then twelve. The planes dropped them like pebbles into a stream, and we died, with all the dignity of caged animals. I looked up and saw tears, wet and angry things, drip down the woman’s face. She held me close, ground quaking around us, the air thick with screams and dust. She fell to her knees, face buried in me; mine buried in her. Words slipped from her mouth in hasty whispers. Words I couldn’t understand.
The raid lasted an eternity. Each whining plummet marked a new dawn; each thundering explosion the rage of dusk.
Eventually, I couldn’t hear anything at all but the soft ringing of my ears. But I could feel it. The ground tremored as the peace itself was slaughtered without mercy, the silent whispers of the dead stolen in each vibration.
It grew dark.
The air dripped with something thick and metallic and crimson. I could taste it. The woman’s body grew still, then cold, then stiff.
When I looked up, I saw the fractured sky streaked pink with the setting sun. I saw the shadows leap and dance in the clouds. I felt the silence in my very bones.
And I cried.
The next thing I remember was the hands. They were rough hands, skin carved with a lifetime of worries. Grease and grime coated each finger, and they slid as they rubbed against my skin, fastened around my waist, and hoisted me out of the cold, stiff world below. These calloused hands held me up with indifference, their owner inspecting me with dull green eyes under a furrowed caterpillar brow.
I stared up at the man, and he stared down at me. A red band with a white circle and black insignia wrapped around his arm where he laid my head. The air was cold, but he was warm. I nestled into him, and after a moment’s hesitation, he hugged me close.
We walked away. Over his shoulder, I saw the woman and her tumbling curls tugged by the wind staring at me with her hollow gold eyes.
She was smiling. 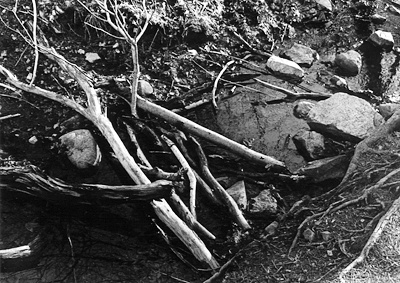