King looked out from the edge of the cliff, as far as he could see trees littered the valley below and in the open meadow, deer grazed. He wanted to be King of this land one day, like his father before him, he wanted to be the greatest buck the valley had ever seen. The only thing that stood in his way was the current leader of the herd, Draco. He was ruthless and by far the strongest buck King had ever seen, it would take a lot to beat him. His mother, June, the alpha doe of the herd walked up to him.

“Hi mom, isn’t the view great!” he exclaimed, his eyes locked on the valley below.

“I like it better up here. Mom, be honest, do you think I’ll ever be King of the valley?.” he asked.

“Of course! and I’m not just saying that, you can do it, you just have to believe in yourself and let your heart guide you,” she told him.

She looked so wise, her mother always used such strong emotion when it came to the whole being King thing. When King was born they named him King because they had faith that one day their son would become King of the valley, the strongest buck anyone had ever seen and even though his father passed because of hunters, his mother still encouraged him on.

“Of course I do but he’s gone and we have to face the facts,” she said with a sigh.

They never spoke of his name. He was a legend around here, and his death shook everyone, but hunters hunt and animals die, that’s how life went. After that, the bucks fought for who was King and King didn’t participate because he was just a yearling back then, not nearly old enough to lead a herd. The bushes rustled and King knew who it was.

Gunshots fired behind them but they weren’t going to go out today, not like this and King had dreams, a herd to lead one day. He stopped when the gunshots stopped firing.

Then he saw her, his mother was slung over the man’s shoulder and being carried away, she had a single bullet wound.

“Mother… No,” he said sadly as he turned and walked away.

“The death of my mother is tragic, which means my sister, Celine, will take over as alpha doe of the herd,” King announced.

“What is going on here? I believe the alpha buck will announce these things,” Draco said infuriated.

“This is my mother we’re talking about, I’m allowed to be the one to let the herd know she’s dead!” King said back.

“You better watch your tone, King, or you're out…” Draco warned.

King left and went back to the cliff and layed down. Why was everyone he loved dying? The hunters, that’s why. He had to find out why they did this. He stood up and walked down the hill and took off on the journey that would change his life, forever.

He had been wandering around parts of the valley he’d never seen before for days only stopping to eat, drink, or take a small sleep break.

“Who’s there?” he demanded.

A doe stepped out and a fawn stepped out behind her, they looked at each other and that’s when it clicked.

She nosed her fawn and smiled, King hadn’t seen Summer since who knows when, they used to play together as fawns themselves but her herd moved away.

“You're the last doe I thought I’d see,” King said.

“Same to you, buck. Where’s your herd? This is a bit far from home.” she said.

“I decided to leave,” he admitted.

“Oh. Why? If you don’t mind me asking,” she said gingerly.

“Well, my mother has been killed, same with my dad, and I thought I could find out why humans did it,” he said.

“Well, if you want to learn about the hunters the best place to go would be the caves,” she pointed out.

“Thanks,” King said and went on his way.

The caves were a five-day trip away so he would have to break it down by day, he rested a mile ahead from where he met summer but right when he was about to lay down Soraya came running.

“Help! Hunters!” Soraya yelled and bolted in the other direction.

King followed but they were too late, all that was left was a pool of blood where she must have been shot.

“Soraya, I’m so sorry,” King tried calming her down but she was beside herself.

Who wouldn’t be? Her mother had just been killed and taken by humans, what else was she to do?

“I can’t believe they would do such a thing!” Soraya cried.

He led her home and went to the leader to tell him what happened, Soraya was still in shock by the time they got there.

“I’m sorry to inform you but your daughter is dead, the hunters got her and this little fawn saw the whole thing, she might need a minute to calm down,” King told him.

The leader simply nodded and King was invited to spend the night with his herd but the next morning he went on his way.

The second day was tough, rain had started to pour and the wind was picking up, but he had to keep going, for his mother and father.

He finally made it to the caves and what he saw astonished him, the walls had writing on them that he couldn’t read but the pictures helped but right when he started looking a man showed up.

“Looking for something sir?” the human asked, “You look cold.”

“Why is he talking to me? I’m a deer, I should probably run,” King took a few paces back but the human appeared behind him.

“Don’t be afraid, I only want to help you answer the question as to why hunters hunt you,” the man said.

“How did you know?” King asked suspiciously.

“Do you want answers or not?” the man asked and King nodded.

The man pointed to the writing and began his story.

“Deer are mysterious and ancient creatures, they have ancestors dating back some 10 to 20 million years ago where they first appeared in Mongolia during the Miocene and Pliocene geological epochs. First, they spread into Asia and Europe then they crossed the land bridge in Alaska leading them into parts of North America. The North American deer continued evolving until a mere million years or so ago There are many species of deer including elk, moose, reindeer, whitetail deer, mule deer, and more. Then we get to the hunters,” the man said and King’s eyes stretched wide at what he just heard, “Many families gather together in deer season for a  variety of reasons, from starting with friendship and tradition. Native Americans were deer hunters who didn’t do it for fun or sport, they worshiped their food and only hunted when they needed to and that evolved into what humans today call a sport.”

King was surprised by what he heard, he had so many questions, why did they do it and why deer? This was what he had been looking for all along.

He said goodbye to the man and thanked him for his help. He went home and stood before his herd and repeated what the man had said.

“And that’s why were hunted today,” he finished, “We need to take a stand against the humans and remind them of what is important.”

“And how do you suppose we do that,” Draco challenged.

“I believe I can help you with that,” the man said.

Everyone looked at the man surprised he could understand him.

“You followed me?” King asked.

“Yes and I’m here to speak to them for you,” the man said.

“Then let’s go,” he said to the herd and led them away but Draco got in the way.

“You're not leading them anywhere,” he said, “And this time you’ll be fighting me or leaving.”

He charged at King and they met antlers to antlers battling it out, King pushed him back and Draco reared up only coming down to meet King head on but King was ready, he took Draco down and was ready to charge again but stopped. He had won.

Draco did as he was told and left the herd then King led the herd where they saw the humans last. There was a human with his son and they and guns but before they could shoot the man he met walked up to them.

“The deer are here to speak,” he said.

“Move out of the way crazy,” he pushed him out of the way but the man had done something to make it possible for the deer to speak to him and he nodded to King.

“We are here to say,” he started but the hunter interrupted.

“How can I understand you?” he asked.

“Because of that man now let me speak,” he ordered and the man nodded so King continued, “We have been hunted for years because of our meat but never for fun and we are here to put an end to it, stop hunting us, we have families too and we have lives to live.”

“Not a chance,” the man said and raised his gun but King knew what to do.

He charged at the man throwing him with his antlers and the other deer charged, the song called for help and now it was war. The humans and deer battled but the deer were winning, there was blood on antlers and gunshots but in the end, the deer won and took a stand in front of them.

The men did as told and left. King had done what he had thought he never could have done, stopped humans from destroying the deer.

“I won for you mom and dad,” King looked up and said then walked to the edge of the cliff.

He did it and looked down at his herd, that felt good to say, his herd, frolicking in the meadow below as he was now the King of the Valley, the legend who got rid of humans and achieved his kingly dreams as King, the deer who did it all. 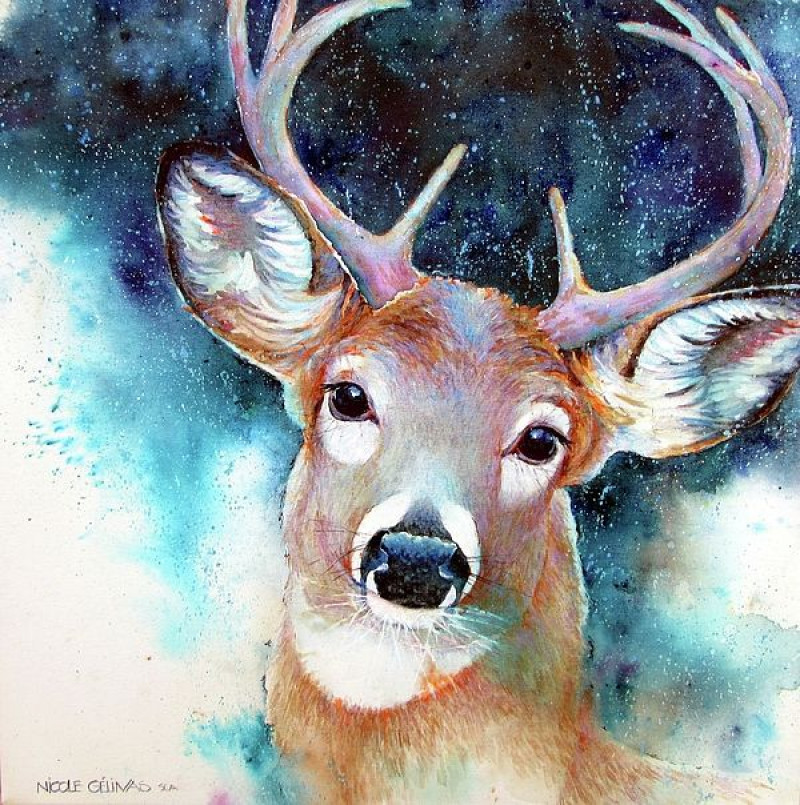 This is an independent story write that I whipped together, it follows the journey of King, a buck, who went above and beyond to find the history of his kind. I hope you like it and leave a like and comment! This also has some real history of a deer in it.