I found out what love was when I was seven. It was hot: June, I think. I was sitting in the back of the bus, on top of the world, playing games like Truth or Dare and Bloody Knuckles with Tom and Doug and Shannon. They were my friends – handpicked by our mothers, thrown together in playgroups and classrooms and on buses, and they played their parts well. I liked them.

And as far as I could tell, Doug and I were in love. We’d been in love since Friday, when he told me that it took 417 seconds to get from his bus stop to mine, and that he couldn’t stand those 417 seconds. Then, he shared his Oreos with me at lunch.

And everyone knew it, too. You don’t share your Oreos with just anybody, and soon enough, the whole first grade knew that Doug and I were going to get married. And maybe, just maybe, we were going to kiss. And from what I could tell from the hot, sweaty air and loud shouts of life that filled the bus, now was the moment.

I tried not to look too excited – that wouldn’t be cool, none of the movie stars smiled while they kissed – but I was. Secretly. And I was kinda glad that the big kids had dared us, because we’d been in love for six whole days, going on seven, which would be a whole week, and I was starting to worry that maybe I wasn’t pretty enough or something.

“C’mon, Doug, if you love her, kiss her! It’s not that hard!” I blushed. So did Doug. He didn’t like it much when his sister taunted him like that. She was in third grade, the upper school already, and we were all kind of intimidated by her. She wasn’t the kind of person you’d want breathing down your neck as you shared your first kiss with the man you were going to marry, but I supposed we would just have to deal with it. Maybe it’d turn into a funny story we could tell our relatives over dinner sometime.

The other kids on the bus started chanting for us to do it, and finally I couldn’t hold back my smile as our faces turned redder and redder and redder. And then, our face kinda ... collided like, and my nose hit his nose and our teeth bumped each other. But we fixed them all right – Doug kinda pushed my face a little to help – and as soon as I thought we were gonna actually kiss like they kiss in the movies, he pulled away. All the other kids on the bus were cheering, and I slumped down in my seat, my shoulders and ears turning red from the embarrassment of it all. It was supposed to be special. Special! We were in love!

But it didn’t really feel special at all.

And after, it didn’t seem special either. Especially when Doug turned around and told his sister that she owed him a quarter because ‘that was the eighth.’ When I got older, I got to know the term ‘used.’ But right then, on the crowded bus where everyone seemed far, far too loud, all I knew was that Doug was getting paid to kiss me, and maybe everything he had done, even sharing his Oreos with me, was just to get that quarter.

I wanted to cry.

But I didn’t get further, my chest heaving from my little sobs, my fingers trembling as I punched in the code that would open our garage door. I wiped away at my eyes as the garage growled open, sniffling. But as son as these were gone, I cried new ones, looking into the big garage to see nothing but big open space. My mother was out, and I was alone. I was alone, and I had no one to talk to. No one to tell about Doug, no one to tell me that they loved me, and that they wouldn’t kiss me just because they wanted a quarter.

Kicking off my shoes, I shove the door open, creaking filling our empty house. And a jangling filled my ears, followed by loud scratches and thumps and more jangles. I forced a smile onto my face as Mork fell into view, tripping over the paws that he had never fully grown into.

“Hi,” I said, sniffling, dropping my backpack on the floor. His tail was going so fast that I could hardly see it, and he ran around me in circles, jumping up on me, kissing my face mercilessly. I giggled a little, turning my face away from his slobbery tongue, and watched up the stairs. Mork followed, right behind me, his tags jangling as he bounced along. He continued trying to say hello, and I finally turned to him and smiled. Obediently, he sat, plopping down and looking straight at me with his big, brown eyes.

And it was then, that moment, that I found out what love was.

So I knelt down and hugged his big, soft head, which nestled right against mine, some of his hairs sticking to my tear-stained face.

And then I stood. I walked to the cookie jar, and, standing on my tiptoes, I got myself an Oreo, breaking it in half and pouring myself a glass of milk. I gave the other half to Mork, who ate it all in one bite.

“Thanks,” I said, crumbs dropping out of my mouth and onto our white tiled floor. “I love you too.” 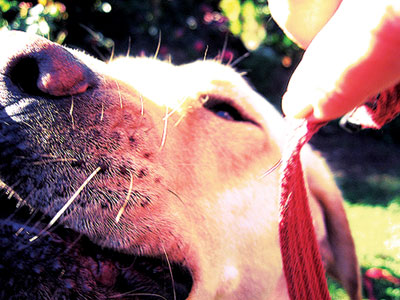 Favorite Quote:
"Be who you are and say what you feel because those who mind don't matter and those who matter don't mind." - Dr. Seuss

View profile
this was really good!! i lloved it!! it made me so sad though that even at such young ages kids take advantage of eachother... :(
AsIAm PLATINUM said...
on Sep. 18 2010 at 8:40 am
AsIAm PLATINUM, Somewhere, North Carolina
48 articles 3 photos 606 comments

The Good: This was so cute!  Innocent love - you did a really great job portraying it.  Never, EVER, stop writing!

The Bad:  This doesn't need to be improved!

The Random:  You are one of my favorite authors on here - I have been reading your stuff because I loved Spargel so much. :)  Check out mine?

Aww! This story made me smile.

Something I really like about your work (I've read several by now) is how you don't really end it. I mean, you do, but it's kind of a cliff... letting the reader take what they may from the whole experience. I've really enjoyed reading your writing so far, almost all of them brought a smile to my face :)

View profile
wow this is amazing this is one of my favs on teenink
cross-i'd-leopard said...
on Aug. 10 2009 at 4:07 am
one of the best things I've read on this site. i love how u leave it all open at the end
Voice said...
on Jul. 8 2009 at 10:44 pm
Voice, FortWalton, Florida
0 articles 0 photos 10 comments
View profile
That was the cutest thing I ever read, I loved it. I love my dog too, but he's just a boy he acts like one ignoring me mostly. He trys to act like he doesn't love me. When I come home from school sudently he remembers (secretly hoping she tells Doug off the next morning)