Ever since I can remember, I've lived in a fantasy world. like when I was little, my favorite sory was Handsel and Gretel. Every time Grandmother told that story, I listened with equal parts enthusiasm and enchantment.
When I was ten years old, I had a penpal from South Africa. His English wasn't the best, and he had spelling errors in almost all of his sentences, but my pen pal from South Africa was my first real friend. He would describe to me the conditions of his school, and the teachers, and how his mom would have to go to market every day, if they wished to have food on the table to eat.
Now, twenty years later, I was home alone on a Friday night, with a bowl of ham and beans, a television set, and a copy of The New York Times, which was opened up to the Dear Abby section:


I am thirteen years old. I am in love with my sister’s boyfriend-he is twenty-three and plays soccer. He won’t even notice me! What do I do?!


Silly kids,they had a lot of growing up to do. I looked up from the television set, where “Wheel of Fortune” was on. Bored, I flicked the remote control to the next channel, where Angelina Jolie’s white teeth glistened from the television screen. Damn, she was gourgeous!

But it would take a certain Chinese supermodel to make me fall out of love with Brad’s beau, and in with Ms. Yi Mi Ling.

It was my first day on the job when I first met Yi Mi, and she certainly didn’t make the day any easier for me when she sat in the cubicle next to me, wearing patent, leather boots, hot as a fire engine, and offered me cinnamon Altoids chewing gum.

Or maybe I had heard wrong-seriously, I didn’t know where the leg stopped and she began.

Throughout our time working together, I got to be acquainted with the Goddess. She had a picture on her desk of a dark, handsome basketball player, When I asked the apple of my eye about him, she said:”Oh,him?That’s Michael, my boyfriend. Except he lives in Australia,so we don’t get to see each other often.”

Then, Ms. Ling gavr me a card, like a baseball card, with the intimidating,sinister grimace of Mrt. Perfect staring down at me-scrappy, little Jason Canaan; Ukranian-Czech bred; five-foot,six inches.

“Michael Mills”, the card read. What was I to do with this?! Then, the little vixen turned around to continue chatting on Face Place.

That gave me an idea. So when I went home that evening, I signed up and made an account...on FacePlace.

I scanned the image from the baseketball card, then uploaded it onto my computer to make it my profile picture.

“Michael Mills”, I typed:”twenty-seven years old.’in a relationship’ with Yi Mi Ling.” Then,I added her as my friend.

The next couple of months, I looked for some sign that Yi Mi knew of my devious plan. but no, she didn’t.or if she did, she gave me no way of knowing. and so, I began to relax; as I sat typing at my computer all day, I fantasized of dying in battle, over the conversations of my co-workers. Maybe then my girl would notice me.

Eventually, my guilt forced me into confessing my lie. Our office held a holiday in December, at this Italian joint. I was determined to look my best-as I walked in past the walls painted to resemble the Tuscan countryside, I kept on adjusting my tie. I was awaited by soft opera music playing.

“Jason!”, my boss greeted me enthusiastically with a hug and a thump on the back. His breath smelled strongly of garlic.

As I sat down at our table,I noticed that the man sitting next to my chica looked vaguely familiar... 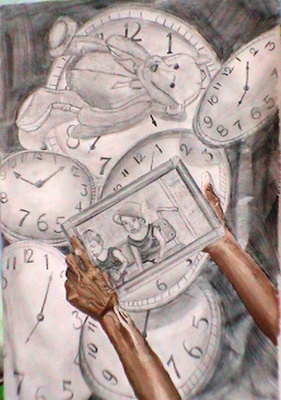 The author's comments:
This was a piece I wrote for a writing class-unfortunately, I never got to finish it. Constructive criticism is encouraged.
Post a comment
Submit your own