Story of my life:

" Well at least she has an excuse. She's blonde."

"Must be the teacher's pet!"


Stereotype. My brother and I go through them all the time. I'm the valley girl, idiotic, dumb blonde. He's the nerdy little math freak.

Isn't it strange how we are stereotyped? You don't stereotype your friends, so you stereotype people you don't know? I don't understand it.

I'm just the girl in class who does some homework everyday, but is cramming for the big test on Monday morning, the girl who gets nervous onstage. I'm the one who bought a candy bar, because no matter how fat I get, I don't care what people think about me, because I already know I'm not what they think... If that makes sense!

But even though I don't care what people think about me, you know, since it's usually not true, sometimes I wish they wouldn't think about me at all. They think I'm the anorexic, annoying sqeaky-voiced cheerleader, who looks down on others and makes them feel bad, but I'm not!

Sometimes I wish when they say those things, if they are really thinking at all!

Once upon a time, I was a kid. A kid who had lots of friends. Years later, I'm a dumb blonde, a bully, who puts people down to feel good about herself. Now, all my "friends" whisper about me with the others.

I don't know about you, but I don't think it makes any sense. Like I said before, I used to be a kid. Now, I'm just a stereotype. 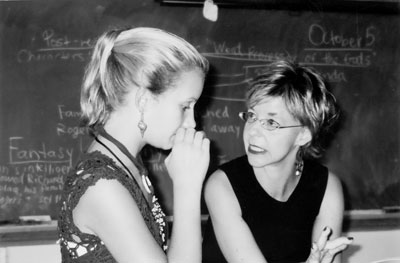 The author's comments:
This is a story written from a kid who is sick and tired of all the sterotypes... But even though this story is not about me personally, isn't it the truth?

Thank You for reading!

Rate and comment my story please! I would REALLY appreciate it!!! :D

View profile
Thanks! I've been told that I should extend my stories, but I've just never been able to continue them due to writer's block.
silence-is-loud GOLD said...
on Aug. 16 2010 at 8:43 am
silence-is-loud GOLD, Chicago, Illinois
10 articles 0 photos 135 comments

View profile
that was good. you should actually make it a story though.
PenInHand GOLD said...
on Jul. 20 2010 at 5:09 pm
PenInHand GOLD, Fayetteville, North Carolina
12 articles 0 photos 63 comments

View profile
I'm really glad you like it! I wrote this in just a few minutes, so I didn't edit, and I've been told to cool it with the exclamation points before... Bad habit I guess? Anyway, Thanks for reading! I'm glad you like it. =]
PenInHand GOLD said...
on Jul. 20 2010 at 5:07 pm
PenInHand GOLD, Fayetteville, North Carolina
12 articles 0 photos 63 comments

I really liked this one. I liked how it was from the perspective of a "bully" and not the bullied. I love how it was typical but not at the same time. Have to agree with a comment below about being a little more subtle. Too many direct statements that summed up the piece in just a few words can make the piece feel like a lecture. Also, avoid the use of exclamation points at ALL COST (*exception in dialogue). It's really a minor mistake, but is a big turnoff for a reader.

Good job. I really do like this one. Especially the beginning lines. Really cool.

View profile
I can understand what she is trying to say especially, beacuse I have been known as the 'teacher's pet' since I can remember. You could make it a bit more smoother, but I like this story. I'm giving it a five out of five.
Rebecca Phifer SILVER said...
on Jul. 5 2009 at 10:27 pm
Rebecca Phifer SILVER, North Augusta, South Carolina
6 articles 0 photos 9 comments
View profile
I like the moral, but try to be more subtle. This sentence doesn't make sense look at it again, "Sometimes I wish when they say those things, if they are really thinking at all!" You may just have a typeo. Thanks for commenting on my story, "You don't know me." You ask me to comment on yours so I am.