She was a young woman in her early twenties who dreamed of being an actress. Every other weekend, she would go to the theater to enjoy an escape from reality. Oh, how she loved the glittery dresses,lavish sets,the lace! The men declaring their love for the women in their lives with a song, the affairs,the excitement, the belting of high notes as several voices joined to create one single, harmonious falsetto. and,best of all: she got to dress up and had something to look forward to, an escape from the monotonous pattern of work,coming home,cooking,cleaning. Monday it would start all over again.
She had been planning what to wear for weeks now. She would wear an evening gown of bright crimson, kitten heels, and her new hat,the one with the bird on it. For once, she was someone special-a VIP!
It was a treat, the way the ticket boy would call her "Maam" and look at her, as if to admire her beauty from afar. She was not a beauty in the classical sense-her hair, ordinarily tangled and the same dreary color of chestnut, was pinned back for once. The young woman's skin, normally the color of milk gone sour, was now shining luminously like the moon. Her eyes possessed a fiery zest for life.
As soon as she'd walked past the ticket boy, into the auditorium, she could feel all eyes upon her as she looked for Seat 29B."29B,29B",said to herself. At long last, after much searching, she managed to locate her seat. Seat 29B was towards the front,next to a middle-aged man who looked like he must be a professor, and his wife on the right The seat to the left was empty.
"Hello.",said the professor's wife, a busty woman in her mid-thirties." I take it you're a regular?"
"Yes. This you're first time?"
"Oh,no." The professor’s wife chuckled. "We've been coming here for ages now."
"Oh."
The lady opened the flier to read:
"Passion. Drama. Intrigue. Brought to you live by the American Theatre Troop."

A boy of about eighteen years of age sat down on the seat to the woman’s left. He was about five foot-six, relatively slight of frame, with side-sweeping bangs that looked as if they must have been bleached by the sun. The boy turned to talk to his friend,pointing to the flier. The lady could hear bits and pieces of what they were saying:”Tenor... Brazil...yes,he is.” Every now and then, they would take turns looking inquisitively at the woman,before resuming with their mundane chatter. In a moment, the lights would dim as the announcer welcomed people into the actors’ magical world:
“Good evening, ladies and gentlemen! Please take this time to turn off all phones, cameras,and electronic devices...”
The announcer’s voice droned on and on, before the curtains,at last, opened. It was an excellent performance, in which a woman who thought she had fallen in love found out that her beau had impregnated her friend. Tension rose in a scene in which the woman,on the verge of a breakdown,had confronted her husband. Then, the lights came back on for intermission.
Pretending to have tripped in her heels on her way to the lavatory, the lady was helped by the boy with the side-sweeping bangs(“Oh,thank you so much”, she had said,and smiled sweetly.) When she got there, the woman checked herself in the mirror. Hair in place. Feather in place. Makeup:smeared. Reapplying a touch of maskara, she was good to go.
While looking in the mirror, a curious thought had crossed her mind. “I shall never fall in love”, she thought. Let them think that she had fallen, that she cared enough to let anyone in. It was rather like a play-it was a play,to tempt men, let them sniff food off of your plate;meanwhile, never to fulfill their hunger for her flesh.
“Excuse me”.
“Oh, sorry.”, she awoke from her revery with a startle. An elderly woman was reaching over for some soap from the dispenser.


After making her way past the throngs of socialites discussing art and literature, and the multitudes of high-school sweethearts, the lady approached her seat. As she was on her way past the boy with the side-sweep bangs, she caught a whiff of what his friends were saying:
“Who does she think she is...strutting around...ostrich-feathered hat!...thinks she’s better than everyone else!”
Turning back out of the aisle, drops of dew began to run down the lady’s cheeks. No-she never cried, she could not cry. Not wanting anyone to see, she rushed to the bathroom, past the throngs of socialites(who were now sipping wine)and the sweethearts cooing in each others’ ears. Looking in the mirror, the lady saw what a clown she had been! Her maskara smeared, her makeup smudged, she went into the stall and cried-no;sobbed-such as she had never before. Like drops of dew, tears fell onto her dress. She yanked off the hat-the damn hat!-the hat with the feather and bird on it, which she had bought so lovingly just weeks ago. For how long she stayed there,she did not know-the show was probably starting again-but it did not matter;none of it mattered,not the dresses,nor the sets,nor the lace. The lady remained a clown in peoples’ eyes, beneath all the layers.
Little did she know know that she was not the only one in mask... 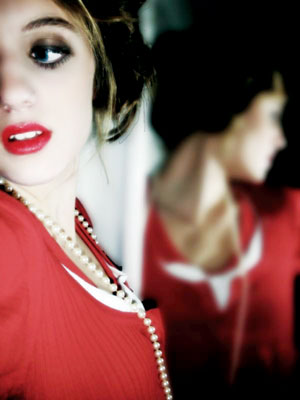 The author's comments:
This was inspired by "Ms. Brill" by Katherine Mansfield.
Post a comment
Submit your own