What Mother Told Us | Teen Ink

What Mother Told Us

My mother told us that there are certain things you just can’t live without: love, understanding, joy. . .She also told us that she wasn’t on that list, and that we shouldn’t mourn her when she was gone, but give thanks for the thins we still had. That was the day Mother told my brother and I that she had cancer.

Despite what you might have expected, life for us didn’t go completely off the rails. No matter how short a time Mother would remain with us, she wasn’t gone yet. So instead of falling apart we decided to make the most of the time we had left with her. If we kept a cheery face, the changes we had to make in our lives didn’t seem so scary.

There came a time when all of Mother’s beautiful red hair fell out because of her chemotherapy treatments. She refused to wear a wig because she said it covered up who she was. She didn’t have hair, and she didn’t want to look like she did. Besides, what matters is what’s on the inside.

When it was Mother’s time to go, she knew it. She gathered Spencer and me around her bed, and she told us that she was going to die that day, and that it was okay to be sad, but that we should go on living like everything was normal. We held her hands as she faded away. She looked so peaceful that it was hard for me to grasp that she was really gone. I childishly held on to the idea that she was just sleeping, and that tomorrow morning she would wake up and be all better.

After Mother passed, we went on with our lives, because that was what Mother would have wanted us to do. We did our best to keep our grief private. It was harder than anything I’ve ever done before, but through it all, we never forgot what Mother told us. 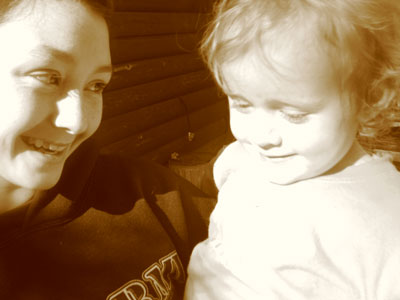 Favorite Quote:
Maybe our favorite quotes say more about us then the quotes themeselves