Splash! The water rippled as the six-year-old girl playfully hit the surface. She giggled as her pale skin and glossy brown hair became wet. The girl leaned back in the tub and closed her big, hazel eyes, slipping underwater. When she opened her eyes again, she saw dozens of colorful fish swimming to and fro around the rainbow reef. She gasped at the brilliant colors; her tiny hands flew to her tiny mouth. Surprised that she could breathe underwater, and realized her arms sparkled as she moved them.
The little girl held her arm out, her hand was webbed and tiny blue scales were scattered, glistening on her delicate alabaster skin. Excited, the girl tried swimming towards glimmering fish, but only one leg worked. She glanced down. Instead of feet, there was a tailfin, swishing back and forth.
‘Wendy!’ a faint echo of her name being called, she quickly swam to surface.
“Wendy!” she opened her eyes and found herself back in the bathtub. Wendy’s name was called again when she looked her fingers. They were wrinkled, puckered, pink, normal human hands. Crawling out, Wendy dried herself off and the struggled with her yellow nightgown. She spotted a empty toilet paper roll after she brushed her teeth. Wendy peered through the hole.
A lush green island loomed over the bright, blue sea.
‘Land ho!’ a man shouted from the crow’s nest. Wendy leaned on the rigging and then turned when a short, fat man shouted ‘Cap’n!’
The bathroom door swung open to reveal an elderly woman, with a hanger in one hand and wooden spoon in the other.
“Hook!” Wendy cried as the woman advanced.
“Give up, child,” the old woman said in a mimicked, rough man’s voice.
“Never!” Wendy stuck out a little fist and ran past her grandmother.
“Blast you, Peter Pan!” Wendy’s grandmother yelled as Wendy ran into her room and jumped onto her bed.
Wendy’s grandmother followed and wrestled the girl until Wendy was laughing from being tickled. As her grandmother tucked her in, Wendy pointed to the ceiling, where glow stars cling.
“The second star to the right and straight on till morning,” she whispered.
“That’s right,” her grandmother said quietly. “Goodnight Wendy,” she kissed Wendy’s forehead.
“Night, Nana,” Wendy yawned.
After Nana left Wendy’s bedroom, she peered through her window. A shooting star flew by. Wendy closed her eyes. “I wish to meet someone like Peter Pan.
Wendy got under the covers and hugged a stuffed doll close to her heart. “Night, Tiger Lily,” she said as she danced with the Indians of Never-Land. 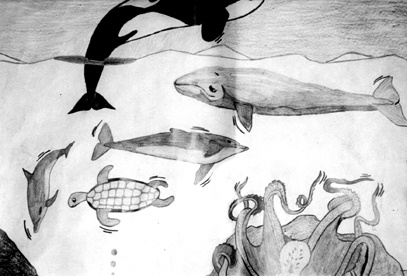