Leaving the Past Behind | Teen Ink

Leaving the Past Behind

Rhonda ran the brush through her hair again and applied the last coat of lip gloss. Beautiful, she thought. Something flinched in the back of her mind, but she brushed it back with the rest of the forty years of memories she had there.

Adjusting her black velvet dress strap, she walked down the stairs. Aren, her latest boyfriend, was waiting outside. She giggled. “Hey, Aren!”

“You look exquisite,” he said, smiling.

Rhonda frowned. “Exquisite?” Was Aren using one of those SAT words again?

“Yes, exquisite,” he repeated. He presented her with a bouquet of roses, which she gushed over, and then she stepped into his new, expensive car to drive to the event. Rhonda enjoyed the feeling of costly leather chairs more than she enjoyed the feeling of love. How could she not? She had never known love, but prices were priceless to her.

She stepped out of the car when they reached the party room. Rhonda’s black high heels collided with the gravel. She took Aren’s arm and they strode into the party together.

“Isn’t this great?” Rhonda whispered to him as they walked down the velvety stairs to the ballroom. “It’s the hottest event of the season, and we look great, too.” She fluffed up her blond hair.

“Every event is the hottest event of the season to you,” Aren replied, laughing. Rhonda joined in loudly, even though she had no clue what she was laughing at. But sure enough, a few of Brookville’s socialites turned to look at her.

Aren motioned to go over to the table of hors d’oeuvres, but Rhonda rolled her eyes. He was so stupid sometimes. He reminded her of a crush she had in junior high- total sweetheart, but no idea how to act in public. Like my dumb friends, she thought bitterly for a moment before shoving the thought back into the discarded pile of memories.

Rhonda steered herself and Aren to a circle of Brookville socialites. Grabbing a tiny martini from a passing waiter, she quickly said, “My G-d, don’t you look mahvelous, Tina!” to Tina Brown.

“Oh- er- thank you, Ms. Dale,” she said. “And you look quite fetching yourself.” She continued gossiping with the others as Rhonda gushed out a stuttered, “thank you so much, I don’t look that good, Tina darling,” and attempted to join in the conversation.

“Rhonda, Mrs. Van Doren’s over there…” Aren said. “Didn’t you want to ask her about feeding your dog when we go on that vacation?”

“Oh, thanks for reminding me!” Rhonda said, and Aren began to walk over to Mrs. Van Doren when he realized what she meant. “Did you hear about our vacation?” Rhonda was asking the social circle.

There was an awkward silence before Rhonda proceeded to tell them the first few details of her and Aren’s trip to the Bahamas next week. They stared at her, and Tina said, “Have fun on the trip, then,” and they continued to talk about what they’d been talking about before.

Rhonda just stared at them for a few moments.

“Didn’t you want to talk to Mrs. Van Doren, Rhonda?” Aren asked her.

“OhmyG-d!” came a shout from one of the socialites. Everyone looked up the stairs to where she was looking, at a woman with curly black hair in jeans and a T-shirt that said, ‘Writing is My Life’, who was clutching a book and shying away from the crowd.

“Who the heck is she?” Rhonda asked, even though she knew.

Aren was pretty shocked too. “It’s Leah Jensen. She wrote the Circle of Fire series. Haven’t you heard of her?”

“Of course I have,” Rhonda said. “How can I not? I went to high school with her.”

“Yeah, and she was the most annoying little b**** you ever met.” Rhonda shoved another set of memories to the back of her mind.

Aren shrugged. “Well, I love The Circle of Fire.”

“Is there a movie based on it?” Rhonda was irritated at Aren’s attitude.

“Not yet, but they’re planning to make one.”

A fussy-looking woman with sunglasses and a clipboard made her way to the top of the stairs next to Leah, who was looking down at the crowd curiously now. “We are definitely not in the right place,” the fussy one said.

“No, this is the right address,” Leah said. “Just the wrong room. There’s probably a party next to the book signing, that’s all.”

The fussy woman eyed the book in Leah’s hands. “That’s not anything from your series!”

“Remind me again how many times you’ve read Harry Potter.” Then, from the look on Leah’s face, she said, “No, don’t. Let’s just find out where we’re supposed to be. This thing starts in half an hour.”

“Which is plenty of time! I’m going to find someone who works here, and find out where the book signing is. You can do whatever you want.” Leah started down the stairs, and the woman rolled her eyes and looked out the door.

Leah started looking around, and upon finding no employees, walked over to Rhonda and Aren. “Do you know where my book signing’s supposed to be?”

She smiled. “Sure.” She pulled a pen from her jeans pocket and signed the piece of paper Aren had given her. Rhonda was frankly disgusted.

“Um, Aren-” she began, but before she could say anything else, Leah looked closer at Rhonda.

“Yes, that’s me,” Rhonda said, resigning herself to the fact that she would have to do this.

“I haven’t seen you in a long time! So- how’re things going?” Leah obviously also realized the awkwardness of the situation, given their past.

“Fine. This is my boyfriend Aren.”

“It’s great to meet you, too!” Aren was treating her with a respect he’d never shown Rhonda.

“Aren, weren’t we going to talk to Mrs. Van Doren?” Rhonda said through gritted teeth. She was almost shaking with the effort of stifling the memories that were about to flood her mind.

Once they were out of earshot of Leah, Rhonda yanked Aren into the courtyard. It was a pleasant evening, and a cool breeze blew through the pastel-colored plants in the yard, but all Rhonda could feel was pain. Pain like she hadn’t felt in a long time, the pain that she’d been pressing away with weights but had been harder and harder to keep back lately.

The images burst into her mind, clear as anything, clear as Aren’s concerned face in front of her. Her father hitting her mother, her brother yelling at her, her little sister sitting in a corner sobbing. The shouting teachers, the shattered beer bottles in her living room, her shrieking aunts at funeral after funeral. Her friends leaving her one by one as they led new, successful lives; her best friend screaming that she was worthless; Leah laughing with her new friends. The glaring disco lights at clubs; the penknives behind glasses at the bar her parents didn’t know and didn’t care she went to; her first time having sex in a dark alley with some guy she didn’t know. Blood spilling on the streets as her boyfriend murdered the leader of an enemy gang; then the pain as he went after her. Throwing up on the floor at her cashier job; how high she got on meth- then the hangovers; the powdery white paint on the walls of the rehab center. It all blasted into her mind.

She burst into tears and collapsed onto the black steel bench. Aren comfortingly placed an arm around her shoulders. “It’s OK, Rhonda. It’s OK. You can tell me.”

Rhonda took a few deep breaths and then began to spill. “Aren, my life- my life- it’s- it’s so pointless. My mother- my father- my father- he drank- and my brother- he had all these- problems. And my friends, they all thought I was so cool and listened to my every word, and then they all left. I was so popular in junior high; why can’t I be popular now?”

Aren listened carefully, then he said, “Rhonda, you can’t be in junior high forever. Those popular people back in there- Tina Brown and her crowd- they aren’t worth it. They spend all their time on superficial stuff. You’re forty years old, Rhonda. I’m sorry that you had such a bad childhood, but you can put it behind you, can’t you?”

She’d never heard advice like that. It was always, “Shut up, you stupid girl,” from her parents and, “You’re so cool,” or, “You’re such a b****,” from her friends, and , “Your grades need improvement,” from her teachers and usually nothing from her boyfriends.

“I can’t make anything of myself now,” Rhonda said, staring at the sunset. “I wasted my twenties and most of my thirties on drugs, at parties, dating gang members, and even now- I’m just a secretary.” She hadn’t told Aren about the darker side of her past, but she figured honesty was the best policy. It wasn’t a policy she had ever used before, but she somehow felt comfortable using it with Aren.

Rhonda stared at Aren, then she kissed him lightly. For the first time in her life, Rhonda truly felt loved. It was a feeling she couldn’t get enough of, and she realized- happily- that she wasn’t worried about what Tina Brown would think of her when she returned to the party, or how her mascara was probably smeared now. Because nothing stupid like that mattered anymore. “Thank you, Aren. Thank you.” 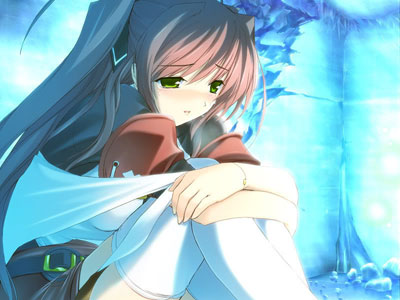 The author's comments:
This is NOT based on my life, though it's very loosely based on the life of someone I know. The idea for it basically grew from me wondering about what a popular girl's life would be like in twenty years and it evolved from there.
Post a comment
Submit your own

View profile
Brilliant, Esi. I like how the stories weave together. :)