I was with a man last night. He was driving way too fast, but I didn’t mind. It was late, and I felt a little tired, so I kept thumping my fingers on the dashboard, trying to stay awake. Warm air came in from the vents and swept through my fingers. My fingernails were painted silver, and it made me dizzy staring at them tap against the car.
I turned towards the window, trying to focus. There was a McDonald’s billboard to my right, and a bright light shined across it. A city stood beside the billboard, and its lights flashed onto the highway. One skyscraper illuminated a green light. For a while, I was lost in the colors. I wondered if I was in Arizona or Arkansas. I didn’t think either had buildings that looked like that. Maybe I was in Las Vegas. I looked around, and realized there weren’t enough lit up buildings for me to be in Vegas.
Staring at all the lights made my eyes hurt, so I turned away from the window and faced the man. I grabbed a drink from the cup holder and took a sip. He kept telling me to drink more, but whatever was in the cup I drank from burned my mouth. The man didn’t notice anything I was doing, and continued to stare at the yellow car in front of us. I looked at him, and how there was a freckle underneath his chin. It wasn’t until then that I realized his arm was in between my knees.
“Where are you taking me?” I asked, looking down at my legs. I couldn’t feel my body very well, and I wasn’t able to tell what he was doing.
He moved his arm and placed his hand on my mouth. It smelt like a cigarette. When he finally released me, I didn’t bother him anymore. I remained quiet, as he moved his arm in between my legs again.
I sighed, but the music was so loud; I couldn’t even hear me do it. Maybe it didn’t happen. If it wasn’t heard, it didn’t really matter, so in a way it didn’t happen. As he kept driving, I wondered what he may do once he was finished with me.
Probably go find another girl or smoke.
I imagined him standing on a street corner, and people passing by giving him little notice, considering him a normal person like I did. Maybe they’d give him a blithe smile, and if the smiles were from men, or an elderly woman, they would never think of him any more than a normal person.
They wouldn’t notice how he looked unsatisfied with his cigarette, as the smoke curled out and came back in, or how he cocked his head to the right when a lady walked by. Eventually it would get later and the people surrounding him would disappear and return home. It would only be him staring into the empty streets. When a thin brunette walked past him, he would grab her unwilling arm, as he sucked himself into another high. It would be just him and her, smelling the smoke fade out into the empty streets. Soon she too would fade out with the smoke and me. 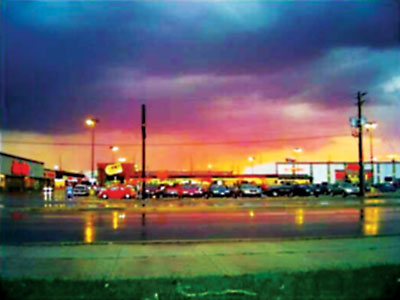