The beat of the music had my hips automatically swaying. Everyone was gathered at my house for my going away party. There were decorations everywhere. There was not one spot not covered by glitter, confetti, spaghetti string and/or streamer I, Autumn Kyra Falls, am going to college. Excited, is not the word to describe what I am feeling. I felt way more than that. I was anxious seeing as the only time I have been away from home was when I went on dates and when I went to sleepovers. Even then though, my mother wasn’t more than an hour away. (My parents split up after my tenth birthday.) Right then at that very moment, I realized how much I was going to miss my main support system. I was going to miss how much my mother would chastise me for being late for curfew and how I would yell at her for making me miss a day with friends to watch my little siblings. I think I am even going to miss the little critter.
My only comfort was the fact that I wasn’t going to be alone. My older brother, Nathaniel, was a sophomore there, which is one of the reasons I am allowed to go to across the country and my boyfriend, Matthew Houston, also got accepted and was going to be there with me. Matthew and I have been together for three years and over that period, we have fallen I love. He and I were both going to study performing arts. I was going to be a musician and him, a play writer. We planned to make it big and live the life of luxury and then settle down to marriage and kids. Our lives were planned out and we were in this for life.
I also felt remorse in choosing a school that was so far away from home. I felt selfish in leaving my mother to care for my younger siblings by herself since my “father” thought that he was too good for us. I have three younger siblings, all of whom were going through the awkward “I am a teenager” stage. Tracy and Alex are the girls who are starting to get into the “I actually care how I look” phase in life. They are fourteen and eleven. Alex’s twin brother Kevin is at a point in life where all does is play video games and cause mischief. I felt really bad.
Before I could sulk any further, I saw Matthew walking toward me. I smiled and moved over on the bench that I had moved to during my thoughts to give him room to sit next to me.
“Can you believe it babe?” He asked. I immediately knew what he was talking about.
“It is so strange knowing that I am an adult and that I am going off to live on my own.” I turned to him. “Did you ever just sit and think on it Matt? We really are headed out into the real world. In exactly three days we are on our own. It is really scary to think about, isn’t it?” I finish my little speech.
Matt was contemplating what I said. “You’re right. We are on our own but as you said before, we are adults and can handle it. To tell the truth, I am scared but as long as we’re together we’ll make it through all of this.”
I smiled at what he said. It was true in every aspect. We could handle this.
***

Three days later, I was saying goodbye to my family. Tracy was the first to come up to me.
“I’m going to miss you… a lot.” Tears were rolling down her beautiful latte colored face. “You have to come back soon and don’t forget to call. You can facebook me too, Mom said that I could get one since I am of age.” Tracy blubbered. I hugged her tightly. Tracy and I were best friends; I know that its kind of pathetic but it’s true. We did mostly everything together and the three and a half year age difference meant nothing to us.
“I’ll call three times a week and I’ll miss you too.” I let her go with one final hug.
“You have to Skype us at least once a week.” Those were the first words that left Alex’s mouth. I smiled. I was going to miss her bold and daring-ness.
“What she said.” Kevin agreed. “Oh and for my sake, do not join a sorority. They are for princesses who only care about their looks and you are way above that.” I smiled at Kevin. He was very opinionated but that was just him. I gave them each a hug and told them how much I loved them.
A car honk sounded outside. I knew that it was Matt and his dad who graciously volunteered to take us to the airport.
I walked toward my mom. The tears that I had been holding back were coming forward rapidly. I had prepared myself for this but that didn’t make it any easier.
“Mom.” I said before I broke down. My mother comforted me with her hugs and words of inspiration. Another epiphany hit me; I wasn’t going to be able to gain comfort from my other from across the country. “I’m going to miss you mommy. I know that it’s cliché to say but you are the best mother anyone could have had and I love you.”
The car honked again. “Sweetie, you have to go. Let me just say that I am proud of you and that I have faith in you. I know that you will succeed in everything. Autumn, just know that I am proud of you and that I will support you in whatever life chooses for you. I love you sweetheart.”
She pulled me into another long hug. In that I took in her scent never wanting to forget it. She smelled of cotton candy and cigarettes. Mom was the type to want to stay young forever she was the type of person that lived with what life gave her. I was going to miss her crazy and carefree antics.
I smiled at my family before taking my picking up my last suitcase and my carry-on. (My other things had been shipped to storage in California so that Matthew and I could move them into our apartment when we got there.) I waved at them before walking out the door and into the Matthew’s dad’s car.

This was the start of my new life; a life on my own; a life as an adult.
Chapter 1: That damn smiley face

I never thought that I would ever be in this situation but here I was sitting on the bathroom floor crying my eyes out because of a damn smiley face. I have only been in college for two months and have already royally screwed up. The tears kept coming like a dam had just broken and all the water was escaping. I looked toward the clock to see 2:54 pm staring at me and I knew that it was only minutes before I had to tell my boyfriend of my discovery. That scared the heck out of me.

I slowly made my way out of the bathroom and into our bedroom. I was still trying to wrap my head around the new discovery. I thought over my options in the mean time. There was a chance that the test was a false read but I knew that it wasn’t. I was late and I thought that it was because of stress. I wasn’t really paying attention as much as I should have been, I mean whose period is two months late. Then there was the vomiting and headaches but I had easily overruled them as the flu or common cold. I am so stupid, so blind.

My mind was going haywire, I didn’t know what to think or do. How would Matthew react? Mom? Everybody?

I heard the click as the door of the apartment opened and closed. I heard my name being called and looked back at the test with the little smiley face taunting me. I knew that I was going to tell Matthew and I knew that I didn’t want that evil pee stick to be in my hands when I told him so I quickly threw it under the bed.
“Sid? Sid?” Matthew continued to call. I slowly took a breath, mentally preparing a speech for myself.
“In here.” I called softly to him. I heard his footsteps as he made his way to the door. I took a last breath and looked up toward the door where he was standing a look of concern on his face.
“What’s wrong babe?” Matthew asked, worry coloring his tone. No matter how much I prepared myself for this I couldn’t make out the words to tell him. Matt and I have had a life plan since we were twelve. We had been friends since we were five and barely ever went anywhere without each other. Then around the time that we were twelve, hormones started to kick in and we agreed that once our parents allowed we would start dating. Our parents approved at we started dating three years later.

Matt and I have always been ones to plan so after high school we knew that we would go to a college with a great pre-law program and then we would go to Penn State and graduate from there when we were 25. Then we would take the bar examination. We would get good well paid jobs by the time we were 28 and then think about marriage and family. Everything was planned and this was not according to plan.
What’s wrong babe? Matthew’s questioned echoed in my head. I patted the place on the bed next to me and he silently sat down. We sat there quietly for a minute before I said. “In our ten year plan, the family portion is coming early.” There was no response from him. In my peripheral vision I saw him stiffen and saw the blank expression on his face. This went well….right? 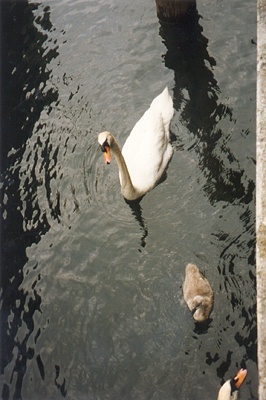 The author's comments:
I thought about what it had to feel like for my mother when she had me and the story took on a life of its own.
Post a comment
Submit your own