I remember that feeling of falling. Falling for an eternity. It was only a four foot drop, but by the time I’d reached the ground, it felt like hours of falling, falling, falling. By the time I hit the mulch, there were already tears in my eyes. A little boy, probably three years old, toddled toward me and leaned over, blocking out the sun. He was sucking his thumb, and to speak, he had to withdraw the thumb from his mouth. “Boo boo,” he said, but his voice turned up at the end as if it were a question. I nodded yes. “Boo boo,” he repeated, and this time, it was a firm statement. His silhouetted frame bobbed around me to my face. He squatted so his head was right over mine. I saw a strand of saliva, dangerously close to falling, dangling on his thumb, which was now hanging by his side. His thumb was shriveled and looked like a raisin with all the color sucked out. I remember thinking how it looked--like he’d been in the bathtub for over an hour. Then the saliva string slowly, slowly, slowly started to fall, and I rolled, like I’d seen the superheroes do on TV when I was watching the big kid shows.

The pain was too much. Instead of avoiding the toddler spit, I got a full splash of it, right between my eyes, and a searing, burning sensation in my right arm. I clutched it and clenched my teeth to keep from crying out in pain. I squeezed my eyes shut, to keep the tears in and the little kid’s drool out. Here I was, laying on the mulch beneath the monkey bars in a public park with a toddler half my age leaning over and drooling on me.

It was more than my six-year-old mind could bear.

Using my left arm to push myself up, I got to my feet. Brushing off my butt with my left hand, I stumbled around the playground equipment until I could see the bench where my mother sat, cooing over my baby brother, as usual. She didn’t even look up from the carriage until I was close enough for her to hear my sobs. I presented my “boo boo” to her, and she cooed over me for a change. She sat me on her lap, inspected it, and then made the mature decision to leave the park for the day. Later that night, when a mommy kiss didn’t do the trick, she knew something was wrong.

The next couple of days were a whirlwind of doctors and x-rays. Three days later, I had a sling around my neck and a cast on my arm. I didn’t even mind that I wouldn’t be able to go to the park for six to eight weeks. Every kid in my kindergarten class signed my orange cast, and my best friend, Angie, even gave me all her leftover Valentine’s Day candy. But it wasn’t their sympathy I wanted. Not the kids in my class or even my best friend.

No, I wanted my mother’s--not her sympathy as much as her attention. She’d barely noticed me since Brandon, the baby, had been born. So when I told the doctor that a little boy had pushed me off the monkey bars, I lied. I hadn’t been pushed. I just wanted to show my mother what I could do. So I tried. I showed her how I could climb to the top of the slide without using the ladder, but she was just watching Brandon sleep in his stroller. I was pretty sure that my interesting displays of dare devilish gymnastics and perfectly choreographed routines were more fun to watch than my brother sleep. So I decided to do the most difficult trick of all. I was going to do a flip off the monkey bars. And not the little kid monkey bars--no, I was going to do a flip off the big kid monkey bars. It was nearly unheard of for a six year old, or so I thought at the time. So I mounted the ladder and grabbed onto the first bar. I climbed out to about the middle bar, and I swung, back and forth, giving myself some momentum. Then, with a mighty twist of my wrists, I let go, ready to feel a rush of excitement as I spun through the air, head over heels, landing perfectly on my feet. But all I felt was the sensation of falling, for an eternity, until I was on the ground, looking up into the eyes of a drooling toddler, my mother’s attention still aimed on the baby.

Yes, I had a boo boo, and as long as I had that boo boo, I would have my mother’s love. But as soon as that cast came off, I would be forgotten again, having to resort to doing back flips off monkey bars and breaking arms. Well, it was a painful and difficult choice, but I would do anything to get my mother’s love. 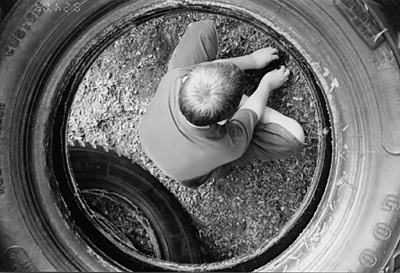 The author's comments:
This piece was inspired by a picture I saw of an unhappy child in front of a pair of monkey bars. I really enjoy picture prompts.
Post a comment
Submit your own