The Only Choice | Teen Ink

The harmony of colors twisted into Macie’s sight, as she lay in bed. Her eyes traced the ribbon she had painted onto the ceiling: a masterpiece of visual grace. She was supposed to be occupied with excitement of the upcoming winter break, but instead felt her mind being conquered by the conversation she and her father just had. It wasn’t as if it had completely shocked her, little pieces of the truth had squeezed and wedged into her observant mind, like the fact that she had never seen pictures of herself younger than one year.
Macie’s father, Mr. Volin, had given her almost everything she wanted, but she had thought it was because she never asked for much. Mr. Volin seemed to be so much more relaxed than her friends’ dads, but she remembered that she had a much, much better relationship with him than any of them. Looking back, Mr. Volin was always the perfect father, but maybe this was simply because he was trying so hard to be a real one. Macie sighed again and pulled her covers over her head, as if trying to block out everything that had happened that day. There was a soft tapping on the door. It seemed like a sad three knocks. The door creaked open, letting in grief and Mr. Volin.

“Hey… Can I come in?” he asked, stepping in before the question reached its end. Macie did not reply, but peeled the covers from her head and sat up.

“I still love you,” he whispered, gentle hands stroking Macie’s hair, “To me, you’re just as much daughter today than you’ve always been.” His voice as warm as the sun continued the conversation, “Do you want to meet him? Your… dad?”

Macie looked up into her father’s clear, gray eyes. Today was the first time she’d seen them hazy. She began to mumble, “You are my dad,” but couldn’t complete the sentence.

Mr. Volin made up his mind, “We’ll go tomorrow, then. I’m coming home around 8 o’clock. Be ready, kiddo.” He hesitated, brushed his lips on his daughter’s forehead, and walked out.
*

“Let’s go, Macie.” Her father playfully tugged at his daughter’s rich red curls. Macie felt the corners of her lip being tugged up by a paternal love. Together, they walked out of the car; hand in troubled hand, holding each other up.

Macie saw a tall yellow building, peeling from old age. Was this where he worked? She walked forward, heart pounding, and leaned on the rusty door. It creaked, revelaing a room with plastic chairs and tables. Mr. Volin tried to smile, and led her through a pair of double doors in the back of the room. She heard muffled voices from the other side. Mr. Volin opened the door for her, and Macie numbly walked through. As they entered, Macie saw a row of metal beds, about twenty. Some had occupants, and toward the back a man with dark red hair caught her eye. He looked tired and laid down to sleep, but briefly looking up he seemed to recognize Mr. Volin. His eyes twitched nervously from father to daughter, and his mouth faintly opened as chocolate brown eyes met an identical pair in the form of a thirteen-year-old girl. The latter pair widened in disbelief, and found her legs running, running, running, away from the shelter, and away from the truth.
*

Macie felt the cold air splash into her face as she breathed deeply into the crowded night. Her mind needed time to process this. Everything was happening too quickly—the conversation, meeting her…father…. All she wanted was to stay Macie Volin forever, and have her dad fix her breakfast tomorrow morning, just like every other Saturday, just like it should be. She felt Mr. Volin tug at her arms as he caught up with her.

“Macie…” he began, but the bustle of people pushed them into their car. Macie wanted, needed, to speak. She groped around the enclosed air for something to say.

“He’s homeless?” Voice tainted with tears, that’s all she could find to say.

“He’s not my dad!” Her voice cut across New York’s starlit streets, but echoed into the depths of her soul.

“Why not, Macie?” Mr. Volin seemed sad, but unrelenting.

“He’s… he’s…” she reached desperately for any excuse, “He doesn’t care! About life, or about me! He can’t buy me anything… And why else would he be an unemployed, lazy—“

“Macie.” Mr. Volin’s voice was stern, “He is trying his best. He has a job now, and the days he earns wages, he uses it come here to the shelter to sleep. He spends his weekend nights at Central Park.”
He cleared his throat and continued, “Macie, I’m disappointed in you. Why are you acting like this? I thought I raised you better than to judge like this.”
There was a silence thicker than the Antarctic ice, but it was melted by Macie’s tears. He had raised her better, but she wished he hadn’t. She wished she was selfish and shallow. She wished Mr. Volin was selfish and shallow, and didn’t have enough sacrificial love to show this…man to her. She would wish for anything…just that Mr. Volin would stay her dad.
An expression of sympathy flitted over Mr. Volin’s features, and he gave her a one-armed hug.
“C’mon,” he breathed, “Let’s go home for now.”
*

*
The next evening, Macie finished dinner and plopped down on the couch. She snuggled tighter into the blankets on the couch to keep herself warm. A pitiful whimpering entered her ear, and she turned around to see her puppy, Cinnamon, shivering in the doorway. Mr. Volin had just let the dog back in. Macie’s tenderly beckoned the puppy onto the couch and her lap. Her father had told her not to let Cinnamon on the couch, but Macie decided that he could live with some change.
Macie’s fingers then flicked on the television, and heard the weather man describe the low temperature for tonight. The man’s voice pierced Macie’s regular Saturday evening and reminded her of her reality. His voice repeated in her head, “Negative twelve degrees…” Caressing her puppy, she felt Cinnamon’s trembles gradually shifting to soft, warm comfort. Her puppy’s shivering placed a vivid image into Macie’s mind, and for a moment she saw a red-haired man with only a green overcoat to block out the sharp, icy winds.

Along with this, her mind replayed yesterday’s scene, and her father’s voice joined in harmony with the weather man’s, “He spends his weekend nights at Central Park…”
“No.” She said this word out loud, trying to make it louder, and continued fighting herself. “If I go, I won’t be Macie Volin anymore.” Even as she said this, she felt that technically, she never was.

She carried on petting Cinnamon absentmindedly as she further retraced her thoughts. Cinnamon licked her hand, just like always. Slowly, not knowing what was happening, Macie felt herself rise from the couch.

Distracted and led by only the one determination that the man would not sleep quivering tonight, Macie slowly pushed open the door of the master bedroom. Mr. Volin looked up, surprised. Macie called out in a hoarse whisper, “I need you to drive me. To Central Park.”
Mr. Volin obediently led his daughter to the car. Macie kept her gaze fixed on the road, seeing the road before her as both the path to the beginning, and to the end.

The pair reached Central Park, and Macie stumbled out of the car. Mr. Volin kept a protective grip around his daughter, as she locked her gaze on a particular man. She did not feel any uncertainty—his face was engraved in her heart. Macie, still held by Mr. Volin’s vice like grip, began to walk toward the man. All the winds of New York that night seemed to push her against what she was about to do. No, they seemed to whistle in accordance with her thoughts, is this really your decision?

Macie whipped around and looked Mr. Volin straight in the eye. She saw in him the knowledge that with this verdict, she was going to lose so much; so much would change. Her hair blew all around her and she felt the strands striking her cheeks. A series of jokes and camping trips streaked across her thoughts, and she found herself choking out a different sentence, “Dad, take me home, please.”

Mr. Volin’s expression was again that of the deepest compassion. He seemed to want to say something, but decided against it and nodded. Slowly, the two of them began to walk back toward their car. Each step away from the man was filled with troubled emotions. Macie remembered Cinnamon’s eager look as the puppy jumped onto the couch, and a certain quote from her thoughts waved across her mind. Her father could live with some change. He could live with change… so why couldn’t she? I thought I raised you better than this, her father had said. Macie froze once more. He had raised her better, no matter what she wished, and he had raised her. Things would change, but he will have always raised her better.
Facing her father, she said to him, “You did raise me better than this…dad.”
Macie immediately found herself sprinting back across the park to a faded wooden bench with a sleeping man huddled on it. She felt distracted, and confused, but in the middle of it all she needed something firm. Her father had raised her to be kind, and accepting. Even if everything changed, he had raised her better.
As Macie approached the man, his whole being seemed to contrast his environment: he had hair and eyes that did not belong in the streets. Macie took a deep breath, and couldn’t think of anything to say. The man on the bench looked up, and his lips formed the words he had been dreaming for the last thirteen years. “Macie.”
When the voice of a father, which had a blunt air like that of the finest of knives unused for a decade, twisted its way through many obstacles and entered the ear of the daughter, Macie realized that ever since she cuddled Cinnamon into her lap and felt the shuddering of his skin, or even since the conversation, really, she had only ever had one choice: forward.
She was numb, but managed to pull her hand out of the brilliant blue sweater that contrasted flamboyantly with her hair. Placing a crumpled ten dollar bill into her father’s blistered hand, she whispered into a frostbitten ear, “Sleep well.” 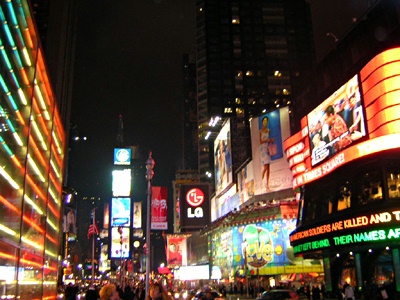 The author's comments:
Like Macie, many, including myself, shrink back in the face of change. I tried to blatantly refuse it. But while I was refusing, change was already happening. I decided it was better to accept the inevitable with open arms, which really ultimately is the only choice.
Post a comment
Submit your own