Pottu, bottu, tikli, teep, chandhalo, tikka, gopi dots, and nade. All those names represent forehead decorations that have graced the cities in Southern Asia. But it is not just a cosmetic mark to improve a person’s physical appearance, or a way you imitate a celebrity, or even something you do out of obligation to your culture.
My name is Maya Watson and I’m a Bindi girl. No, I am not some weird Indian superhero. I am a girl with blond hair, blue eyes, and a red bindi on my forehead. I know for most of you what you are already thinking. You may ask why would someone who seems so American wear something so foreign? Or you may joke that I’m wearing a bindi because I married out of wedlock, (which of course, is only an urban legend.) But once you get to know me a little better you’ll understand.
There is a quote by John Stuart Mill that goes,
“Every great movement must experience three stages: ridicule, discussion, and adoption.” I have been ridiculed for many things, from not knowing where I came from to why my biological parents gave me up; I have been discussed by adoption agencies as to what should be done with me with finally being adopted by the people with whom I come to know as mom and dad.
To those who don’t know the situation, my mom, known as Tilo Das, just Tilo to friends and family, was a citizen of Calcutta, India until the day when she came to the U.S. to receive a medical degree and fall in love with my father, Mike Watson. A while after they got married they discovered that my mother couldn’t be a mother biologically, so they decided to adopt.
They were tested and scanned to see whether they were fit to become adoptive parents. Then they child proofed their home so that when their baby comes it will be safe for him or her. They filled out paperwork after paperwork until their fingers were stained with ink. They met with corresponding birth mothers, until they found one that considered giving her child to them, but then she decided to keep the baby. Finally, the adoption agency showed them a few profiles of children that were a few years older than a baby, my profile was among them.
I remember when I was seven years old and was beginning to worry about whether or not I would get adopted. I had seen kids who were turning into teenagers at the foster home I was staying at. Just before I met my future parents I was laying on a bed holding my toy cow, Bessie, thinking about what would happen to me. I was interrupted from my thoughts when I heard someone knock on the door. I sat up straight and wrapped my arms around my legs clutching Bessie to my chest as my future parents walked in with my foster guardian.
At first I was so open mouthed that Mary Poppins would have said,
“Close your mouth, please Maya. We are not a codfish.”
The man was practically normal with kind green eyes and an English tweed coat, expect for the woman standing beside him. She had warm caramel skin, kind brown eyes, and a spot of red on her forehead. She was so beautiful, she looked an exotic princess.
But soon I got suspicious. What if these people wanted to become my foster parents? What if they left me like all the others did, even my own mom and dad did? Or worse, what if they wanted nothing to do with me whatsoever?
They walked across the short length of room from the door to my bed and then followed the longest period of silence I’d ever known. If my life was a game at that moment than all the players would have been considering their next step.
“Say ‘hello’, Maya,” my foster guardian said breaking the solid silence.

I looked at the couple for a nanosecond before looking down and mumbled my hello.

She continued saying that the Watsons wanted to act as my part time guardians so that they could spend some time with me. She explained that they wanted to do this so that we could all get to know each better and see whether or not our relationship could turn into an adoption.

Naturally I didn’t know what to say to this and as I was thinking about what to do next when the lovely woman with the mark on her forehead sat down next to me. She smiled beautifully at me, and that was when I realized we were both hoping for the same thing here, a family. I

From that day forward we did nearly everything together. We went to fairs and ate so much cotton candy that we got sick. We went to the bay and feed stale cereal to the lovely white swans swimming by. On rainy days we went outside and stomped on the puddles not caring how wet we got. One time I remember crying in a bed at the Watsons’ house, this was one of the times when I was allowed to come over here, and Tilo and Mike were there to tell me I was safe and Tilo sung me to sleep with an Indian lullaby.
As each passing day went by I lost my suspicion about the Watsons and began to think of them in my head as mom and dad. I had finally begun to relax and be an actual kid. Usually when you’re in a foster there a lot of kids that need to be taken care of and that makes you age faster than you would want to. But I made jokes and laughed because there was someone there to laugh with me. I fell down and cried and had someone to help me up and put a band aid on my knee. I got to be the self I never was before because I had someone special there to help me become that person.

A year after the adoption on my eighth birthday my new family toasted my birth and said that one of the first signs that they were sure that they would adopt me was Bessie because cows were considered sacred in India. Everyone who joined in the celebration of my birth laughed, expect me. I merely smiled and thought how lucky I was to celebrate my first birthday with a real family.

To this day I still have Bessie and wear bindi marks like the one my mom wear on that eventful day long ago. I picked up an English accent from my dad and the Hindi culture from my mom. I love the Bollywood actress, Aishwarya Rai, and Hollywood’s Julia Roberts, both who coincidentally both wear bindis. I get annoying comments now and then from people who are culturally ignorant or just rude about the adoption. But I just say to those people that I’m not just American, or a practicing Hindi, or even just an adoptee. I am merely Maya Watson, Bindi Girl. 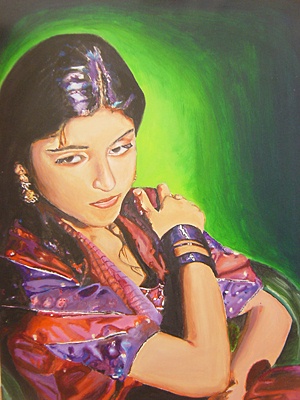 The author's comments:
"I got to be the self I never was before because I had someone special there to help me become that person."
Post a comment
Submit your own