Cold wind slashed at their cheeks, stuffing their ears and noses with frost and cramping hands and toes with freeze.

“Garth, can we please get a move on?” Jenna pleaded with her son, clutching grocery bags in bare, dry hands. Her dark hair was pulled into a loose practical bun, her eyes were tired, and her knees and back ached from kneeling and praying for so long the night before.

But the boy in the puffy blue winter coat was entranced. Despite the chill, an old man sat slumped over an old guitar on the curb, legs crossed and elbows creaking with age. As the small boy watched, a string twanged unpleasantly on the fretboard, but the man continued staring across the street at an empty shop.

“What are ya looking at mister?” Garth asked, ignoring his mother. Jenna huffed in irritation, breath puffing out before her, and continued moving bags from the cart to the trunk of the car she had taken out of desperation just a few year ago.

Garth toddled awkwardly over to plop down next to the man. Their twin breaths ghosted in front of them before being whipped away in a flurry of shivering air.

“You are entirely too trusting, boy,” the old man muttered, still plucking aimlessly at the guitar. Garth turned his dark eyes on him. “Why?”

“Because you ain’t old enough to remember The Quarantine, that’s why.”

The boy pushed his chest out importantly. “No, my mommy told me about daddy, and that he had to leave then. He wasn’t allowed to stay even though I was really tiny.” The old man chuckled darkly. “But my mommy loves me! And we pray for daddy’s soul a lot.” Garth added quickly, glancing over to his mother who was still placing bags carefully in the trunk.

“So your pa was infected? Sorry kid.” He sounded genuinely sad. Garth just nodded. Jenna finished rustling through the bags, double checking she had everything. The street was quiet except for an old melody on the guitar. It recalled a porch and a peaceful orange sunrise and an embrace in warm summer air before anyone had even heard of anything terrifying as Virus 651.

Then the quiet broke as the trunk shut with a snap, and Jenna walked to where the old man and the boy sat, huddled to themselves against the cold.

“Garth?” She looked down at the pair before sighing and sitting slowly with her hands propped behind her, as a mother who is hesitant and resigned to the whims of her child will do. Sher sat close to Garth on his other side, shielding him from the frigid wind.

The old man stopped playing his guitar. The town was usually quiet. The past few years had dwindled the population to about 600 people.

“My daughter used to run that store,” he stated solemnly, pointing a shaking wrinkled finger to the abandoned shop. Standing empty, the flat-roofed building stared back at the three with cracked glass windows and chipped paint spelling out

“When was she taken?” Jenna asked quietly.

“Anne was one of the first. When they were still calling those buildings ‘treatment centers’.” He snorted derisively, his mouth in a sad line on his crinkled face. “She attacked Evie, our old dog. Our neighbor found Evie’s… her pieces… on the front lawn. She was… very sick, very fast.”

Jenna put her arm around her small son. the wind whizzed past and silently strummed the strings of the guitar, and stirred the bare branches of black trees into scratching the grey sky. It twirled into the broken glass windows of Anne’s abandoned shop and shuffled papers and filled the absences with cold. The old man shifted to let his legs splay out into the empty street, and a heavily clunky old locket thunked against the worn wood of the guitar. Tarnished and silver and incredibly old, it filled him with an echo of memories every day.

It seemed that all the quarantined town had anymore was quiet. When it was not quiet, whispered histories and shared memories perforated the utter emptiness and disturbed old bloodstains and ash and unknowable terror and swelling limbs and hairless carcasses and confusion and garbled science over radio transmissions and the day the fence went up and the day the fire was seen and the day they tried to escape and the day everyone seemed to deflate and die inside all at once, until it seemed horribly real again. And then the blanket or coldly quiet acceptance settled and it was only a waking nightmare again, behind the barbed wire fencing in Abbretville’s tired pain.

“And what about yours?”

“It happened in the night.” Jenna pulled up the sleeve of her coat with some difficulty, goosebumps peppering her dark, scarred forearm. Blunt shapes of toothmarks were gouged in.

“We noticed his swelling feet and hands but ignored it. Stupidly. We prayed for a cure.”

The old man chuckled and Jenna glared over Garth’s head at him.

“Where’s your god now, huh? Burned with the rest of them,” he stated dismissively.

Jenna hugged her son tighter. “Who are you to judge?” she whispered vehemently. “I would not be alive were I Godless.” She had heard enough over the years. Her religious fervor had been one of the few to survive the Virus.

Garth leaned against her, having fallen asleep to the accustomed quiet of the street. He had grown up knowing nothing else but the quiet.

The old man held up his hand in apology. The silver locket clunked against the wood again. “Sorry, not my place. Sorry.”

The three sat in silence. Then Jenna picked up her son, careful to not wake him, cradling his bum so his head could flop over her shoulder. She held her free hand out and the old man took it. “I’m Jenna and this is Garth.”

“Bill.” She nodded in recognition, smiling wanly. She Walked to the car.

“We’ll be seeing you sometime, Bill.”

“You sound awfully sure of yourself.”

Jenna strapped Garth into his car-seat and turned back around. “I just have a feeling.”

She walked back to Bill, and dropped a pair of navy blue gloves next to him on the cracked sidewalk.

The car door slammed, and Jenna drove off, car puttering down the street.

It was silent again.

Bill grasped at the silver locket hanging against his thin chest, felt echoes of pain and fire and helplessness between his wrinkled fingers. He thoght about overprotective mothers, and began plucking at the guitar, playing to the absences of Abbretville.

The gloves sat abandoned on the sidewalk. He had stopped caring about the cold long ago. 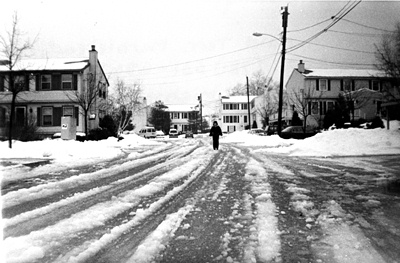 The author's comments:
Sort of a post-apocalyptic piece set in a small town somewhere in mid-America. I dunno where it's going but I'll probably write more. This just has a ton of oblique implications about what has happened to these people.
Post a comment
Submit your own

Favorite Quote:
Always bring a banana to a party.

View profile
This is amazing! I love that it gives just enough to let you know what happened without telling everything!!
a.singlenote SILVER said...
on Jul. 17 2012 at 2:55 pm
a.singlenote SILVER, Little, Colorado
6 articles 0 photos 33 comments

View profile
Oh my gosh thank you so much!! It means a lot that you could connect with my characters :) Thank you for reviewing! <3
augustsun02 SILVER said...
on Jul. 17 2012 at 9:03 am
augustsun02 SILVER, Hamburg, New Jersey
9 articles 0 photos 76 comments

Favorite Quote:
Write. It doesn't matter if you're overjoyed, furious, miserable, or what. Write to keep those emotions in check while managing to grow stronger.

View profile
Okay, so, um, wow. You did a great job. The old man actually reminds me of my friend's dad. He'll walk around the neighborhood playing his guitar. Anyway, I thought this was very well written. Great job :)