Favorite Quote:
I myself am entirely made of flaws, stitched together with good intentions.

The little girl sways back and forth in a hand woven rocking chair. The floors creak beneath her weight, even though she’s light as a feather. The room’s walls are deep blue, like ocean water or her brother’s eyes. They’re much prettier than her bubble-gum colored walls. She likes to think that maybe one day when she inevitably gets super powers, she’ll be able to dive into the walls to go swimming. She’ll say hello to all the dolphins and fish, maybe even give a quick wave to the mermaids floating in the salty water. She’ll be free.

Her brother’s room is a safe haven. He’s never inside anymore, but the memories of him will never leave. The Teddy bear with small, soft, brown curls still sits on his nightstand. Toy soldiers line the shelf of baseball trophies above his bed. She always thought the sport was boring, but whenever he stepped up to the pitchers mound her heartbeat always fluttered and quickened in her chest.

The girl hops off the chair and creeps over to the tall armoire in the corner of the room. She opens the doors, stands on her tiptoes and tugs one of the baggy T-Shirts off of a hanger. It reaches her knees when she pulls it over her head, but it doesn’t matter. She feels safe. She feels like her big, strong, brother is with her.

She shuffles downstairs towards the kitchen. Her small, six-year-old feet do not make a sound against the cold steps.

There are pancakes cooking on the stove. She smells them from the other side of the house. A plate slides in front of her when she sits down at the table. It’s full of the steamy, buttery, breakfast. Picking up her fork, knife, and drowning them in syrup, she digs in.

She looks up at her mother. Her face is wrinkled from stress, but underneath the lines in her skin there is an expression of content and hope. The hair on her head is grey at the roots, but a soft brown color everywhere else. She thinks her mother dyes it to try to keep from aging, but she can’t stop time. That’s proven by the wrinkles in her skin that grow deeper and deeper, and the roots getting more and more grey which each passing week.

“Have you heard anything from Cameron yet?” The child inquires, voice full of innocence. The mother pulls out a chair for herself, heaving an exhausted sigh as she sits down, another sign of age. She wipes her batter-covered hands on a dishtowel and shakes her head.

“Nothing yet, honey, but I’m sure that something’s going to come in the mail any day now.”

The mother wipes a nervous bead of sweat from her head. “Well maybe it’s just taking a while for his letter to get from Afghanistan all the way to over here.”

The tiny girl shrugs unenthusiastically and stands up from her spot at the round table. “Maybe.” She whispers. “I can hear the bus outside, time for school.” She says, rolling her eyes. Apparently school starts to suck around first grade. She gives her mother a kiss on the cheek and scurries out the door like a small mouse. A SpongeBob Square Pants backpack hangs from her shoulders. Her ponytail bounces up and down with every step.


“Are you sure you want to wear that shirt to school?” Her mother yells before her daughter reaches the end of the driveway. She’s still in her older brother’s T-Shirt. The little girl nods her head enthusiastically and hops onto the bus, leaving for school.
The mother walks briskly through the house, up the stairs, and into her son’s room. She looks at the toy soldiers above his bed and thinks of how they represent her boy. He‘s only a toy in the gigantic, gruesome game of war. She grabs a pillow from the bed and gives it a squeeze. It still smells like him, just a little bit. She wonders how long the smell will last before it’s rendered to being a regular pillow again. A single tear leaves her eye and slides down her cheek as she opens the sock drawer near his bed and rummages through for a neatly folded piece of paper.

“Dear Mrs. Curtis, We regret to inform you that your son, General Cameron Michael Curtis, was shot by an Afghani soldier…”


Not able to read any more of the letter she crumples it and stuffs in the bottom of the sock drawer once again. As the tears flow steadily down her face she takes another glance at the pillow and realizes it doesn’t matter that the smell will fade someday. It’s always going to be his, which is all that really matters.

“Hard to believe it’s been a month already.” She mumbles quietly to herself. She stands up, walks over to Cameron’s writing desk, and sits down in the small, stiff, chair. The smell of last week’s ink is still prominent in the air. She picks up a blue pen and a piece of lined paper.

“Dear Baby Sister, …” She starts, just like he always did and she continues to do. She writes of valiant tales and heroic acts, stories of his soldier friends and attacks on enemy forces. She never fails to include, “How’s Mom doing?” just to make it seem like “he” cares that much more. Six tears fall onto the paper. She curses at herself. Now she’ll have to wait for it to dry before dropping it into the mailbox. Now her daughter will have to wait that much longer for an already-late letter from her fallen brother.

“I’ll tell her someday.” She convinces herself.

And she continues to write. 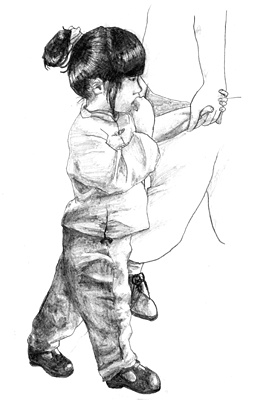 The author's comments:
Honestly, an idea just popped into my head and I started writing. I wanted to mix the idea of innocence and maturity, and this is what happened. I kind of like it.
Post a comment
Submit your own

Favorite Quote:
I myself am entirely made of flaws, stitched together with good intentions.

View profile
Thank you so much! That really does mean a lot :)
BridgetB BRONZE said...
on Oct. 14 2012 at 9:28 pm
BridgetB BRONZE, Moreland Hills, Ohio
1 article 0 photos 4 comments
View profile
This is an incredible story! It's so sad, but really touching. The ending is such an unexpected twist.