Favorite Quote:
"We especially need imagination in science. It is not all mathematics, nor all logic, but is somewhat beauty and poetry"- Maria Mitchell

“Don’t touch that!” Samantha shouted in a wavering, frantic tone, as she dashed towards the small, wooden box. Her breathing came in short wisps as she shoed the hand away from the item and picked it up, holding it against her chest in defense.
“Your ad said everything had to go, did it not?” The customer grunted in frustration with a raise eyebrow, his eyes scanning her as though she was mad.

“Yes, but not…not that.” Samantha sighed, looking down at her feet in embarrassment. Her cheeks flushed a deep rose.
She carefully placed the wooden box back upon the vanity and brushed off dust that had settled onto the top. 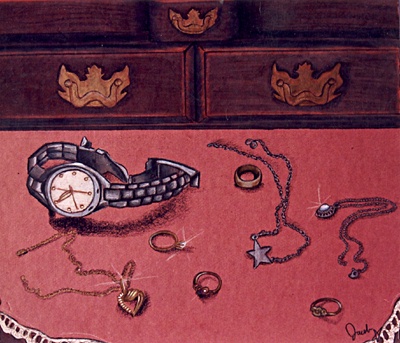 The author's comments:
A piece in which a sister learns the meaning of family
Post a comment
Submit your own