I had the perfect chance. He was bending over and admiring the specimen and he wouldn’t have expected it. He was a horrible husband; he deserved to rot in hell. I gave him everything. I gave up my life for him. We were supposed to be the “loving” couple. I still remember the glow on his face as he said, “I do.” He wanted nothing but to marry me and at that time I wanted the same as well. We were so in love it was shocking. We were never meant to be though. That I knew. I should have listened to my father. It was the right thing to do. But I was blinded. Blinded with love. I thought I knew what I was getting into. The first few years were amazing! We had lots of vacations and we saw the world. He made me feel like I was the only girl in the world.

Now? Now he made me feel like dirt. He no longer called me “sweetheart”; he no longer kissed me before going to bed. He no longer woke me up with beautiful texts. He didn’t even come home sometimes, even though he said he did. He was a changed man. He didn’t love me anymore. He wanted to get rid of me. I have the right mind to just push him off the cliff. After all, who would suspect the “scaredy cat Molly” to murder her beloved husband? No one would suspect me. I could just say that he met with an accident while we were camping out. Yeah. That would be a smart idea.

I stared at his back. He was 45 but still very muscular. Right foot…Left foot…Right…Left…Right…Left. I moved closer to him. I bent down and pretended that I was interested in what he was looking at. My right hand on his shoulder and my left on his back. I closed my eyes and with all my might…

A scream. I didn’t bother to even look if he fell. I turned away and walked towards the camping site we had built. I could hear him struggle to climb back up. Damn. I didn’t push strong enough. I felt good though. It was like I was a free woman. He should be scared of me now. He should be terrified. No. Maybe he died. I couldn’t hear anything apart from the birds chirping and the leaves rustling in the wind. The woods were really a peaceful place to think about anything and everything. I didn’t feel threatened nor scared. I felt like I was in power. I felt like I was on top of the world.

He was behind me. I knew it, felt it. I just waited. He moved cautiously. Every time he took a step he would breathe in deeply. As if that was his last breath. He was standing right behind me now. His hand resting lightly on my right shoulder. “It was that, wasn’t it, Molly? You didn’t push me, Molly. It was an accident…Yes, how could I doubt you?” A hand, sweaty and shaking met my left shoulder. He flinched as I made eye contact with him. The extreme of horror fixed on his baby-face. A splash of blood covered half of his forehead. Drips of blood ran down his sunny yellow shirt. He had taken quite a beating, unfortunately this didn’t stop him. Not one bit. His empty, emerald, eyes stared back at me.

I didn’t know what to say. I tried to kill this man. What was I supposed to say? Sweat crawling down his unshaved face he whispered, “Remember Dr. Maria? Remember her Molly? She was a nice lady, helped us both with the loss of little Charlie” he cringed at the mention of Charlie, our son. “Remember? Maybe she can help us again. Yes…in fact I’ll make an appointment and we’ll go see her together. Right after we get out of this place. Okay?”

I moaned from the tapping sun-light against my face, wondered how long I had been asleep. There was a small window, which granted me a glimpse of freedom. I looked at the woman; her caramel brown eyes gazed into mine. “Good Morning Molly, my name is Maria. Have you got any idea where you are right now?” she questioned. Terrified for my life, I stayed silent. “Right well, I don’t think you do. Don’t worry Molly; you’re safe here no one wants to hurt you...The forest rangers picked you and your husband up after finding you along a danger zone. They brought you straight to us because they found out about our relationship in the past with…your son. This may not be the right time but I feel that you have the right to know.” She paused and took a deep breath.

“You’re husband died.” What? This was… “He didn’t make it. The police will be here to investigate the incident. They…they…how do I put this? They feel that you murdered your husband. The last words that your husband muttered were ‘She pushed me’. He was delirious but the rangers had enough evidence to not rule out murder.” Me? Murder? “I’m sorry but right now we have to focus on your health.”

But…but…he was alive. He talked to me about coming here. He told me…Was it my imagination? Did he really die…because of my push? That can’t be. He…he was covered in blood…but not enough to kill him. Oh God…what happened? Why couldn’t I remember? Was it really me? Did I really kill my husband? Did he stage it? Stage it so that I was guilty of his murder? He was capable of suicide…he was always weak like that. He knew I would never commit suicide; never even think about it. He probably knew he couldn’t make it…yes…then he staged his death and made sure his last words haunted me and made my life miserable. Well…I won’t let him have the satisfaction…will I?

She placed a tray of food in front of me “Eat up” she exclaimed then turned to leave. I looked at the tray of food on my bedside table. Eat up? How? After finding out that my husband was killed and the police will be here because they thought I had killed him? I couldn’t believe that the police thought that I had murdered my own husband. I mean I know I had a motive and I actually did push him down…but I changed my mind. The consequences were too much to handle. I just wanted to scare him.

The blood red scarf hung on the handle of the door. Was that the only way out? Was there no other option? I couldn’t stand myself if I have to stay another minute in this wretched place and if I get out it’s going to be hell with the police. He really planned this through even though he was badly beaten. The scarf glowed bright red and it felt warm in my hands. I thought about all that I had witness. All that I had to go through. I couldn’t believe that my life was in my hands. This was what it felt like…to be weak. It overwhelmed me. I had the decision.

I knew what I needed to do.

She has a history of being depressed in the past. Signs of depression, such as not eating and insomnia, were shown but were not fatal enough. Doctors have predicted that it was due to the stress of the murder of her husband that led her to her death.
Around 27th May Mrs. Hamilton was put to death by suspension by the neck. The red scarf tightened the trachea by using the weight of her body. She had a good record of her days in this institute (even during the past); nevertheless the nurses could have overlooked the fact that she felt isolated and sad. 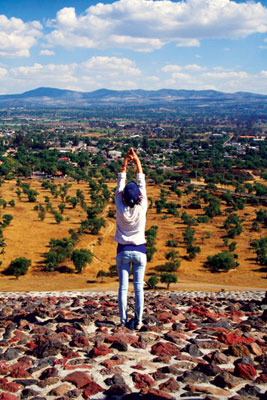 The author's comments:
I hope you enjoy this piece. I was encouraged to do this piece of writing for a project at school. Leave a comment or two xD
Post a comment
Submit your own