My mind is so loud sometimes I forget I'm in a silent room. There's a conversation that keeps replaying in my head, filling up that void of vacuum air.
"You should go to sleep."
"I can't."
"Why not?
"He's in my head again."
"Think about something else. Something that’ll take your mind off of things, like a really good dream you want to have again."
"He's all of my good dreams, you moron."

My family wouldn't like him. My dad would tell him to pull up his pants while glaring at him. My mother would think he is too quiet. But I like his pants and I like his demeanor but what I love is what truly is his, and that's his laugh, which sounds like a song to me and no matter how cool he tries to be his laugh will be there, his dorky and lovable laugh.

She and I are driving to school and she's about to explode with excitement and on the inside I'm dying a slow and painful death. “I always knew you liked him! I always knew!” And I would cringe. But I’m also smiling a little because she’s now evidence that whatever I was thinking wasn’t just a figment of my imagination.

I told him that the next time he would see me I would be tomato red and he laughed and said he liked tomatoes and usually I hate tomatoes but in that moment all I craved for was a tomato. He told me to have fun in the Bahamas and I told him to not have too much fun without me and he smiled and the next day I left with his smile in my head.

I'm flying above the island and all I can see is blue and green and the only thing I can think is I wish you were here.

I'm tomato red and swollen like I promised when I come back. He asks me if I've ever heard of this thing called sunscreen and I say no and then we laugh. I tell him I went parasailing and flew above nothing but blue and green and he tells me that sounds amazing. But he's scared of heights.

We make films. I write. He directs. We work well together. He tells me he's never worked with someone like me. He says I'm the best. I say thanks. I want to tell him he's the best too but things don't quite work like that.

Sometimes he gives me this look. It's impossible to explain but it's this look that makes me fall in love with his seven thousand times over. His eyes are so amazing, they're hazel. I never loved hazel eyes so much. He looks at me with those eyes and gives me that look and brags about my writing. He thinks I'm a good screenwriter. I think he's a good director but what am I supposed to say? She tells me that he's going to prom with this girl. Her name is Brittany, but it's spelled weird-different than that. I hate it. She tells me she's sorry. She doesn't need to be. He's a senior anyways. I always knew it wouldn't work. I wish I could believe that. 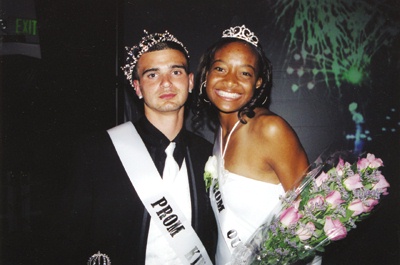