A Victim of Life | Teen Ink

A Victim of Life

She was not pretty. Not conventionally pretty, not unconventionally pretty. No romantic soul ever looked at her and saw a butterfly on the verge of being born and that’s alright. People always think someone has to find at least one beautiful thing about everyone else, but that’s just not reality. She was an okay person; she had never hurt anyone but she never saved anyone either. She had some good friends and did decently in school. No one ever bullied her and her parents were both alive and loving. There’s really not much to be said about this girl, in truth, but there is one thing we can learn from her: someone people just snap sometimes.

It was a quiet evening in mid-September, the kind where the dim rays from the sunset leak in through the cracks in your old wooden fence and paint orange lines on the slowly withering grass. It was still humid, but a lonely gust of cool wind lolloped through the heavy air every once in a while, making people lust after autumn. Had there been anyone walking down the aged sidewalks, cracked and bleached white in some areas from sunny summer afternoons, they would have felt a touch of nostalgia.

She was sitting in her room and the smell of roasting chicken and fresh rolls was wafting up the stairs. Across the hall she heard her younger brother talking on the phone with his friend, laughing loudly at something that had been said. Her window was cracked and she could faintly make out the sound of the kitchen door opening and her lively dog running across the back deck, still young enough to find excitement in a simple trip outdoors. Normally these sounds would have calmed her, made her feel at home. Tonight they grated against her nerves.
She drummed her pencil against the textbook open on her desk: Chemistry, page 414, the effect of pressure on the solubility of a gas. Science had always been her best subject but now nearly every time she sat down to do her homework she started crying with frustration. Why didn’t things just make sense to her like they used to? Her brother’s laugh echoed around her room again and she suddenly stood up and slammed her textbook shut in a flare of incredible irritation. Recently everything bothered her, from the way people fawned over her charming best friend to the way her mother called her down to dinner. She wanted to punch something, someone.

Deciding she should probably just take a break for a bit, she dragged herself over to her bed and collapsed in it. Her bed was soft and warm and had always been a simple kind of escape for her. But now the pillow was all wrong, the pillow she had used for several years. When she lay down, she could feel the inside of her throat. It made her uneasy so she turned to her side. The way the air coming out of her nose bounced off the blankets and faintly hit her cheek tried her patience, so she sat up. Suddenly her mother’s loud, nasally voice cut through the silence: “Time for dinner!” She clenched her jaw in annoyance so great she might have lashed out at someone had there been anyone else in the room.

Although what she really wanted was to be alone, she went downstairs and silently prepared a plate for herself. She told herself that if she just ate quickly and quietly, she’d be back upstairs, alone, in no time at all. She could handle ten minutes around her family, easy. She’d always been reserved so no one expected her to be charming or interesting anyway.

Once her brother and mother had both seated themselves (her father was working late, as he did once a month or so), they began speaking. Her mother asked how their days had been; her brother replied happily, his voice cracking with every other word. It stretched her nerves tight and she clenched the knife her in her right hand tightly as she cut through her chicken. “And what about you, sweetheart?” her mother asked her affectionately, genuine interest in her dull brown eyes. She shrugged. It had been as good or as bad as any other day of her life. As good or bad as every single day she had lived, monotonous hours passing monotonous hours. The thought promptly gave her a headache. She put her fork down and closed her eyes tightly.

The dog started barking intently, wanting back inside after traipsing through the yard for a little under a quarter of an hour. It had had enough adventure for one day and was ready to return to its safe, warm home. She rose obediently to let the pet inside and her mother smiled proudly at her attentive, mature daughter. How well the girl had been raised! All the mothers in the neighborhood were jealous that they didn’t have such a responsible child, one who never went out after her curfew or drank alcohol at parties on weekends or stay out late with boys on summer nights. What a sweet, studious, gentle young lady, never giving her parents any worries.

She saw the satisfied smile on her mother’s face as she walked to the back door. What once would have made her proud instead made her sick to her stomach. She imagined lunging across the table at her mother, knocking the plate of lovingly made rolls onto the floor and smacking that mindless grin right off the older woman’s face. Her brother would mean to try to stop her, but he was so soft-hearted that he would probably just start crying instead. The thought of that added to her disgust; what a pathetic group of human beings.

As she reached for the door to let the dog in, she realized she still had her knife clenched tightly in her hand. It was dull but still sharp enough to cut through meat. Or flesh. She lifted it up to take a better look and saw her face reflected in the metal, warped but still clearly her. She had her mother’s eyes, a lackluster shade of mud. Her skin was pasty even under the fluorescent lights overhead. She hated looking at herself in the mirror, how unremarkable she was.

One hand still wrapped around the knob, she looked through the glass door and locked eyes with the dog. She had never really felt much affection for the creature; she didn’t understand the dog’s constant need for companionship. It had one dark eye and one blue eye, both glazed with a look of stupid contentment. It made her feel ill with revulsion. Behind her, her brother and mother conversed pleasantly. Her brother suddenly laughed his loud, maddening cackle. She was abruptly so infuriated that she couldn’t think straight.

She threw let out a scream that would have startled a deaf man and sent her foot right through the glass in the door, the dog yelping and jumping aside in fright. Her mother gasped, “Are you okay, sweetheart? What happened?!” and her shocked brother immediately started sobbing. The sounds of their voices, loud and grating and oh so obnoxious broke something within her. She didn’t feel sorry that she may have hurt their damned mutt. She didn’t feel guilty for ruining their door or upsetting her younger sibling or worrying her mother. She just felt done. Exhausted and sick. Sick of being alive.

She turned, locked eyes with her mother. Lifted the knife in the air, her palms sweaty and her blood sprinting through her veins. No one said anything as she thrust the blade roughly into her throat, sawed the weapon back and forth for a moment, and collapsed onto the tidy linoleum floor, a victim of her own negligible existence. 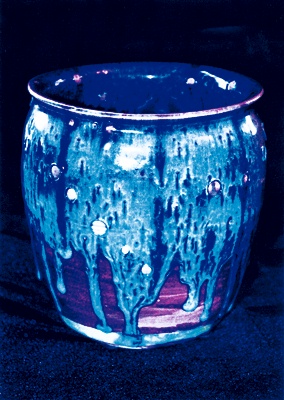 The author's comments:
This is the first piece of fiction I've written in ages and ages. Possibly the least inspirational thing you'll read today.

If you feel sad or hopeless, tell someone. If no one will listen, I will. Your existence is not negligible; you will be happy again. I promise.
Post a comment
Submit your own