I was brand-new when she came for the first time. Shiny, golden, a jaunty tune spilling out of the speakers hidden in my mirrored ceiling.

I remembered her because she was so terrified of me. My flashing lights and loud music were all too much for a child of two, especially coupled with the horses that were too big for her to ride on and the children aged five and six who took the little carriage seat before she could. Her mother held her hand as she rode on the horse, a bright yellow dress around her knees, whimpering the whole way around. One revolution, two, three — and she was off.

I was still brand-new when she came back. It had only been a week of me being open, but already, the older children were tired of me. I knew they’d be back in time, but for now, they needed a break. This time, there was no loud crowd of pushing, shoving, squealing children. Just me. She rode in the carriage. When she left, she told me bye-bye, and I played my music just a bit happier.

I was less brand-new the 300th time she returned to ride on me. Yes, I counted every single visit. She was big enough to fit on the horses now, and her favorite was a bright yellow one with a golden saddle. It suited her. I’d never seen another child that was quite so bubbly. I’d watched her wardrobe shift over the years from brightly colored dresses to gym shorts and brightly colored shirts. Her Saturday visits were the best part of my week. Unlike all the children, I am not free to go anywhere. The only breaks in my mundane existence are the riders. She was my favorite. I’d have told her that if I could. I’d have told her that when she blew me a kiss as she left each day, my heart swelled to bursting. Or, it would have, if I had a heart.

My speakers failed the day she told me she would never come back. She popped her pink bubble gum, tossed her freshly-cut hair, and whispered to me as if it was strange to be talking to a carousel. Thirteen years old and she’d already moved away from childhood. I could still see the baby curve of her jaw and her mismatched yellow and pink socks, but she’d decided to ignore them. I wanted to argue, beg, plead my case. Being more grown-up didn’t mean forgoing carousels. Stay. Keep coming back. I wasn’t ready for her to be gone, and I was trapped. I had no voice with which to call her back. I had no feet with which to follow her. She was my everything, and I had no way to ask her to stay.

Three years had passed when she came back to me. I saw her from time to time during those devastating years, walking in the park. Sometimes she watched me from a distance. Sometimes she passed by without a glance. If I’d had a heart, it would have shattered into as many pieces as the mirror that fell from my ceiling last year during a thunderstorm.

The night that she came back, I’d been turned off for the evening. The moon was nearly full and glowed in the sky. I almost didn’t recognize her. Not a speck of yellow could be seen about her. Her ragged, black denim pants and black hoodie made her look dangerous. I could feel the pound of her combat boots on the ground as she leapt over the fence around my floor. She remarked that the moonlight that looked so beautiful shimmering on the duck pond made my horses look creepy. Her companion laughed, a deep, throaty sound. I shivered, and my wood creaked. Then, she did something I would never have thought her capable of. She mocked me. She called me old, run-down, a wreck — only useful for the view. Then, she left black lipstick smeared over her companion’s mouth, the coins from her pocket slipping out and sliding through the cracks in my floor. It felt wrong to me. She shouldn't be kissing someone else. I missed the kisses she’d blown at me. This was the first of several nighttime visits, each one ending in black lipstick under the watchful eye of my gilt-covered horses.

One night, she was alone, not with her companion. I was relieved until I felt the warm wet of her tears dripping onto my floor. Aghast, I watched her sob, wishing I could comfort her, knowing that she felt the pain I’d felt every day without her. It’s the pain of being without the one you love.

She came to say goodbye when she left for college. I wasn’t expecting her to, but she did. She was still wearing ripped black pants, but her shirt was pretty and flowy, white with little yellow flowers. Black lipstick was replaced with red. She looked too grown-up. Call me overprotective, call me old-fashioned, but I didn’t want her to look like that. I saw the looks she got as she walked in the park and almost wished she’d return to the oversized black hoodie and go-away lipstick. She watched the children ride around and around, laughing and giggling as the horses went up and down. I played my music a tiny bit louder, just for her. Then, she blew me a covert kiss and walked away.

She visited once during college, passing by through the snow-covered park on her winter break. The park was empty, and she gave me a tentative wave. No words were said, no kisses sent, but I was glad to see her. I was glad to know she was doing all right.

It was a spring day, and the daffodils were in bloom, but her dress wasn’t yellow to match. It was pure white, falling to the grass with a large skirt about her. The flowered arch by the side of the pond was close enough for me to see and hear every word. They kissed and walked down the aisle in between the chairs, applause on every side. As she walked down the path by me, I realized what the violinist was playing. It was the "Carousel March." I watched with pride as she threw her bouquet of daffodils to the waiting crowd and took the arm of her new husband to help her climb into the limo. As they drove away, she smiled at me through the rolled-down window, and I thanked her over and over again for letting me be a part of her special day. For letting me be a part of her life. Still, as the limo’s exhaust spiraled into the air, I couldn’t help but wish that the girl I’d grown up with had made a different choice.

She was in a yellow dress. Her little boy was in blue, running around in circles on the grass. Too small to fit on the horses, he sat in the carriage seat. I gave them as smooth a ride as I could. The girl hadn’t ridden on me since that awful day when she was 13. I watched her smile at her son and laugh when he laughed. She was with me, and she was happy. I hadn’t felt this way since she’d ridden with me last. I knew, as they left, that she’d come back, every Saturday.

Her coat is yellow. Though it’s early fall, she’s always wrapped up in a winter parka. Being old makes it so much easier to get cold. I can feel it in my timbers. Apparently, humans feel the same way. Though my paint is peeling, and my mirrors are scratched, and my speakers are staticky, she brings her grandchildren here every time they visit. Even the 10-year-olds that grumble about being too old for carousels end up riding. When they’re not in town, she comes anyway, bringing a book every day to read on the bench by me. When no one is around, she whispers things to me. She blows me a kiss every time she leaves, no matter who’s watching. The grandchildren have learned to do the same.

She’s my girl now, and no one else’s. Her husband passed away two years ago. I’ve finally realized what I should have all those years ago. I’m in love with her. I always have been. We’re almost the same age, and we’ve grown up together. She’s loved me better than anyone I’ve ever known. My creators, my operators, my caretakers — none of them have loved me as much as she has. I know it’ll never be. I’m just a carousel. Wood and paint and mechanics. She’s a living, breathing, human being. I’m just glad that she still loves me. We age at the same rate — a new wrinkle on her face, a new creak in my wood. Even though I’m dying, I’m not sad. Life wouldn’t be worth living without her. I’m in love. I’m in love! And nothing, not even old age or cold days, can separate us now. 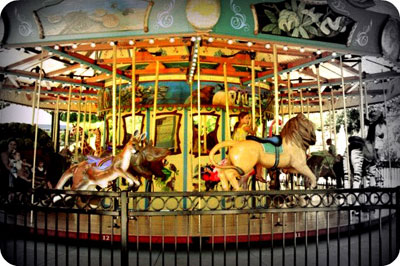