He Said, She Said | Teen Ink

He Said, She Said 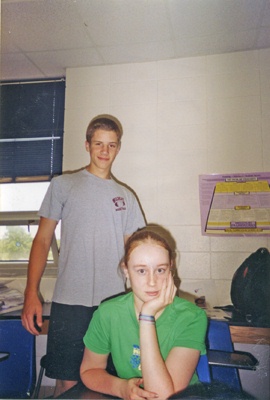 Favorite Quote:
"When life hands you lemons, make apple juice. Then sit back and watch the world wonder how you did it." -Unknown
"The world is my pineapple. I just have to figure out a way past the prickly parts." -Me

Favorite Quote:
In three words I can sum up everything I've learned about life: it goes on.
-Robert Frost

i loved the bit at the end:

View profile
This was amazing!  Beautiful and captivating.  I couldn't look away from the computer.  Very well done.  I hope to one day write as well as you do.
ClockworkLightbulb SILVER said...
on Mar. 13 2010 at 3:59 pm
ClockworkLightbulb SILVER, Nottingham, Other
8 articles 5 photos 36 comments
View profile
This is really good, I like all of your work.(:
KoolChik SILVER said...
on Oct. 1 2009 at 11:23 pm
KoolChik SILVER, St.Louis, Missouri
9 articles 0 photos 14 comments

Favorite Quote:
Love is patient, love is kind. It does not envy, it does not boast, it is not proud. It is not rude, it is not self-seeking, it is not easily angered, it keeps no record of wrongs. Love does not delight in evil but rejoices with the truth. It always protects, always trusts, always hopes, always perseveres. Love never fails. . .And now these three remain: faith, hope and love. But the greatest of these is love. - excerpts from 1 Corinthians 13:4-13

View profile
The word choice is amazing and the sentence fluency in great, all in all the story was wonderful and it had a great meaning to it.
Zero_K DIAMOND said...
on Aug. 18 2009 at 7:24 pm
Zero_K DIAMOND, Moosic, Pennsylvania
83 articles 0 photos 435 comments

View profile
I am blown away. This is absolutely beautiful.