The king of Lamoria | Teen Ink

She had to stop and rest for a while. But as she stopped she found herself falling through a hole. She asked herself, how did I not see this? But she didn't have an explanation. She was sure that she watched the ground as she walked. She had stopped falling. She looked around and saw nothing but dirt. There were torches everywhere, which lit the entire place. She thought to herself someone must be down here. Torches don't light themselves. A big, tall man with strong muscles snuck up behind her and knocked her out with a gun. She woke up and saw eight strong men all around the room. She also saw seven teenage girls. Some looked as young as thirteen. Others looked as old as sixteen. Her and the other girls were all tied to a chair. She asked, "Where am I"? One of the men answered, "You're three feet underground." "I don't understand how I got here." "I didn't see a hole when I was walking." The dark haired man who knocked her out answered, "That's because we hid it with a blanket,leaves,and lots of dirt." "What are you going to do with all of us?" The girl who was sitting by her answered, "They're going to sell as sex slaves." Tara replied, "If you men don't release me King Peter is going to come rescue me and kill all who is responsible for my kidnapping." They just started laughing. The same man answered, "We've been doing this for years and we've never been arrested or killed." "Now all of you better go to sleep and stop talking!" "If I hear a word from any of you I'll start killing all of you one by one." All the men laid down and went to sleep. Tara tried to go to sleep, but she couldn't until very late because she had never been this scared in her entire life.

One of the men woke her up and said, "Get up we're going to leave." He untied her from the chair and tied her hands again after she got up. "You better not say anything or I'll have to shoot you." So she remained quiet. All of them were each holding a gun and the hands of every girl. They brought them to a dock where a huge ship was waiting for them. There was at least a hundred men and fifty girls aboard the ship. He locked Tara in one of the rooms. It was very small and the only thing it had in it was a bed. There wasn't even a window. She just sat there all day and wondered what was going to happen to her. Ten hours later, she went to sleep and tried to dream of somewhere she could go where no one could find her.

The same man grabbed her and took her of the ship. She didn't know where she was for she had never been here before. There were no trees all the land was flat. Yet it felt chilly, she didn't understand why because where she lived it was always warm. The sun wasn't out only the clouds were. The man holing her hands said, "Welcome to castlevania." He took her to a saloon. She hated saloons with all the drinking and woman stripping. She wanted to run as far as she could. But she couldn't because the man behind her was holding a gun. After they went in she saw a tall, lean man with brown eyes. He said,” Here’s the money now give me the girl." The man who was holding her threw her at him and walked out. " I just spent half of my salary on you and I'm going to make sure you do your job." She replied.” I just want to go home." "Well I'm going to make sure that doesn’t happen." "I bought you and I own you." "I have a contract here that says you're stuck with me for two years." "Lizzie, I want you to show this girl how to do her job." Tara studied Lizzie; She had her under garments on and wore red lipstick. "Come on I'll show you to your room." It was a small bedroom with a bed, a dresser, and a nightstand. "Tonight you're going to start working." "All you have to do is go around and serve drinks." "And if a man wants something else, you have to give it to him." "I'm going to have to undress you from all of those petticoats you're wearing." "I'm surprised you're still breathing." "Now doesn’t that feel so much better." Tara didn't answer; She looked down and started to cry. "Please don't start crying on me miss." "In time you'll start to love your job." "I'm a princess I don't want to work here." "If you really are a princess then how could you have gotten sold?" "I was running away from someone." "I guess I tripped and feel down a hole and got sent here." "Whom were you running away from?" "It doesn’t matter now." "I'll probably never see him again." "You need some makeup on." "Sit down and let me put some on you.” You look perfect now I think you're ready to start your job." Tara looked in the mirror, she didn't think so she always hated having makeup on.

Lizzie opened the door and said, "Those are the men you're going to be serving." Tara didn't like the idea of serving men who drank alcohol. "Here's your tray and drinks." "Now go out there and do exactly what I told you to do." She slowly walked out and started to serve one of the men. "Hey honey I think I'll have you after I'm done this drink." She wanted to punch him in the face so badly. But she knew she couldn't do that. So she kept on serving the other men. "Hey honey I'm finished with my drink now how about me and you go in to one of the rooms and have a bit of fun." He grabbed her and took her to one of the bedrooms. He forced her to lay on the bed as forced himself upon her. She grabbed her knife that she hid under her garments. And stabbed his leg with it. He got up and said, “I’m never coming here again.” Then he walked out the door and left. The owner of the saloon came in and said,”Tomarrow night you better do your job right.” “Remember I own you for two years.” She stayed on the bed and cried herself to sleep. Now she was wishing that she had never ran away. 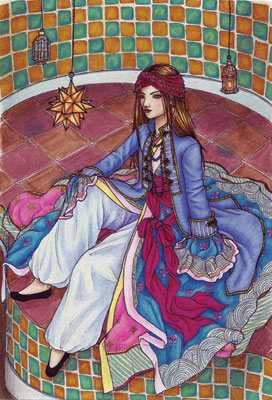