Loving you is like wanting death Ep. 4 | Teen Ink

His point of view.
Silly girl. I walked back into the parking lot and found my red and black motorcycle sitting there between a huge a**ed blue Van and an even huger a**ed woman stepping out of her yellow bug on the other side. I shook my head as I let the woman go first. As soon as my butt hit the seat my cellphone rang with my least favorite ringtone which indicated a d**che was calling me. There are three people in my phone I've programmed to have this very unique ringtone: my Dad, my Uncle, and my brother. I'm beginning to think this whole being a d**che thing is genetic. I pulled it out of my pocket and saw the name D**che number 3 flashing at me. My brother. My finger was about to press end. But then I remebered last time when I ignored his call. He called me 87 times afterwards and left 56 messages. Maybe just this once, I'll just answer it.
"What?" I put my helmet on as I steadied the phone between my ear and my shoulder.
"Look at the library's entrance way." I could feel him smiling as he spoke. I looked around and stared at the entrance way.
"Nothings there." I retorted in a very annoyed tone.
"Keep looking." I sighed as he continued to smile through his words. I stared back at the entrance way. The girl with the ocean in her hair walked out with a bag in her hand. I felt my mouth curve into a smile. She bought the book I gave her. "Did you get her number?" My brother's cheerful tone was his way in making fun of me for my lack of a girlfriend while he and my other elder brother has many. "Your so foolish baby brother, your letting another one slip you by, but ofcourse she probably would have cheated on you with me. Like the others." He was definitly smiling. Which pisses me off even more.
"You can not fathom the immensity of the f**k I do not give." I hung up the phone. And began watching her walk to the sidewalk. She didnt seem like the other girls Ive dated before. None of them had blue hair. If I went the other route to exit the parking lot, I could pass by her and ask her if she needs a ride. My plan was fool proof. And the way she was drooling over me earlier, she couldnt possibly say no. I felt a smile stretch my face as I began my bike and drove in her direction. She was sitting down at the bus stop and skimming at the book I gave her. Suddenly, a car jumped in front of me. It was a black 2010 Mercedes Benz with the liscence plate WIT3TI63R. D**che Number 3. I face palmed myself and shook my head. I should have known he was here. The douche wasnt psychic. There was no way he could have known about her unless he was there himself. My phone began to ring. I watched the car come to a complete hault. We were just 10 feet away from her. I picked up the phone.
"Move." I said sternly.
He laughed before saying."Father, wants us. Your going to have to take your snack out to eat, later."
"Fu-" The line went dead. Motherfucker. I closed my helmets tinted shield in the front to hide my face as my brother pulled out the parking lot and I followed. I had her scent. Thanks to my little bump into me thing. So I wouldnt lose her. Id just have to keep coming to the library. My cell rang again as I slowed down at the stop light.
"What??!"
"I'll race you home." My brother hung up the phone knowing Id agree anyway. I smiled. I went on the stop light and turned into the fields. My own personal shortcut. D**che number 3 could say what he wanted about my lack of female contact. But he couldnt say s**t about me beating him at a race. 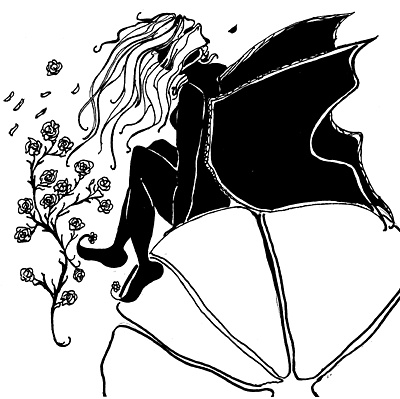 The author's comments:
OmG! Here comes Number 4!. Okay well this is in the guys point of view now. So please dont get confused. This was my plan from the beginning to do both point of views because I get so bored with just the one. I think both are necessary. IMPORTANT: I am back :) and the notebook with the whole story Loing you is like wanting death I had. Is gone! My mom threw it away on accident. So Im rewriting it as I go along. Bare with me people. Also If oyur wondering where is number 2??? of the series its called:Damn, Shifters episode 2. So go check that out then read number which is called Loving you is like wanting death lol and yeah. Im changing the name back to the original sorry for the slip up. I just wasnt feeling Damn, shifters as much as the original title. Pleasssee enjoy xD and thank you for the support.. xD
Post a comment
Submit your own

View profile
I'm sorry, but the cussing killed it for me, but keep writing. it's really good
junesunshine said...
on Feb. 6 2012 at 8:53 pm
That was really good! I'm so excited for the rest! Don't worry about the cussing I didn't mind it. It actually adds egde to the story and helps you understand what they are thinking! I loved it! More please!!
Iggy_Fang112 BRONZE said...
on Jan. 27 2012 at 8:51 pm
Iggy_Fang112 BRONZE, Daytona Beach, Florida
2 articles 0 photos 20 comments

Favorite Quote:
Right now I'm having amnesia and deja vu at the same time. I think I've forgotten this before.

Pain is inevitable; Suffering is optional

Favorite Quote:
"To be happy, Don't do whatever you like, Like whatever you do" -James Barrie (author of Peter Pan)

View profile
I agree with ChocoMint. Too much cussing. and especially when you have to keep writing them with the stars it just gets kind of annoying.
ChocoMint SILVER said...
on Nov. 10 2011 at 5:01 pm
ChocoMint SILVER, Bloomington, Indiana
7 articles 0 photos 129 comments

Favorite Quote:
"Love is like swallowing hot chocolate before it has cooled off. It takes you by surprise at first, but keeps you warm for a long time." - Anonymous

"Love starts with a smile, grows with a kiss and ends with a tear." - Anonymous

View profile
The cussing ruined it for me.  <><
Imperfectlife SILVER said...
on Oct. 19 2011 at 7:03 pm
Imperfectlife SILVER, Rochester, New York
7 articles 0 photos 74 comments
View profile
The boy is well... okay cute, plus the story was really good, but ... I think you need to edit it some things.
singinginthegardn GOLD said...
on Sep. 5 2011 at 5:07 pm
singinginthegardn GOLD, Cowell, Massachusetts
16 articles 2 photos 158 comments

Favorite Quote:
Right now I'm having amnesia and deja vu at the same time. I think I've forgotten this before.

Pain is inevitable; Suffering is optional

View profile
His French tutor needs to be fired. Very good. PLEASE write more. I am in awe at these episodes. Btw. thanks for writing the other three.
LovelySerena said...
on Jul. 23 2011 at 10:13 am
LovelySerena, Dededo, Other
0 articles 8 photos 27 comments

Favorite Quote:
Hope is the thing with feathers that perches on the soul. ~Emily Dickinson

Favorite Quote:
"No parent should have to bury their own child." -Theodin

View profile
too many swears in it i couldnt really understand it. I dont like it
ClaraRose SILVER said...
on Apr. 8 2011 at 1:15 pm
ClaraRose SILVER, Glasgow, Other
7 articles 0 photos 108 comments

Favorite Quote:
"The goal isn't to live forever, but create something that will."
"If you wanna go, baby let's go; if you wanna rock, I'm ready to roll.''
"No one ever said it'd be easy. They just said it'd be worth it." <3

Favorite Quote:
(couldn't think of anything better at the time) "Take the first step in faith. You don't have to see the whole staircase, just take the first step."-Dr.Martin Luther King Jr.

View profile
good job! i'm kinda getting into them now:) could you please check out some of my work?
Robsessed PLATINUM said...
on Nov. 1 2010 at 10:42 pm
Robsessed PLATINUM, McKinney, Texas
23 articles 1 photo 199 comments

Favorite Quote:
"I may be changed by what happens to me, but I refuse to be reduced by it." - Maya Angelou

"Did you know 'I told you so' has a brother, Jacob?" she asked cutting me off. "His name is 'Shut the hell up.'" - Bella Swan, Breaking Dawn

Favorite Quote:
\"When we\'re taught to love everyone, to love our enemies, What value does that place on love?\" Marilyn Manson

Really gripping although(lol)a lot of cursing. Keep it up!

And, again, don't mean to be annoying, will you read my works and comment?  They only got published recently.