My heels crunched the brittle autumn leaves scattered on the sidewalk, as I anxiously walked towards the church with a feeling of emptiness overtaking my delicate body. I took a deep breathe and tucked a piece of my light wavy hair and turned the corner to face the intricately designed southern church. I was one of the last to arrive but it was intentional, due to possible encounters with Macy’s family, or even worse, Jack’s. I examined the church, taking in it’s surroundings, unconsciously imagining what I would change if it were Jack and I’s wedding. Peyton, it’s over, I thought to myself. I quietly slipped into the last pew on the left hand side, careful not to make a scene. The church was where Jack and I planned our wedding because our families had been members since we were born. Peyton stop thinking about him, you’re over him, I scolded myself in my head, as I looked at Jack, fixing his tie nervously and moving his head around, as if he was looking for something or someone. As much as I tried not to, I couldn’t stop looking at his beautiful face, dark eyes, and heart-stopping smile. His head turned in my direction and our eyes connected, making time slow down. It brought me back to all the happiness and love we shared, holding hands wherever we went, cuddling while watching hockey or football. His smile broke my memories as his hypnotizing smile forced me to half smile back at him, trying to hide the pain. The music broke our eye contact, signaling the ceremony was starting.

The pews creaked from the movement of everyone turning around to face the ring bearer, flower girls, and bridesmaids. One by one, as the walked down the aisle, more and more pain filled my body and heart. The traditional music began, the doors reopened and the bride, arm in arm with her father, began slowly walking, evoking gasps from the congregation. I bit my lip, holding back the rivers of tears desperately wanting to overflow. I had to admit, Macy looked beautiful in her white a-line gown with subtle sparkle and embellishment. A typical southern bride, but taken to the next level.

Macy reached the end of the aisle and her father unveiled her face and led her to Jack. They held hands across from each other and the judge began speaking. I fiddled with my fingers, forcing myself to sit through the torture. Jack seemed nervous but I dismissed the thought and figured it was just wedding jitters. They said their vows and I did everything in my power to not listen but I couldn’t help but hear a lines words from Jacks. Our love for sports, country music, food, and traveling, are just a few of our commonalities. But no matter what we do, whether it be something we both hate or love, as long as we do it together, I’m happy. I couldn’t hold back my tears any longer, and as they spilled, I bolted out of the church and into the fall weather with my ruby red heels in hand, so I could run as fast as I could, to wherever my feet led me. 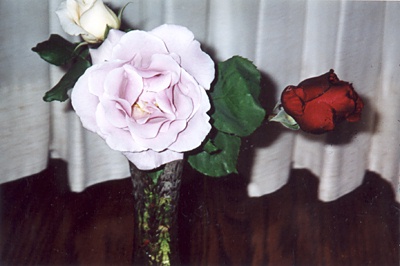 The author's comments:
It's loosely based off a Taylor Swift's song: Speak Now. It was really fun to write and I'm going to continue it :) feedback is wanted/needed!! I have thick skin so make your advice honest:)
Post a comment
Submit your own

View profile
Flattering myself is something i never do. You don't know me, but if you did, you would find out that i'm not so kind to that face in the mirror. And I thought that you stole my idea because 1) mine was in the forums, so you could have seen it there, and 2) i submitted my story before you submitted yours. I guess i was wrong. Maybe our minds connected and we thought of the same idea....though that's pretty odd.
dwadebabee3 BRONZE said...
on Feb. 8 2012 at 7:20 pm
dwadebabee3 BRONZE, East Greenwich, Rhode Island
3 articles 0 photos 4 comments

View profile
It's a simple idea, anyone can come up with it, and we both did, so I didn't steal it. It was my favorite song at the time so I decided to write a story based off of it... ps. next time, why don't you use proper grammar!
dwadebabee3 BRONZE said...
on Feb. 8 2012 at 7:19 pm
dwadebabee3 BRONZE, East Greenwich, Rhode Island
3 articles 0 photos 4 comments

View profile
I read your story and it's really good. But mine and yours are completely different. Yes, they may have the same inspiration, but they're not the same story. So, I didn't steal your idea, thank you very much. I don't read people's stuff on here, I just post my own occasionally. So please don't flatter yourself in this case cause I didn't steal this idea
marissadele PLATINUM said...
on Feb. 8 2012 at 7:00 pm
marissadele PLATINUM, Danbury, Connecticut
20 articles 3 photos 388 comments

View profile
I meant that you stole my idea of turning her song into a story. And I don't think so. I haven't seen anyone turn a song into a story on here, especially not "Speak Now". But I don't think I'm that special either, so, congratz, I agree with you. :)
dwadebabee3 BRONZE said...
on Feb. 8 2012 at 5:44 pm
dwadebabee3 BRONZE, East Greenwich, Rhode Island
3 articles 0 photos 4 comments

View profile
thank you! the ending isn't my favorite part either :/ but thank you for your feedback, it means a lot :)
dwadebabee3 BRONZE said...
on Feb. 8 2012 at 5:43 pm
dwadebabee3 BRONZE, East Greenwich, Rhode Island
3 articles 0 photos 4 comments

View profile
technically it was Taylor Swift's idea, hun. I'm sure thousands of people made a story out of it so you're not that special. I wrote it as an essay for class, so I didn't even look on Teen Ink...but I'm sure yours is good, too!!!!
marissadele PLATINUM said...
on Feb. 8 2012 at 4:56 pm
marissadele PLATINUM, Danbury, Connecticut
20 articles 3 photos 388 comments

View profile
Excuse me, but could you please check out my story, "Speak Now"? It was submitted before yours, and was in the forums for feedback. I think you took my idea.
AndSoItGoes01 SILVER said...
on Feb. 7 2012 at 8:25 pm
AndSoItGoes01 SILVER, Reno, Nevada
9 articles 0 photos 147 comments

View profile
I really liked it! Your description of the wedding dress and how your main character felt ( interesting name by the way) was amazing!!!! The way you ended it could've been better but that's just my opinion , still good job! Keep writing and I can't wait to read the rest and see how it all goes! :)