Start At The Beginning Please

Favorite Quote:
We write to taste life twice, in the moment and in retrospect.

The wind was blowing the leaves clear off the trees and the bitter cold was seeping into the coziness of the houses in the picturesque scene of northwest Ohio. The streets were empty and the welcome mats of all houses remained quite vague. The ground was blanketed with the crunchy red, yellow, and orange leaves that had drifted to the ground ever so gently one by one. The air had carried a feeling of mutual stillness to all the creatures that inhabited the area. The skies were cloudy and stained with grey. Soon coming was winter, when the streets would be almost more desolate than in fall. This was the morning of a beautiful wedding,though no one had bothered to rise yet. Five in the morning was just too early to get up for a ceremony at noon. Even though the clouds harassed the skies, the sun still smiled back at all the guests as they woke and crawled out of bed. Suddenly people started exiting their homes to grab the paper and start off the day. Everyone was in the process of pulling out their most opulent outfits for the wedding, fashioning their hair in the most attractive way, and smiling at themselves in their mirrors. For today, a future would begin. At the brides house was a flurry of mixed emotions, doubt, and nervousness as she shuffled around the house completing all the important tasks that should be done. She left the house around 8:45 a.m. to arrive at the hairdressers at 9:00a.m.. Once there she was to be pampered and spoiled until she was beginning to relax. Her hair would be pulled back perfectly into a formal up-do as was the common thing for brides to do. Every strand would be neatly put in its place and pinned down. Her makeup would be the envy of all women in the vicinity of the wedding and probably all women in general. Her eyes would sparkle more than diamonds in the morning sun as she walked down the aisle that day. The crowd would be left breathless as they saw the first glint of the silver heels peeking out of the bottom of her extravagant gown. They would stare and gape at the beauty that took small graceful steps that would make their way closer to the alter. The composed face with shining eyes that gave away all the mixed emotion underneath would be the main focus of everyone in the room. They would see the uncertainty passing through her that reflected every feeling up until she got to the the alter where they would show love. However, when the bride makes her entrance the groom would be the epitome of affection. His mouth would widen into a smile and his teeth would show white against his pink lips. The lips that would kiss the bride. The pastor would arrive at the church and bind them together. After this they would both gain a nagging feeling of togetherness. They would start a life together and watch the ebony clock chime in the hour. They would worry together and laugh together. They would settle down somewhere and create a family of their own. It would be them against the world. Things would settle to the same stillness of the morning previous to the wedding and everything would go back to normal. However there would be just one more house on the block. 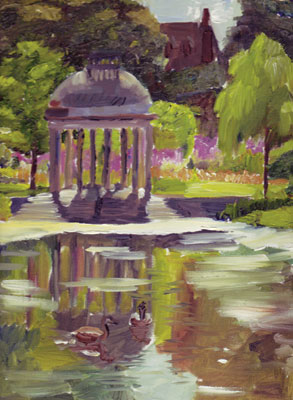 The author's comments:
I think this could be my best one.
Post a comment
Submit your own

Favorite Quote:
We write to taste life twice, in the moment and in retrospect.

View profile
Wow! Very descriptive. I felt like I was actually there. I especially liked the part of the married couple. maybe you could rate and comment my work?