Favorite Quote:
To be nobody but yourself in a world that is trying it's hardest every night and day to change you into everyone else is to fight the hardest battle a human being can fight, and never stop fighting.

Once upon a time there were two massive celestial bodies that commanded the sky. But then one, who called herself Moon, became sick. She faded from her bright fiery orange to a paler, grey shine. Her partner, Sun, began to outshine her until humans down on the earth no longer saw her, and this made her terribly sad. And as she grew sadder, her glow faded even more until she no longer gave off any light at all. Sun saw his beautiful wife’s sorrow and decided to sacrifice his glorious light for half of each day, giving her his energy and power and fading into the background of the sky so he was not seen by anyone. And so it came about that for half of each day, Sun disappeared and the day was over. But Moon never got over her illness and instead of fully absorbing her husband’s energy, she reflected a paler, silvery version that barely illuminated the sky. As her time in the eyes of humans was so different to Sun’s, the people began to name this Night.

A deal such as this has a cost, and the cost of Sun’s sacrifice was that he would never again shine alongside his fair wife in the sky. They were destined to follow each other in an endless circle, chasing one another but never meeting. However, the gods took pity upon these two lovers and decreed that once in a lifetime they may join together as they once did. And the sky would darken to remember Sun and Moon’s loss before erupting into a bursting white light. The people on earth observed this with bowed heads, and named this rare occasion an Eclipse. 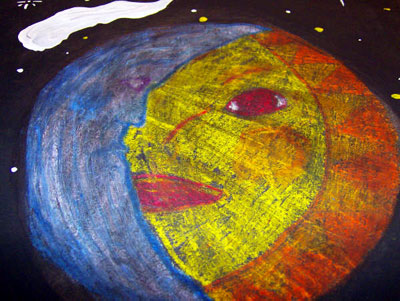