Savita stared down at the city, she had always hated it, she preferred her life on the farm where there were open fields and a beautiful night sky to sleep under. She felt free out here, she felt alive. Soon, she snapped out of day-dreaming and headed for the barn she had hunted in for the first two years of her adulthood but something was off, she smelt an unfamiliar scent. Cautiously she stepped into the barn alert for any signs of danger but she didn’t seem to notice the cat standing behind her.

“Hi! Who are you?” the strange cat asked.

Savita leaped in the air and whipped around to see another cat. He had fur like fire and bright yellow eyes to match.

“Oh, sorry, I didn’t mean to startle you it’s just I’ve never seen you before and I was just  curious, I’m Jinx. What’s your name?” Jinx explained and asked.

“It’s good to meet you Savita, such a pretty name, so how about we get to know each other,” Jinx suggested.

“Sure but no funny business,” Savita warned.

“Me, I’m just here for a friendly chat. Let’s get something to eat first,” Jinx told her.

They separated and went hunting for mice. Savita finally spotted one and scored her first catch of the day and returned to the meeting spot to find Jinx had been waiting there with three mice in his mouth.

“How did you…” Savita said surprised.

“Easy, just swipe and go,” JInx said simply and laughed, setting his down.

They began to eat, Jinx even gave Savita one of his and they talked for a while, soon the two were laughing and talking as if they were friends forever but the sun was beginning to set alerting Savita it was time to get some rest.

“Well, this was probably the first time I’d ever said this but, I’m glad I ran into some strange cat but unfortunately I have to head back,” Savita told Jinx.

“Me too. See you tomorrow,” Jinx asked and Sivita nodded.

Savita made her way back to the spot looking over the city, she only slept here so she could view the sky better. She padded the grass down and laid down, closing her eyes allowing sleep to take over and dreams to enter her mind.

Many mornings passed and before she knew it, a whole year had passed! She always woke to the bright sun, yawning and stretching before she headed down the hill towards the barn. To her surprise, Jinx was right there waiting for her every time.

“Are you ready for the day?” Jinx asked.

They ran into the barn and began to slow down as they each approached their prey on separate sides of the barn and once again she returned to Jinx waiting with three mice in his mouth.

“You’ve gotta show me how you do that,” Savita told him.

They settled down to enjoy their meal then headed outside to explore, they were “wild” cats after all.

“So… How long have you been out here?” Savita asked.

“All my life,” Jinx answered.

“Wow! I’ve lived in the city for the first year of my life but I soon left my family to live out here, sleeping in the dirt, on open fields rather than in alley ways,” Savita explained.

“Not me, my family has lived here for generations. I’m going on year four of existence,”

“Me too but year three of being out here,” Savita replied.

Jinx smiled michievlously and bumped her aside pushing her into a puddle turning her white fur brown and raced away before she could react.

“Oh you're gonna get it mister!” Savita shouted after him and took chase.

Savita noticed that Jinx seemed much faster than her and she grew suspicious but dismissed the thought and just focussed on catching him but the thought came back when she realized he was what seemed like miles ahead. He soon slowed to a stop.

“How are you so fast?” Savita panted her question.

“Who knows?” Jinx said with a shrug.

He seemed to be hiding something but she thought nothing of it until she heard paws shuffling a muffled goodbye before he disappeared.

“What is he up to?” Savita wondered to herself.

She headed home but it was hours before she fell asleep because she was busy trying to figure things out but one question remained, what was he hiding?

“Where have you been?” Savita questioned suspiciously.

“Oh, here and there, listen I need to…” Jinx started but was interrupted.

“No, you listen. I have been showing up every day and waiting hours for you but you never showed, I thought we were friends and to make things worse, you did this after you left me standing there only leaving with a muffled goodbye. What is going on?” Savita said angrily.

“Promise not to leave?” Jinx asked.

“Well, the truth is, I’m a Catch, my whole family is and has been for generations since the first four ancient cats…” Jinx admitted and went further into detail about the history of the Catch.

“So you're a Catch? A powerful cat that can be strong, fast, or smart but more angry also your all three, a Tri-Catch?” Savita questioned, she sounded doubtful but that wouldn’t last.

Jinx nodded and began to lift a boulder that was neither big or small but heavy onto his shoulders showing off his strength then wrote words that even Savita couldn’t understand but knew humans said, into the dirt with a stick, and finally sped down the hill then back up faster than she ever thought possible.

“Wow…” Savita was shocked and showed it in her meow.

Savita suddenly backed up and looked at him, she sighed and turned away, Jinx knew all too well what this meant.

“I’m sorry but you won’t be raising our son,” Savita told him.

“Our what?” Jinx said with a nervous chuckle, “But if your pregnant than I must raise him because otherwise who will teach him…”

“I will,” Savita said and ran off as fast as she could Jinx yelling behind but she didn’t look back and didn’t stop to say anything else.

Years passed and Oz had figured out the truth but since he ran off, he hadn’t come back so Savita went off to find him but instead of finding her son and his father, she found the barn she had met him in burnt to a crisp and a rotting body that she could barely tell was Jinx, she knew where he must be, if he even was alive. She sprinted for the spot she once called home and sure enough she found him, well a rotting version of him. She returned to Jinx’s dead body and dragged it to where Oz lay burying them both as best as she could then sat between them and looked up to the sky to say her final goodbyes.

“Oz, I’m so sorry that I never told you the truth and Jinx, I’m sorry I took our son to raise him on my own without even bothering to ask if you wanted that. Truth is I was so shocked by what I heard that it just took time to process and I should’ve returned him to your care sooner. Goodbye you two and Jinx, just know that the time we spent together was the best times of my life and take good care of our son.”

She then stood up and left the two bodies where they lay under the ground, returning home knowing her son was now safe with the cat she once fell in love with on the open fields of grass she grew to know and love and even though she hadn’t a clue what happened, she had a feeling, they didn’t die for nothing. 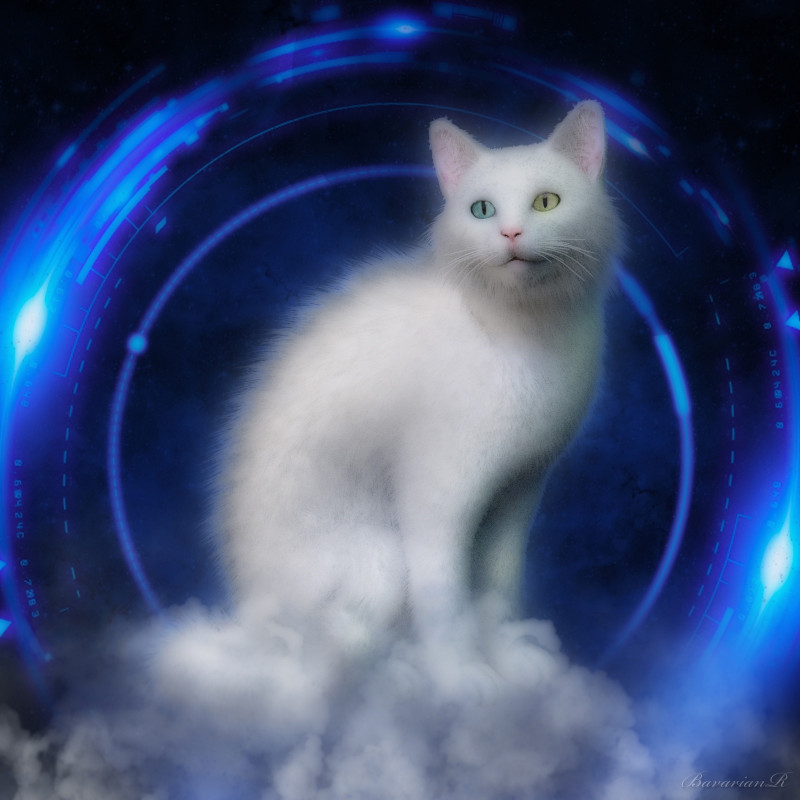 This is a follow up story to Here's The Catch based on how Savita and Jinx met. Please comment!