Three seasons since the king’s reign had come to a sudden halt with the spring queen’s rising to power, and three seasons time turned the hands of a new ruling. The heralding of autumn’s leave was upon the kingdom, with the falling of red and gold leaves in the breeze and black necked geese, beady eyes a-glinting, soaring on wide wings to a land far warmer then their current northern home.

Fall had come to an end, the queen cloaked in fine crimson silk and a mahogany dress that hugged every fine curve of her lithe dancer’s body like a royal lady’s lace gloves. She fumbled with the rings which sat on her left hand while at the same moment, gazed to the western horizon with deep set storm clouds: a feather light dusting of snow had begun to make its lazy descent downwards, the distant Smoke-Snake Mountain Range obscured by the oncoming blanket of white powder bound to arrive within the hours.

The dragon kings and queens normally arrived when taking the throne during their respectable season, but never did Lord Winter come with such an air of malice. Whereas a slight chilled wind blew and the occasional flurry swooped in, the bitter storms he brought with each and every thunderous wing beat never set upon the world so early in the season.

She shuddered, blood painted wings unfurling to their maximum span of ten feet and five inches and snapping shut: she felt that something was wrong, be it his health, his mental state of mind or some other cause for caution and fear. The castle Sans-Santiga, with its multitude of defensive and offensive means and watchtowers in which Lady Autumn stood, gazing to where the incoming king would be soaring from.

Hitting her pale skin, a single snowflake, its crystalline surface kissing her cheek with a light chill before melting away. If only winter’s looming fury passed by just as quick.

Her breath came out in small puffs as the storm crept closer, and her eyes looked to the ground: armor-clad knights, in the colors of her season and helmets plumed in silver and gold feathers, stood awaiting Winter with swords at the ready and unwavering fear in their hearts. All fifty-nine stood in silence and ever-alert, looking to the mountains.

A clawed hand grasped the stone ledge of the tower, heart beating frantically. With a heave, her form leapt onto it before launching forward off her perch, plummeting seventy-five feet to the ground like a diving falcon on the hunt. Faster now with every passing second her body fell to the earth…

And, with a great fiery burst of orange and white, the queen’s true form stuck it’s landing on four powerful talons that shook the ground upon landing: the quake was great enough for half of the guards to stumble over and fall onto their backs.

“Milady!” Three yelled out in unison to the dark red beast before them. “Winter approaches with-“

A wisp of ash grey smoke curled upwards into the sky from her flaring nostrils, ruby scales plating her body seeming to glimmer as if polished. “Take your post, Mero.” Her once musical voice became only a shadow of its true sound, now deep and ancient in tone. Dark gold antler-like horns formed a crown upon her head, ready to be forcefully removed for the next royal king.

From the roaring of the windy gales came the actual outburst of raw power, all motion on the ground halting immediately. Lady Autumn and her human guardsmen looked to the frigid mountain peaks, and, with their gazes frozen to the sight, caught their first look at Lord Winter.

His body was hard to identify from the swirling storm of a blizzard which followed at his heels like a faithful hunting hound, a solid mass of white and blue tints. Cold air was his breath, while the sense of impending dread declared his arrival.

“Stand back!” growled the queen, wisps of snow now reaching the small gathered group. “Here he comes!” Swords’ blades were forcefully shoved into the semi-frozen ground with hands grabbing the handle to support those holding them with an unwavering grip, others bracing for the frenzy which came with the coming of the season’s changing.
Talons, like knives, dug into the permafrost soil upon his landing, northern winds rushing into existence with each wing’s beat. Unnaturally purple globes, amethyst colored, glared down to the men gathered and to the current queen, his head lowered to her in respect.

“Winter,” He arched his serpentine neck, his head raising back to its normal position. “Dare you to think that you can rule this kingdom fairly and like a just king?”

“If I am able to take,” Winter’s eyes darted to the horns upon her head, the impressive symbol of status which sat on Autumn’s head. “The crown from you, milady, in the traditional manner.”

She laughed, “I would like to see you try!” And from the tooth-lined depth of her mouth emerged a brilliant jet of crimson and white fire, burning like the rays of the sun. But it was met head on by the counter flame, burning sky blue and grey, put forth from Winter’s jaws. Both plumes were extinguished, canceled out by the opponent’s breath weapon of choice, but the heated frenzy of battle flared up with renewed vigor.

The autumnal lady reared up on her back legs, her front claws slashing down at the male’s neck with the intention to break each and every bone he had but met with failure: his own claws had interlocked with hers’, a battle of push when it comes to shove.
His head bashed against hers’, the cracking of someone’s skull echoing with a stomach churning sound. Weight was shifted between the feuding beasts as was the advantage, the armored guards looking on and attempting to remain out of the dragon’s rampaging way.

A low, menacing growl was issued by Winter, as the white creature knocked Autumn down and pinned her scarlet body against the ground with his front claws, the queen snarling at his action. She writhed and squirmed, rolling around in a futile attempt to break free, but all proved useless. Her whip-like tail lashed at his spine, a screech of pain erupting forth from the challenging beast, but his claws would not let the fiery form free.
A snap and his jaws closed around her crown of horns atop her head. Her body gave up on fighting his strength, submitting herself to defeat and acknowledging him as the new king of the land.

“You reign from this day until Spring’s return.” Autumn mumbled, Winter’s grasp letting up and the aching pain in her side disappearing with the removal of his talons against her. “And when we meet next, your pride will be extinguished.”

He smirked, a toothy grin spreading across his face before glass-shattering roars of victory were heard for miles around. An immediate cold surged across plains and valleys, streams of water freezing and the last wildflowers of Autumn’s rule dying with the temperature drop.


The Frostbringer had taken the throne. 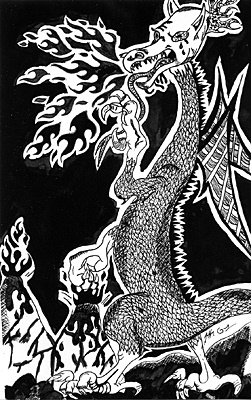 The author's comments:
Based on a piece of artwork I have created in the past, of a red and gold dragon breathing out a wisp of smoke and surrounded by flames.
Post a comment
Submit your own

THAT WAS SO COOL

i totally loved what u wrote, its compleatly action packed and i could picture every movement as u wrote.

its compleatly fantastic, i seriously hope u write more.

Favorite Quote:
"And I fear not what man can do; for perfect love casteth out all fear..."

View profile
"Hitting her pale skin, a single snowflake, its crystalline surface kissing her cheek with a light chill before melting away. If only winter’s looming fury passed by just as quick."

My dear, this is absolutely beautiful, that particular section made me catch my breath...