To Cut A Thread | Teen Ink

To Cut A Thread

She sat in the dark and wove. It was myth, pure muth, that one needed light to weave. She'd mastered the art many eons ago and her many hands artfully played the threads into their pattern, eyes locked to the ground.
She sat alone. It was myth, idiotic myth, that said there was three Fates. There was but one.
But perhaps the biggest myth of all, was that she tangles the threads. Truthfully, this is her punishment; she is forever crying, calling out in pain when a line is caught and sighing in relief when another thread is added to take it's place.
But his is all she knows, so she weaves the thread, she creates the pitures of our lives, then she twists them together, chooses the thread whose life is coming to an end, cruelly tanglign it, then she cuts it. This is the only time her eyes move; she blindly follows the path of the scissors, waiting for the pain to present itself.
It's all about balance; one line is cut, one life ends, and another thread is added, another pictures begins. But she herself has no balance. She lives, if she truly does, only to watch the world die around her and share their pain; her job will never end.
Of course, come say that she has died and our lives are our own. And some say that she was only ever a myth. But she lives on, weaving our lives--and our deaths. None have ever looked at her loom, not even herself, for to look upon the pirctures she creats, even on, would cause suffering beyond even hers. And to look upon one, is death.
As our lives spin on, so does hers. The only thread that does not pass through her hands, is he own, for surely she would cut it without a second thought.
Hers is the only thrad that can be cut by herself. 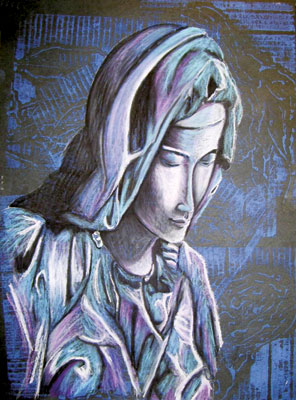