As Simon glanced at the dormant vessel, he felt as if he should turn back, but he would never abandon his mission. Scientia, the research and experimental company Simon works for, had ordered him and his team of soldiers to investigate one of their space vessels used to perform government experiments that they had lost contact with three days ago. Even if it was just a communication problem, something didn’t feel right. . ..

“Is there a problem Unit01?” Simon jumped at the metallic voice of his team’s AI, CAM. “Your heartbeat indicates your thoughts toward the mission are uncertain.”

“I’m fine,” Simon said sternly. “What about the others?” There was a pause.

“Greg, Logan, and Ron are normal. However Gerick has the same uncertainty as you.”

Gerick was Simon’s younger brother. It was strange that they were feeling the same about the mission. And it wasn’t all just a feeling; the ship was just sitting there with no lights on as if the power had been cut. That aside, they still had a mission.

Simon flew their own ship around to the hangar area and landed it in one of the docking cells. He was the first to get off, floating over to the far wall, followed by the rest of the team. They all clicked their magnetic boots to the steel floor and started down the hallway when suddenly they heard a voice in their helmets.

“ALERT! The ship’s emergency protocol is causing it to draw power from the ship we arrived on to use for its own necessities.” CAM said with no genuine distress.

They had barely listened to the message before Simon started calling out orders. “Greg, go see what you can do to stop the ship from using our power. Ron, go do anything you can to help. Logan, look for anything that can be used for power. And Gerick, follow me, we’re going to find the crew and see what the problem is.” Everybody did as they were commanded. Gerick followed Simon down the long hallway for several minutes until they reached a locked door that blocked their path.

“Hmm. We should get back to the others. We still have a job to do here,” Simon told Gerick. After getting back, Simon checked on everyone’s progress. Logan hadn’t found anything that still had power, and to their dismay Greg wasn’t able to stop the ship from leaving them completely out of power. They all stood there for a moment, taking in the reality of the situation.

“Uh Simon,” Greg said with a shaky voice, “b-before the ship took all of our p-power, um, I was able to, uh, download the map of the ship into my suit. There’s a terminal at the end of the hallway where we could probably be able to, uh, find the ship’s AI unit.”

“Can’t do that, there’s a locked door down there and the powers out.” Simon sounded even more disappointed now.

“Actually, the doors operate on their own closed circuit. If we’re able to figure out how to open it, it’s a straight forward shot to the terminal,” Greg said, this time with more confidence.

“Well, a lot of good that AI does us, the power’s out. And once we find this AI, how’s it supposed to help us with the power issue?”

“The AI has its own power source so that if the ship loses power, it can save all of the data. And once we find it, it should be able to tell us where the ship stores its emergency power. It might take me a while but I should be able to reroute the power back into our ship. Were you able to find any of the crew?”

“No. We were only able to get as far as the door. But other than that, this place looks like no one has been here in months. But if you think we can do this.” Simon threw a glance in Greg’s direction. He nodded, shaking as he did so. “Then let’s do this.”

When they got to the end of the hallway they were faced with the problem of getting the door open. “Great, now what are we supposed to do?” said Ron, “you got a key or something?”

“I got our key right here!” Logan said as he brought the hilt of his knife down on the door hinges, breaking them off.

“Well that solves that problem. Push on.” Simon ordered. In the next room there were old computer desks with papers strewn across the entire floor. As they surveyed the area they found that there was a faint red light at the top of the room along with several broken ceiling tiles. The papers were odd too, they had rips and holes in them, but the strangest thing was that they all looked like they were dragged toward the next door.

“CAM, what do you make of this? What do you think happened to the crew?” Simon said, wanting some answers. 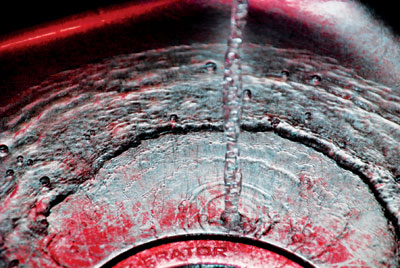 The author's comments:
this is my first "good" story. I have already submitted it to another competition and am waiting on results. This story is about 3,000 words and is kinda slow at the beginning but gets better toward the end.
Post a comment
Submit your own