Favorite Quote:
"You find him, you kill him. You cut his head off. Any one want a cookie?"

Milk is sticky and bitter. Ty spilled milk on the kitchen counter.

Ty cries over spilled milk usually, this time he was angry at the gallon of milk for not pouring into the cereal the way he wanted it to.

A few months ago Ty dropped an entire gallon of milk on the pavement in the drive way. While the pink flamingo in the neighbor’s yard watched with its plastic black eyes. Its wire metal legs being stabbed into the hard ground unable to pull out and help Ty with the groceries.

The milk went everywhere, and that’s when he started to cry.

His moment of truth when he realized how much money his mother sacrifices for him—and Verona for that matter even though she actually isn’t blood related—how selfish it was for Ty to be so clumsy.

It wasn’t the milk.

Ty ate his breakfast and waited for Verona, his best friend, to pick him up for school. She arrived at 7:30 sharp and they left, spiraling leaves scrapping on the driveway behind them.

At school, it was a normal and miserable day for them.

The school bullies bullied. The cheerleaders cheered for the victims to die. The victims begged.

Ty was a victim, and Verona, too. They didn’t beg though. They fought. Pitifully.

“Ty! I think you smudged the guy-liner too much this morning!” Taunted the cheerleaders, their high pony tails straightened perfectly, whipping around their scrawny heads, and pierced ears.

Verona and Ty pay no attention to their stupid and poorly concocted insults. The cheerleaders and football players aren’t very creative.

Scuttling away from the over grown toddlers, Ty glances around for more enemies. But Ty and Verona are in the girl’s bathroom, no one in sight.

Verona gives a heaving sigh of relief, and then plugs her nose because she just inhaled a lot of ammonia fumes and mold residue.

“Why don’t I ever remember that it smells really bad in here?” She gasps.

“No idea, maybe your need to make a better and bolded mental note. I did.” Ty answers sliding his backpack down his shoulder to the crook of his elbow, and leaning on the wall near the mirror and disgusting sinks.

Verona opens her backpack to glance at her band less watch that is stitched into the back pocket inside her rainbow striped bag.

The fuzzy colorful key-chains on the front of her backpack jingle on the wet counter of the bathroom. She rummages around, moving things from obstructing the view of her watch.

“It’s seven forty five. We need to get out of here before everyone is in class so you’re not caught in the ‘ladies room’” she rolls her eyes and pronounces lady like it’s a very unique British word.


“Yeah and before the G club are the only people still in the hall.” The G club, are the kids that fail everything. G comes after F so obviously, they’re dumber then dumb.


Verona and Ty write fan-fiction on how David, the quarterback, became stupid, embellishing the writing in the story, to make Ultimate Dumbness, in David’s eyes a goal.

Ty and Verona start a conversation on this, while in the midst of a "eureka" about David’s taste in girls added to the story, a girl walks in the bathroom.


Ty and Verona fall silent, and the girl is left to say something.

“Hi, I’m Ulivia. I just transferred from Nortin High. What are your names?” She asks. Her smile is extremely shiny and perfect. Teeth white and straight, lips perfectly full and rounded correctly and symmetrically. Eyes hazelnut brown, and no other corresponding color to mess with the almost measurable dept of them. Dark caramel hair, not straight or curly, with sleek small waves exactly four inches above her elbow.

Ty’s mouth drops a bit and then he straightens and looks at her clothes.

Between Calvin-Cline, and Aero-postal clothing, she reeks of Sweet Pea Bath &amp; Body Works, perfume, shower gel, body lotion, and sparkle spray. As if Ulivia couldn’t decide what to wear, so she put them all on.


“I’m Ty, and this is Verona.” Ty says, gesturing at both of them. Ty felt stupid after that.

Ty and Verona gave each other weird-ed-out glances.

Nobody talks like that, unless they have mental issues…Ty thought. I wonder if Verona is thinking the same thing...which is possible.

“I’ve got to get to class. You two have fun!” Ulivia leaves very quickly and suddenly.
“WHAT?” Verona and Ty said. “FUN?” They glance at one another an almost scream.
Class starts and Verona and Ty are just in time. They sit down and immediately see the creep Ulivia in the only open seat, --particularly the only new and un-graffiti one-- in the very front row nearest to the teacher.


They groan, not heard by anyone since they are sitting in the back row, and the teacher, Mr. Dustmen, the middle aged teacher that looks like he just emerged from a pool of melted marsh mellows, has not entered the room to start class.

David was in their class. A lot of other over grown hormonal toddlers that over runs the school with stupid uncreative names, speech and style, are also in spit-ball range.

The classes droned on and Verona and Ty didn’t speak to Ulivia again that day. But they certainly didn’t want to.


After school, Ulivia walks home. Unnoticed by almost everyone except for Ty, and Verona.

They look pretty smart…..she thinks. The geeks in the bathroom, what a pair.

Ulivia reaches her house, all the lights are off inside. She unlocks the door, and steps inside. Buzzing wings can be heard in the living room and kitchen. The smell of rotting something is everywhere in the house, like a toxic wave of radiation it fills her nose. She likes it.

She walks to the kitchen, a dark form on the floor unmoving, fly’s buzz around her ankles. She opens the refrigerator door, pulls out the milk, and a large chunk of something folded in tinfoil. She unwraps it on the counter. She picks up one of the long strands of grayish pink coil, and dips it in the milk. She eats it.

While eating, she cotes herself with shellac. The spray holding her skin tightly to the rest of her body.

“Don’t want to fall apart at school.” She says as she pat's her cheek back into place.

She picks up a piece of paper that says "to-do list" on the top, and reads it aloud to herself and the bodies.

"1. Find family, eat brains. (check) 2.Make decaying body look amazing. (check) 3.Perfume O.D. (check) 4. Meet smart kids at school. (check) 5. Eat school one by one. Haven't started that yet." She puts the list down on the counter stepping over the body on the floor, and running up the stairs to her room. 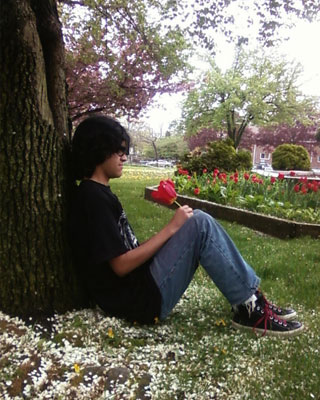 The author's comments:
So much fun writing about Zombies!!! I think Zombies will become more popular then Vampires one day!!! Thats gonna be one heck of a day. A very Zombie-lious day with lots of eating of organs and decaying poeple!!!

My class mates think I'm insane or suffering from an unknone trauma that makes me write this stuff.
I think I made a few of them gag....oops.
Post a comment
Submit your own