I was not alive.

But it was wrong. I was not alive.

The wood, as if it did not care to see the world or the people or the towns and cities, was dead beneath the strong lean rails stretching for a thousand miles across prairie and woodland where the wind wafted the music of civilization.

“Why am I here?” I asked the sky, and then, “Why do I ask when I know I am here because I exist and have two legs and used them to walk to this very spot here where I am right now?”

The tracks answered, an earthquake sprouting deep within them. And the train rushed to me and screamed to silence.

Once far from the prairie, I jumped. I leapt and rolled from the carriage, clothed in dust warmed in the orange sun shaped in the sky by the gentle hands of gravity. Into the town!

But the town was missing. A single house sank into the ground about a mile from the tracks. In front of it was a mailbox swathed in dust.

Why would this house need a mailbox? But then, having asked, I knew. Not out of need, but out of tradition. A mailbox looked right.

I knocked, and a woman swung open the door. “Hello! I can see you're lost. Why don't you come in and I'll help you find yourself?”

She lit a fire and set a kettle to it. “Have you been lost? Most who come by here are. I bet you are. You look lost, in a way.” She looked into my eyes.

We sat with sweet-scented lemon tea on a pair of rickety chairs. “So,” she asked, “how've you become so lost? I can see it in your face. You simply aren't there anymore.”

She stared, then laughed, then cried. “It was wonderful, once, to be alive!” she sobbed. “I miss it – the pain, the glory. You can't be happy, dead. It's not in the system. Not ever. Not truly. It's only right that way.”

“Right that way! Is it ever? But I was happy. Before I came here. In a field far from anywhere and close to nowhere. By the tracks ….”

“I don't know.” She looked down. “But I haven't even asked your name, though it won't do either of us any good. Names are useless here when there are only two of us. You must assume one, when talking, is always talking to the other and has no need to address him or her by name. But tell me, just because it's right.”

“Leonard Halsborough. Pleased to meet you.”

“And I'm Claudia. I used to have a last name, but I've forgotten it. Death does that to you.” She rose. “Now, let me show you the town.”

I stared at her. “The town? I was looking for a town, but there wasn't one.”

Claudia led me far back into the house, down into the basement depths, through a door, and …

It was everywhere, streaming through the air in ribbons cut loose to fly with minds of their own. And far off in the distance, a tinkle of music. A jingle, more like. Of bells or chimes or the dancing feet of fairies in a ring. And this place, I knew, was a different time, though not quite a different place.

And here was the town, in its bricks and wood and metal and paint, built to be strong and long-standing with its people rushing and living, more alive than ever in their building. The streets were new auburn bricks the color of the fire that shaped them, and the buildings, half-erected, cloaked in stilts of freshly cut wood. And I walked over this street, so new, alive.

“You aren't lost, are you?” A young man leaning against a new building looked my way.

I was startled and felt deeply inclined to answer him. “Why, I am. How on earth did you know?”

A grin spread over his face. “If you ask enough folks, you'll find one who's lost. The Office is over that way. Or you could go find Claudia.”

“Claudia! Why, I met her only a minute ago. Her house, it was all alone …”

“Really. Well, if you see her again, give her my regards. If you're going to the Office, you'd better go now. It closes at dusk. Over that way.” He gestured west.

I thanked him and started to leave.

“No, no,” he said, looking at me doubtfully, “names are very important.”

The Office was indistinguishable from the buildings around it, except for a blanket of dust that had settled softly over the window panes and shutters. And over the white wood was painted, in faded letters:

“Office of Recomposition, Rehabilitation, and Recollection”

Beneath was a poster that read:

“You were brought here for a reason.”

Is that so? I thought as I pushed open the door to a jingling of bells. The waiting area was draped in green velvet. The chairs sagged slowly to the floor as if they were filled, though none were. Behind a desk, a small-framed woman with a dramatically curved face sat.

I approached. “Hello, can you help me?”

She did not look up. She was focused intently on something I could not see behind the desk. “You've lost yourself?” Now her eyes rose. “You don't look lost, not in the usual terms, I don't think.” She did not write, but painted letters onto a page. “What's your name? I don't know if we need names, but I'm expected to write them down.”

“Never mind. I've got it here already.” She smiled, for the first time, with her delicate lips and round cheeks. “This happens quite a lot, I'll admit.”

“Has Claudia been here?” I asked.

“That's just who signed you in. Most of the folks who meet her end up here. It's a bit of a chain reaction.” She stood, a clipboard holding a few loose papers in hand. “Well, are you ready to find yourself? Only if you're ready, of course. My name is Inez.”

I followed her into a back hallway dimly lit. We turned down a spiral, metal staircase.

A scary darkness, I thought. But then again, dark leaves room for glorious opportunities.

Glorious. And it was.

In the center of the room, glowing in joy and grief and glory, stood a machine. A rumble grew from inside it to a roar, a mechanical purring of bolts and screws and nuts, and red buttons glared warmly.

“Here is the Finding Machine,” said Inez. She walked circles around it, admiring it. “And now,” she said, “let me explain the process.”

“You've lost yourself by forgetfulness, really. That's how it always happens.” Inez steadied herself against the machine. “All you need is an old sentiment. A song, a fragrance, a look into the past you've forgotten,” she said. “Then it all comes rushing back. Or most of it, anyway.” She pressed a button. “Step inside, now. Close the door.”

I swung shut the six-inch thick metal door. The walls were sheets of light, like slices of the sun, yet cold as a splintered star.

All at once the machine rose to life with a great whirring like an insect and splashes of color and sound and feeling. Oh, it was marvelous! Oranges, the scent of oranges juiced from orchards in the Golden West. Apples and pears and blueberries and a million other scents were in the air. And then –

The stars were one with the Earth, and silence fell upon the universe. Not a sound wave was alive in curved space. The stars leaped and danced to the sound-nothing, moons laughing silently in their warps of time. Alive, alive, cities and towns and villages streamed by, a few on Earth but most on distant planets.

And at last, the music, twinkling, the bells which I had heard and the song of strings and brass and voices, descending over my head. Beautiful, beautiful! Encore! It swelled, fell, crescendos reaching heights beyond mountains, down to the depths of a cave of blackness when the machine shuddered and fell silent, blindness.

Inez stood in the doorway. “You've found it?”

And then I had. “Yes! This town! I know! I built it! I lived here, died here, traveled back here, saw it again! And the machine …”

“You are its maker.”

And the machine died in flames, its metal running like honey over the red eyes into the cracks in the floor, the flames licking up after it. The blaze devoured the Office with the desk and the chairs, scents of oranges flying and bells jingling until the end.

Inez and I walked from the ashes and charred white wood alive, alive!

Off into the town we walked, betwixt the buildings half-built and the road half-paved, more alive than the town and the cities and the Earth. 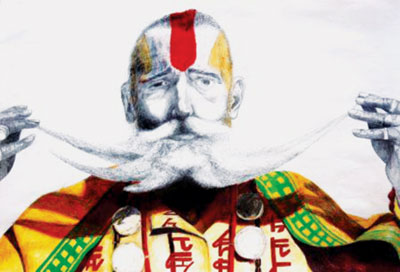 The author's comments:
I wrote this piece on impulse of wanting to create a surrealistic mood.
Post a comment
Submit your own