So the rumors were true. She was there, right in front of me. She had saved my life.

The Fallen Angel had returned to Earth.

The legend was told differently all over the world and not all of it was accurate.

Apparently, there was an angel that had fallen from the heavens a long time ago. She tried to fly back but she found that a gate was blocking her path. To open the gate, she needed a key. To obtain the key, there were certain tasks she needed to perform.

Task 1: Save a mortal in danger.

Task 3: Bring a dead mortal back to life for at least five seconds.

Task 4: Bleed and tend to the cut yourself.

Task 5: Rescue an animal from a hunter’s trap.

Task 6: Plant the seed of an oak tree near a river away from civilization.

She carried out those tasks and received a key from a sacred spring. She then flew back to her heavenly home and opened the gate.

During her time here on Earth, many people had seen her. She was hard to miss.

Beneath her robes, two white wings were folded down neatly. She was fair and her eyes were so blue that you would spot them in the dark from miles away. Her hair was brown and she was tall and slender.

While performing the required tasks, she wore a mask and covered her wings and all of her body. She seemed almost to glow. Some said that whenever she spoke, it sounded like an angelic choir singing.

But she refused to speak to me.

She sat hunched over the fire between us, warming her pretty hands.

I cleared my throat and asked, “You completed your tasks and you went home. Why did you come back?”

“Who would ever want to come back to Earth when they have heaven waiting for them? Literally!” I said.

I sighed, frustrated but grateful. A large wildcat had come charging at me. She managed to stop the attack without hurting it or herself. For some reason, she remained with me for a while.

She turned her back to me and lay down. And to my surprise, she spoke.

Her voice was gentle and just loud enough for me to hear.

“You mortals need all the help you can get.” She said.

I smiled, laying down on my back. Tomorrow I would ask if I could see her wings if she hasn’t run off during the night.

She was as elusive as a unicorn. 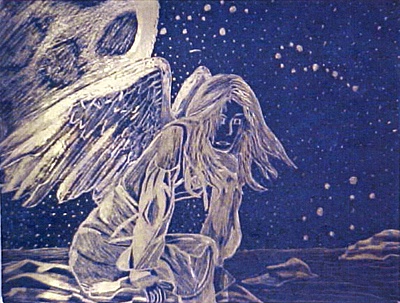