We love soccer. It’s our favorite sport. We’d never even dare to quit. We always lose every game though. When the other team wins, we always give them a prize. We love to give the other teams that prize. Soccer is the only sport our school has a team for. They decided to build the soccer field on a huge hill. None of the students that go to our school are athletic anyway. All of them are extremely intelligent though.
One of our students wins the national science fair every year. I’ve never won the national science fair, but I’ve made it to the finals. This usually causes the kids from the other schools bully us. They call us names. They push us around. It’s so irritating. Every time someone bullies me, I think about how I’m going to beat them at the next game.

The game is beginning. This game, we decide not to do positions or anything like that. We decide to just chase that ball. Of course, we still have a goalie, but he’s really lazy.
“Hey Morons!” Big Joe, the worst of the bullies on the other team. “Why don’t you go back to your home planet you fat nerds?” He’s saying this because of our team name. I don’t even know why they decided to call our team name the aliens.
Suddenly, the ball rushes past the Goalie. Goal 1! Five minutes later, another goal. Another and another and another. I start to wonder if we’ll have to give them their prize. I hope we do. That would be fun. I grab my lucky foot. Now of course, I’m not actually grabbing my own foot. I’m grabbing the foot hanging on my necklace. My whole class has one. They’re sort of like those rabbit feet you keep for good luck except they’re a different animal.
The other team gets five more goals. Then it’s half time. Half time goes by as fast as a spaceship, zooming by. The other team gets another five goals and the game ends 15-0. A smile slowly forms on my face like a lion trapping its prey. I turn and look to Coach Doedgjifi. Isn’t that an awesome name? I’m still looking at him, waiting for a response. Waiting... Waiting... Yes! Coach gives me the thumbs up. That means we can give them the prize.
“Well, it looks like you beat us,” I say. “You get the prize.”
“Awesome!” Says Big Joe. Isn’t Joe a terrible name?
“What’s the prize?” Big Joe asks.
First, I say, “Did you know that in some languages, ‘prize’ means capture?” Big Joe looks at me funny. That’s when I pop my contact lenses out and reveal my real eyes. I hate my contact lenses. They always lower my vision. But right now instead of contact lenses that are meant to hide my true eyes, there is nothing but my green, glowing eyes. That’s when the other team starts to run. We all take out our electric whips and the chase is on. They don’t stand a chance against us. Several of us capture some of the kids, but I go after Big Joe. He’s running fast, but I’m faster. Eventually, we get to the edge of the hill. Big Joe runs down the hill as fast as he can. But I stop in my tracks. When he gets to the bottom, he keeps running. No matter. I simply adjust the settings on my whip to make it longer. I then toss one end of the whip into the air and I hold the other end with my hand. Big Joe tries to escape, but he can’t. The whip falls on him and he stops. The whip then wraps around his body and I begin to drag him out. Paralysis is what the humans call this. The electronic whip paralyzes the body temporarily. We then tie up everybody we caught and prepare them for shipping. I sit on a bench exhausted. After all, capturing humans for slavery isn’t always easy. I then enter our spaceship and buckle up. I can’t wait to get to our home planet. Then we can sell the slaves and get some good pay. The humans may think they can be mean to us and call us names and push us around, but tell that to the 5,678 humans we've put into slavery. In a week, we have another game, and I think about how many prizes happen this time. After all, we love to lose. 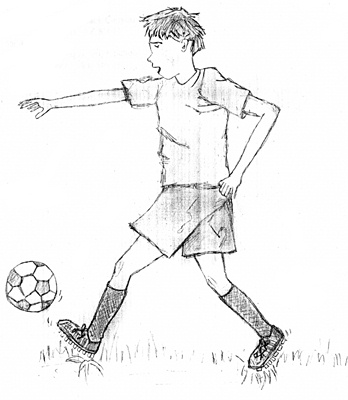 The author's comments:
I played Soccer for one season at my school. We lost every game and I started to wonder why a team might lose on purpose.
Post a comment
Submit your own