The girl opened her eyes. Where was she? In fact, who was she? She wracked her brain for any memories, but could not think of anything. She looked around, hoping that her surroundings would give her clues or maybe bring her memory back. What she saw was a library, with only a few people around. shelves were stacked to their fullest, some almost overflowing with books. One librarian, or at least she presumed it was a librarian, was stacking books on shelves; she kept glancing at the girl. The girl wondered if she had done something wrong, but every time she thought the librarian was looking at her, she turned her head away. The girl looked around some more. She saw a boy of about 17 or 18 approaching.
“How did you get here?” he asked,
“I’ve been looking everywhere for you.”
The boy looked nice, but for some reason the girl didn’t trust him. She felt strangely afraid of the boy, who was seemingly completely ordinary. He wore a striped polo shirt and had on faded blue jeans. She was going to run, but it seemed her feet were glued to the ground. Why couldn’t she move? She wanted to get away. The boy was getting closer now, and the girl was terrified. The boy looked a lot more threatening as he got closer. She could tell now that he had razor sharp teeth, and his hands had two extra fingers on them. The girl wanted a way to escape. Perhaps to be invisible, or turn into a bird and fly away. Suddenly, her feet ripped off the ground, and she felt a strange tingling in her legs. The girl looked down and saw everything from a birds-eye view. Literally. She had turned into a bird. She flew away as fast as her new wings would carry her. She could hear the boy screaming behind her,
“Darn it, I was so close!” and the librarian exclaiming,
“I told you it was her! How could you let her escape?”
As she dazedly flew farther away, a thought came to the girl.
My name is Esmeralda, she thought; and indeed, that was her name. That was all she knew. 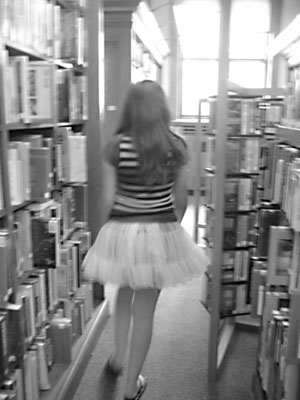 I wrote this in creative writing class about a year ago. I was looking through my old stuff and discovered this. I re-vamped it, and here's what I came up with. Comments, please!!! :)