“What does he do for a living?” My mom’s face was purple with fury. I had been banned from seeing Sam, my boyfriend, but had just been caught breaking that ban. I hesitated, just a bit too long.

“He’s a businessman.” I prayed she would believe me.

“Great.” She started to turn away, and I breathed again. Then she spun back, catching me off guard. “Now tell me who he really is.”

Breath – you can do this Mel.

“I told you. A businessman. What do you have against him anyway?”

“He’s a shady character. I don’t want you around his type. But if you insist he’s a businessman, what company does he work for?” I gulped. I can’t falter now!

“Ernest Tinner. The men’s watch outlet.” Look it up – I dare you Mom. Of course she’s never seen an Ernest Tinner. No one has. But she can look them up and she can call them, and his name will register. Her suspicions, at least on the point of employment, will be quelled. She will probably assume it is an exclusive company, and she just hasn’t run across one. Play on assumptions – that’s what they said.
In a way it was better before my loyalties and my thoughts were tangled in well-planned lies. Before I started dating Sam. But in a way it is also exciting knowing the things I do. I didn’t mean to find the folder you know. The date started like any oth-

“Melanie! The manager reassured me, but you are FAR from off the hook! Eighteen is too young to head down this path. He’s a bad kid!” I kept control of myself, despite my screaming heart. This was as good of time as any to learn to withstand pain.

“Listen Mom, there is no ‘path’ I’m going down. It’s just me. Same as it’s always been. The golden one. Remember?” She started to cry and I held her close. I breathed in her strawberry shampoo. Just as I started to relax, the fight behind us, her body went rigid with fear. Dad.
I turned slowly to face his hulking frame, preparing a groveling monologue. I could smell beer on his foul breath. But most terrifying, I was staring strait down the gaping mouth of a ’45. I screamed, the high-pitched sound shattering the tense atmosphere. He took a drunken swing, and then seemed to remember his gun. He stopped to cock it and my blood ran cold.
At that moment the door clicked open, but my dad was too drunk to notice. My eyes flickered towards it. Sam was reaching in the pocket of his trench coat, rain dripping off his brown hair as he glanced at what he was doing, then looked back at us. His usually sensitive hazel eyes had hardened, edging out all fear and were completely focused. A bouquet of dropped flowers lay at his feet, sodden blooms spread out haphazardly. I re-focused on the terror before me, to avoid drawing attention to the door. My heart beat wildly in my chest. For how much longer, I wonder?
My dad had finished cocking his gun. He fired a blind shot, destroying the overhead light and raining colored glass down on my screaming mother and I. Needles of color pierced my skin, and I bit my lip, tears welling in my eyes. Show no weakness, not now Melanie. Sam was running towards us now, silently sprinting, hands locked between his knees. My dad aimed the gun and I squeezed my eyes shut, pulling my mom towards me. A shot rang out, cold and merciless. Hot blood splattered my face, and I fought the urge to throw up as I grew dizzy.
I lost control. It wasn’t my blood, and I didn’t want to know whom it belonged too. I didn’t want to see, but my eyes shot open anyway. The last thing I saw before I blacked out from emotion was Sam handcuffing my father, who had a bullet hole in his gun-holding hand. As I faded at the edge of consciousness, I heard Sam’s voice, calm and collected as ever.
“FBI. You are being arrested on grounds of abuse and attempted murder. You have the right to remain silent.” 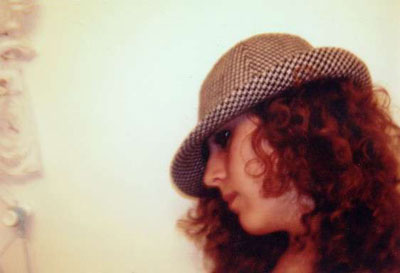 The author's comments:
I was on the plane with my Great Aunt and my cousin. My Great Aunt pulled out one of those airplane magazines, and out of the corner of my eye I thought I saw a guy in a black suit on the back cover, making an idea pop into my head. I tore through my carry-on looking for paper, and this is what happened. :)
Post a comment
Submit your own

Thanks! haha the rushed can be explained - I was on an airplane when the idea came to me, and I didn't really have much paper.  I will work on it!

View profile
I thought this was really good.  Interesting story line, however, I would have liked to seen this been expanded upon. Some parts seemed rushed.  But definitely not 1 or 2 stars! J7X