The Castle of Murder | Teen Ink

The Castle of Murder

Whack! Another knife sailed by my head. Swish. A trapdoor emerged under my feet. I hurdled over it. Wow, I thought to myself. This has been one of the most horrendous days of my life, that all started when I had go watch a movie with my Adventure group. They always seem to get me into trouble. Yesterday during a normal bus ride, the fiasco had started.

Crunch! Rumble! The sound of the wheels on the road was almost rhythmic, as it hurtled us along the country road at 60 mph.

“Are you absolutely positive this is a short cut?” Loudly, I yelled over the deafening sound of the car.

“Positive!” Yelled our butler, Chives. We had hired him to drive us wherever we needed to go. By “we,” I mean our Adventure Group. Our Adventure Group consisted of me (Joseph), SpongeBob Squarepants, Patrick Star, the itsy bitsy spider, the last dodo bird, John, Steve, and Bob the Builder. “I’ve driven down this road thousands of times, and never once ended up in a ditch.”

Shaking frantically, SpongeBob asked, “Ending up face down in a ditch isn’t what I want yet. So pull over before you-” Boom! A sound like a cannon being fired shook the car, as Chives pulled to car over the a stop on the side of the road.

“Just as I thought,” announced Chives. “We’ve blown a tire. No thanks to someone distracting me while I was driving.” He stared intensely as SpongeBob. “Now the matter is where to sleep, the sun is already proceeding to set, and I won’t be able to change this tire during the night.” That fact was true. Our mini bus carried an extra tire, in case of a blow out, but no one could have thought of bringing a flashlight, or something luminescent. Even though every time Chives takes us through one of his famous “shortcuts” we always blow out a tire. “We need to set up camp somewhere out of the weather.”

“How about that castle?” I asked. My idea seemed like it was well thought out. Everyone agreed. As we walked toward the castle, something seemed evil about it. The castle started at me, almost whispering “Come right on in,” so that only I could hear it.

After creeping across the moat, via a draw string bridge (how expected), I kicked to door open. Reluctantly it swung open. There was dust everywhere, but nobody minded. “First person to each bedroom gets it!” yelled Patrick, as everyone started to scramble to the rooms. Running up the stairs, I jumped into the nearest room. Hopping in bed, I breathed a sigh of relief. This room was mine. As I was thinking those relaxing thoughts, I somehow dozed off into sleep.

Twelve’ o’clock, midnight. Thud! Splash. The body falls lifelessly into the cold dark moat, the veil of darkness protecting the killer. No one would know what he had just preformed. Looking around suspiciously, he slid back into the castle.

Eight’ o’clock a.m. “Aieee,” Screamed John, pointing out the obvious. “SpongeBob is dead!” SpongeBob was lying there in the moat, lifelessly. A frying pan stuck in the back of his cold neck. Everyone was awestruck, who would murder this childhood hero? Personally I could not believe it. Around me, John, Steve, the itsy bitsy spider, and Patrick were bawling. Although, Patrick’s crying sounds different, almost as if he had rehearsed it like the presidents practice their speeches; they practice them, but they still sound fake.

Before I could even complete my though a blood curtailing scream rang out, “Ahhhhhhck!” It had been cut off, almost like somebody wanted nobody to know about it. When the scream reached my eardrums, I started sprinting to the epicenter of the noise. If I had taken the time to look around me, everyone else was following suit. As I searched frantically for the person who had been murdered, my eyes fell upon three lifeless bodies. I looked horrifically upon the cold dead bodies of Chives, the last dodo bird, and Bob the Builder. Checking each one of their pulses, I found out Chives was still alive!

He began to cough up blood, “The House… the House is alive!” he whispered, as he was holding on to the last strings of life he had.

“The House is alive?” I asked quizzically back.

There was a sword that he was grasping in his hand; it looked almost as if he had tried to protect himself. “The House is alive!” quietly he repeated, and then his eyes turned blank, soulless.

“Our friend is gone,” I proclaimed, as I shut his eyes. After I took a few steps I retreated back to his corpse. Swiping up his sword, thinking I might need it later, I swiveled around to John.

“Chives, he’s dead!” Yelled John. He paused then proclaimed, “We need to find out who is killing everyone.” Steve and the itsy bitsy spider agreed. At once they took off for the stairs.

“Guys I don’t think that is a good-” Suddenly I cut myself off. It did not matter; they were out of earshot already.

“I agree with you,” pronounced Patrick, as he pulled out another sword from nowhere. “Since, no witnesses are around, I am going to go kill you now. Yes it was me that murdered Spongebob, but not those others. You may ask yourself â€˜Why? Why would you do this Patrick?’” This was exactly what I was pondering, while looking dumfounded. At the same time though, I was inching my hand to the hilt of Chives’s sword. “Everyday it was the same routine with Spongebob, him running around yelling, â€˜I’m ready, I’m ready’ never shutting up! So I silenced him. And now that I’ve explained my entire plan to you, it is time for you to be persecuted.” He sprinted toward me. Boom! A cannonball was launched into his stomach. Patrick flew back and hit the wall like a hammer, dying on impact.

“Wow,” I whispered. “That was extremely lucky.” Swiveling around, I looked to find where the shot had come from, but I did not have any luck. Maybe everyone else is still alive, I though to myself. Splat! John’s body hit the floor behind me. I jumped around, and whispered, “They got John too? Oh well at least Steve isn’t dead.” As I said that, Steve’s body was hurtled over the edge, landing on top of John’s body. I suppressed a gasp, “At least the itsy bitsy spider isn’t-” A size 10 brown loafer was thrown over the edge of the stairs. The smooshed corpse of the spider was probably stuck to its sole.

“I have to find out who this mass murder is,” I said frantically to myself. Hurtling over the two bodies and the one shoe, I sprinted up the stairs, two at a time. Reaching the top, I gazed around; there were no doors, or windows. “Where did the bodies come from?” quizzically I asked myself; being in a house’o’murder for a day makes you explain everything out loud to yourself.

There was a noise, and I hit the deck. An axe hit the spot where my head would have been. Thwack! Popping up, I sprinted down the stairs. Where did that come from? Nobody was there. Whack! Another knife sailed by my head. Unless, I though to myself, this house is what has been murdering everyone? Yes it makes perfect sense. All of the murders happened when nobody was around. The evil house could pick everyone off one by one, and never get caught, but I had discovered its secret. A trap door opened underneath my feet, but I hurdled over it. “It is no use, I’m going to be much harder to kill than anyone else,” crazily, I screamed out for the house to hear. I almost thought a heard a reply,

“Wanna bet?” evilly, the house seemed to answer. Everything was shaking. I stopped. Oh no, he is bringing the house down, literally. I started to sprint towards the door, but I never made it. Pieces of brick were falling all around me. The door was five yards away, before a huge brick hit me. Searing pain went down my spine, as I stumbled to the ground. I lied there, watching as the house came down around me.

Then everything turned pitch-black. 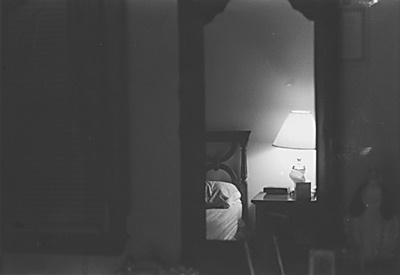