Favorite Quote:
“Two things are infinite: the universe and human stupidity; and I'm not sure about the universe.” -Albert Einstein

I’ve solved many cases in my days, and caught countless criminals. Murderers, thieves, drunkards, arsonists, I thought I’d seen it all. That is, until one day, when I got the phone call about HIM. I remember that day perfectly, except it was night, about nine-thirty at night, the air was cool as I sat inside my office smoking one of my cigars. I was thinking about the case I solved just that morning, family of five burned to a crisp in their house. As I sat there, running through every shred of information about the case, the phone rang, snapping me out of my trance, and out of my chair. Staggering to my feet, I limped to my desk, grabbed the phone cord, and slipped the receiver to my ear. I heard a raspy voice through the phone, which I instantly recognized to be the new rookie at the police station, O’Malley’O’ConnorO’BrianO’SulalevinO’Toole, an Italian immigrant, but for legal reasons we called him Bud.


I pulled up into the lot in my 1940 Chevrolet Coupe 2. Bud pulled up the crime scene tape, allowing me to limp into the house.


“This ones a disturbing one Gimpy, you sure you can handle it?” He asked me, snickering.


“I’ve seen it all rookie” I replied, entering through the front door. The sight I beheld made my heart skip a beat, as I took a step back in shock. There was a body hanging from a chandelier, held in complete stillness by a multitude of thin fishing strings. The unlucky fellow was a male Caucasian, who looked to be in his mid 40’s .The strings held his body parallel to the floor, and held his cheeks apart, giving him an eerie, clown like smile.
“What kind of sick…” I began, cut off short by the chief,


“The press is calling him ‘The Puppeteer’. Used to be all his attacks happened in LA, but I guess he’s come for a vacation here in New York…”
I saw the coroner examining the body, trying to move his limbs without much success, and examining the neck of the victim. I walked towards him, keeping my eye on the disgusting sight of the hanging man,
“Do we have a cause of death, Doc?”
“Well, there’s no way I can be certain.” he replied in a flat tone, “However, judging by the rope markings on his neck, my guess would be strangulation, but that’s not all.”
“Oh?” I lit a cigar, “Something else you can tell me about the victim?”


“Well, it appears that after our victim was killed, he was injected with carbon monoxide which stiffens the joints post mortem. This would allow our guy to mold his victim into different poses, and dangle him from these little wires.”


Normally I would take info like this with fascination, but my focus was now on the victim. I noticed a small, white object stuffed in his mouth.


“Hand me some tweezers or pliers or something, will ya, Doc.” I said, walking towards the body. The coroner threw me a pair of tweezers; I reached into the victim’s mouth, and pulled out a torn out piece of a map of New York, with Greenville Yard circled in red ink. I turned the map over in my hand, and found a message on the back which read:


The cigar I was smoking fell out of my mouth; I quickly stuffed the map into my pocket and ran out the room.
“Something wrong, Gimpy?” I heard the coroner ask.


I didn’t respond, I knew I had to get to that harbor as quickly as possible. I ran to my car, pulled out my keys and quickly started it, sweeping out of the parking lot. I drove down JFK Blvd, my tires screeching at every turn, my speed going all the way up to fifty MPH. It was dangerous, but if it meant I could catch this guy, it was worth it. I turned left onto Linden Ave, and drove straight, right into Greenville Yard. I stepped out of my car, and pulled out my 38. snub, my eyes scanning the dimly lit area. I heard a noise, like a loud splash coming from the harbor. I turned on my flashlight, and hurried to the edge of the dock, hoping to find the origin of the sound. As I peered my head over the railing of the dock, I heard footsteps from behind me. I spun around, pointing my flashlight wildly around, until it rested on a silhouette in the distance. All black, a bowler hat on his head, a crazed smile, and a voice that was shaky, yet ecstatic.


“I’ve always wanted to make a puppet out of a detective,” he shouted at me with a sense of glee, “and with that bullet in your foot* you’ll make the easiest catch yet!” (*See Lead to Toe Vol. I of the Gimpy Chronicles.) As he said this, he charged at me, fishing line in hand with every intent of making me one of his sick marionettes. I pointed my gun at the running figure, and emptied it in his direction. Surprisingly, his sprint slowed to a stagger. As he reached for my neck with his wire, I stumbled out of his way. He sailed past me, grabbing wildly, and fell into the harbor, His killing spree was over.


As I walked into the station the next day, I noticed people were being unnaturally nice to me; going out of their way to get me coffee and the paper, as well as shouting compliments as I walked to my office such as “Way to go Detective!” or “Nice catch Gimpy!” At first I was confused as to why this was, then I opened my paper and read the headline. “CRIPPLED DETECTIVE CATCHES PUPPETEER.” I nearly dropped my coffee at the picture beneath those words. Apparently the Puppeteer had become trapped in a nearby fishing net. Early that morning a fisherman had raised the nets and called the press when he say the ghastly body of a black-clad man, hanging like a grotesque statue beneath the trolling arm of his fishing boat. How appropriate, I thought. The puppet master had made his last appearance. 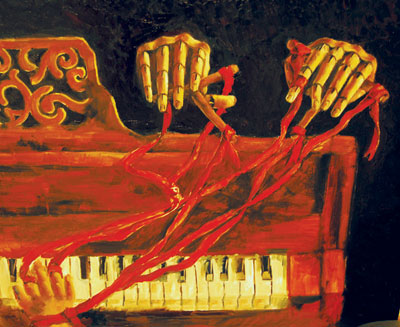 I wrote this story as a narrative piece required for my English 1301 class. I've been homeschooled most of my life and unfourtunetly never really had the chance to learn much about writing. Criticism is welcome as i really wish to improve.

PureDrawings BRONZE said...
on Nov. 13 2014 at 9:59 am
PureDrawings BRONZE, Chandler, Arizona
3 articles 43 photos 230 comments
View profile
I love the 40s-50s.. and with that said, yes , they went AS careful with evidence as they are today. But they did have autopsy reports still, and doctors wernt on sight forensic officers were.... On a side note i have read this and re-read this many times.. I love this type of stuff! XD
Nelly_Nell GOLD said...
on Nov. 13 2014 at 1:35 am
Nelly_Nell GOLD, Bakersfield, California
11 articles 0 photos 60 comments

View profile
This was absolutly amazing I love how you keep the audience on edge and egar to figure out what is going to heppen next. I think the set-up was perfect and I was able to picture the scean so clearly because of how you decribed it. I would love to read some more stories by you because you truly are an amazing writer keep up the good work. :)
RadioFree BRONZE said...
on Nov. 12 2014 at 6:45 pm
RadioFree BRONZE, Quinlan, Texas
4 articles 0 photos 5 comments

Favorite Quote:
“Two things are infinite: the universe and human stupidity; and I'm not sure about the universe.” -Albert Einstein

View profile
Thank you very much for the feedback and criticisms! In regard to the tappering/altering of evidence, i was trying to write this kinda like a Noire set in the 1940s-50s. I believe that durring that time they weren't as careful with evidence as they had no way to check for fingerprints,dna, etc. I should have made the time it took place more clear, thank you for pointing this out!
PureDrawings BRONZE said...
on Nov. 12 2014 at 3:59 pm
PureDrawings BRONZE, Chandler, Arizona
3 articles 43 photos 230 comments
View profile
Another thing... Rock on for homeschool! I also was/am homeschooled.. Your an amazing writer and i cant wait to read more!
PureDrawings BRONZE said...
on Nov. 12 2014 at 3:53 pm
PureDrawings BRONZE, Chandler, Arizona
3 articles 43 photos 230 comments
View profile
You did a great job. You had me on the edge of my seat... although there were some areas where the authenticity of how a Homicide really works is missing... the body would be examined on scene but not the that extend.. that would be determined in the autopsy report.... Another thing is the note... although he found it, a detective would never pull it out and put it in his pocket.. it would be taken to forensics for further testing and scanning for fingerprints or possible blood from the killer, and so on..... And the cigar is cool but it wouldn't be seen at a crime scene, why? because it could altar the evidence left behind...  Other than those slight changes You did a GREAT job. I love Ur sense of thrill and adventure.. I want to read more!! 5/5