The way fashion is portrayed in the media, it's an exotic other world, populated by pale, stick-like creatures without the ability to smile. They wear strange creations, the more outrageous and enigmatic the better. This other world is made to seem infinitely better than the one we inhabit, a place where the grass is definitely greener. They want you to see a paradise you can cross over and experience, if only you become one of them.
Of course, what these strange aliens don't want you to know is that starvation is a religious act, that eventually your body will give out, unable to take the stress it's put under another second more. They don't tell you about the struggles for supremacy, the peer pressure to indulge in drugs and alchohol. They don't care about the young people who starve and puke themselves to death in order to look like the alien species that painfully coexists with our own. Even those we lift onto pedestals, our celebrities, whom they use to advertise their products, they airbrush because they are dissatisfied with our standards of beauty.
The ceremonial clothing they parade up and down on their precious catwalks in doesn't fit our species and isn't designed to. For some reason, we still strive to "fit in" to a whole other world's culture. Even those If we succeed, we look ill and unhealthy, as, indeed, we are, mentally and physically. We cannot fit into the aliens' strange outfits. We are humans; we fit into human clothing. We are desperate to go along with whatever the leaders of the pack deem appropriate and acceptable. Right now, our odd alien overlords are the leaders of the pack. We cannot bring ourselves to reject the superglam, Supermodel culture, even though the consequences may be dire if we don't. 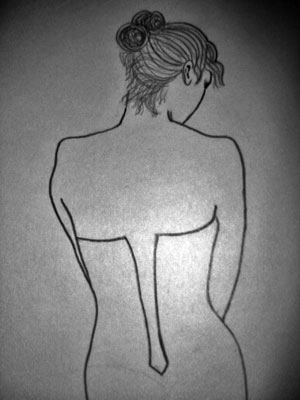 The author's comments:
A few years ago, I wrote an article on the same topic that people were sort of interested in. This is part two, and it includes some very pressing issues that face our society today.
Post a comment
Submit your own

delizabethl PLATINUM said...
on Feb. 15 2012 at 3:31 pm
delizabethl PLATINUM, Linesville, Pennsylvania
33 articles 0 photos 33 comments
View profile
This is sort of part II of my previous fashion article, "It's Not Wearable Art if You Can't WEAR IT!" Enjoy.