Life is Funny, Isn't It?

Favorite Quote:
"Aim for the moon. If you miss, you might just hit a star."

She was the weird girl.

Her name was Abigail. She had chin-length straight brown hair, brown eyes, and was very short for a 14-year-old. She was one of the smaller 8th graders. All of the middle school kids knew Abigail. She was famous for seeming younger than her actual age.

He was the weird boy.

His name was Will. He would walk backwards between classes, watch inappropriate videos during Social Studies, and search memes. All. Day. Long. He made up excuses to keep his computer out on his desk all the time. He was a 7th grader, only 13, and much larger than all of the 7th graders. He was often mistaken for an 8th grader, or even a high-school-aged kid who was kept back a couple of years.

There was a party one night, thrown by a rich kid who invited every middle schooler in the school. They were playing games, and Will and Abigail came to be together. And they became friends.

Soon, they were together whenever they could. Being in different grades, it didn’t happen very often. They sat together at lunch, and walked hand-in-hand at recess. Kids mocked them mercilessly, the two dorks together.  And then there was kissing. Soon the bullying progressed from verbal to physical fights, and the couple came to school with bruises and black eyes.

Abigail and Will were highly successful, and left their children and grandchildren millions of dollars in their wills. I’m sure that whoever bullied them are feeling like idiots; I know I am.

Life is funny, isn’t it? 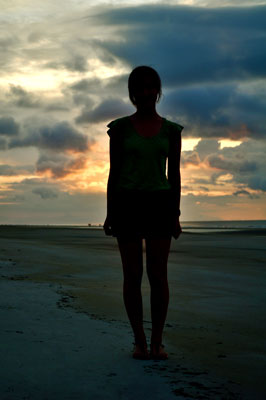