As an immigrant I have had the opportunity to view the world through many lenses. When I lived in Venezuela I was aware that many people suffered and had to struggle to sustain their families. Arriving in the United States, I knew that I would not be able to eradicate these images from my mind.

I lived for 13 years in an underdeveloped country where injustices and societal flaws were covered up by the fraudulent action of the powerful few. These most likely were the ones who hired the team of criminals who kidnapped my brothers and me, leaving us with painful memories. After this harrowing experience how could I not do something to change the world in which I live?

In the summer of 2006, reviewing the life experiences that haunted me and the impoverished living conditions of many in my homeland, I wanted to change some of those problems. Thinking big to start small, I came across the idea of world poverty. I saw it with my own eyes in Venezuela, but I read about it and studied it thoroughly since coming to America. As a student in an AP Human Geography course, I was exposed to the economics of West Africa, from cocoa production in Ivory Coast to populations below the poverty line. Later I took International Relations at Florida International University, which widened my knowledge of contemporary Africa and made me fall in love with the cause.

Through this research I found that being barefoot is not uncommon, nor is it healthy. I realized that shoes would help in the fight against poverty. This was my chance to get back at some of the injustices of the world and bring about a positive change. I founded a nonprofit organization and started collecting shoes at school and storing them in every corner I could fit a box. What better place to start than my own closet?

Shoes4Africa, Inc. (www.help4africa.com) collects shoes in cities across the U.S. and eight countries around the world to be shipped to people in Ivory Coast, Nigeria, and other African nations where so many walk barefoot and some have never owned a pair of shoes. Wearing shoes helps in the fight against environmentally caused diseases, cuts, scratches, and parasites (such as hookworm larvae), as well as progressing in terms of world development.

The first steps are often the most difficult part of founding an organization or starting a campaign, but to me those were the easiest. First I launched the website, which I designed myself. The project began small, but as people heard what we were doing, it grew.

Holding leadership positions in my school’s French Club, Future Business Leaders of America, and student government, I was able to encourage student participation in the drive. In less than one month the whole school became involved, and hundreds of shoes piled into boxes and bags. These results gave me an idea that was the turning point of my campaign.

I started networking with local organizations, companies, and schools. Soon, eight schools in my area were participating. I partnered with the local Jewish Community Center, where I volunteered as a teen ­program counselor, and Step by Step Foundation, which provided storage space for the shoes. The local Jaycees, a networking organization for young businesspeople, introduced me as their only teen member and helped in the process.

This community and Internet exposure gave me the motivation to set up a global structure for my organization. At Harvard Summer School I met professors who put me in touch with an African nonprofit I’ve been working with to send the shoes to Africa. I have made friends all over the world who are just as motivated and inspired as I am, and who have taken the campaign to their cities and countries. Now I serve as the global director, and we have eight country directors, 22 city directors, and 34 school liaisons. Giving a teen the opportunity to feel like a leader is all the motivation necessary to change the world.

With Florida International University, Shoes4Africa undertook the “Walk in My Shoes” campaign to increase awareness of sexual violence and bring an end to it, while using the campaign as a means of collecting shoes for the needy. Each pair had a story of rape attached to it, and surprisingly, many anonymous volunteers brought shoes with their own stories attached.

To raise money to pack the shoes that would be shipped free by UPS (another partner), Shoes4Africa launched “Shoot for a Cause.” Fifteen teams, 45 players, pizza, snacks, and drinks made up a wonderful Friday afternoon fundraising event. Each player paid a $28 fee to compete in one of the wildest basketball tournaments of the year.

Not only has Shoes4Africa ameliorated the conditions of the needy by providing shoes, but it prevents the spread of diseases that come with being barefoot. Moreover, the project created young leaders in over 20 cities and eight countries who are now in charge of an important campaign in their schools and communities. It made the world more aware of the harsh conditions of others, inspired teens like myself to start their own campaigns, and most importantly, changed my life! 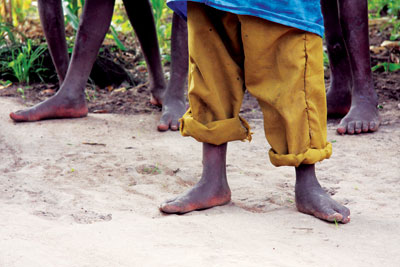 sleepinginthegarden BRONZE said...
on Dec. 2 2010 at 6:29 pm
sleepinginthegarden BRONZE, Kingston, Massachusetts
2 articles 0 photos 66 comments
View profile
plzzzzzzzzzzz post comments on my stufffff
EMW111 said...
on Oct. 28 2010 at 12:39 pm
EMW111, Plaquemine, Louisiana
0 articles 0 photos 4 comments
View profile
As the person I am, I can see where your heart is. I can relate to your saying about people who treated you or your family wrong, and it's like you want to react, but you can't because you are overruled by so much power. I like the fact that you are reaching out to the kids in Africa because they are treated badly in their environment. Starting an organization to send shoes to them is great. I would love to take part in this organization if I had a chance!
K9_Typical_Islander SILVER said...
on Jul. 1 2010 at 9:29 am
K9_Typical_Islander SILVER, Koror, Other
7 articles 0 photos 47 comments

View profile
Wow, just wow. Man...reading this piece was almost like reading a documentary and a brochure at the same time. A simple say-so dream goal turned into a worldwide awareness and effort. Who knew shoes could make that much a difference, let alone a teen. This should be on CNN: Hero 2010.  :D You make going to college and finding a career seem like nothing,a stepping stone. Wow. You do more walk than my whole Catholic school.
kiwi said...
on Jun. 9 2010 at 9:11 am
what u are doing is wonderful!!
fun size said...
on Apr. 26 2010 at 9:07 am
In my opinion they do need shoes! Could you imagine living with no shoes and always walking on hard, sharp things! Thats not even cool! But nice joc! Way to go=)
HeatherBee BRONZE said...
on Apr. 4 2010 at 8:06 am
HeatherBee BRONZE, I Live In, Texas
1 article 0 photos 1979 comments

Favorite Quote:
"It's funny. Don't ever tell anybody anything. If you do, you start missing everybody." The Catcher in the Rye

View profile
Good job, man. My school is hosting an Operation: Haiti and we're donating money to the Red Cross.
LC said...
on Jan. 20 2009 at 3:22 am
Wow what you've done is really amazing and I was wonderingthe details of how you organized the tournament to raise enough money to send the shoes. I'm involved in a group called MUNHOPE at memorial university of Newfoundland and we are going to Tanzania in July to do community work for a month. I also though shoes for africa would be a great cause to take on but we are currently fundraising for the trip so if we were to take this project on we'd have to come up with some good fundraisers....any ideas?

LC
CHUMI 1826 said...
on Dec. 30 2008 at 11:26 pm
By just reading this article my perspective towards helping world poverty has changed. I am amazed of how one child(David A) with some self-experiences can start such an organization and help not only change the world in such a way but its future leaders by publicizing and influencing their way to view the world. I am thankful because reading this article has helped me look at the world through a different lens. One, in which now I am inspired to follow in the same path and as well, find a way to help.