Today I was at the mall waiting for friends, when a lady wearing a knit hat and a sweater came up to me and, shivering, said, “I’m homeless. Would you mind buying me some food?”

In that split second, everything I’d learned since kindergarten flashed through my mind. Don’t talk to strangers … Be a good citizen … People will take ­advantage of you … Treat others as you wish to be treated … The greatest thing you’ll ever learn is just to love and be loved in return … I guess love won the debate. “Sure,” I said. “What would you like?”

She thought and then said, “I’d like to get Chinese food.” We headed upstairs. On the way she told me about when she was a teenager. She remembers taking pictures for the yearbook with her best friend. She was in the band and played basketball. She got good grades and was a good student.

She ordered soup, an egg roll, white rice, and pepper chicken. I would normally think that was a lot, but she had probably barely eaten in the last few days. I got my usual – lo mein and General Tso’s chicken.

As we ate, we got to know each other. She asked if I played any instruments. I replied that I played the violin, cello, and guitar. She told me she played the flute, piano, guitar, and violin. In the middle of our meal, I realized something. And she thought of it at exactly the same time.

“I’m Claire,” I said, startled at our exact same thought. “What’s yours?”

“Joyce,” she said with a smile.

We continued talking, and she asked my favorite subjects in school and if I wanted to go to college. “Hopefully,” I replied. “I’m interested in nursing.”

“I went to college for nursing,” she said.

I was taken aback. How could we have so much in common? Was she pretending so I’d feel sympathy for her? But her eyes were genuine as she said this.

Meanwhile I was eating my lo mein, picking around the cabbage and the other vegetables. Joyce said, “If you don’t like it you can take it back.” I told her that I liked it, but was not fond of the vegetables. She broke into a big grin. “You don’t like vegetables, huh? Neither did I. But now I do.” I immediately felt guilty. How could I be picking at my food across from someone who barely gets to eat at all?

I tried my best to finish, but she seemed to sense my guilt and said, “You don’t have to eat it if you don’t want it.” How could she know what I was feeling? I told her the dish was my favorite, but I just eat slowly.

She replied, “I used to like lo mein, but pepper chicken was my dad’s favorite, so I get that now.” Noticing that she used the word “was,” I assumed her dad had passed away. I found it sweet that she gave up her favorite in order to honor her dad.

She asked why I was at the mall.

“I’m waiting for friends. We’re going to see ‘The Curious Case of Benjamin Button,’” I replied, stumbling over the words a bit.

“‘The Curious Case of Benjamin Button,’” she echoed in awe. “What’s that about?” I realized that she didn’t see commercials for movies.

I explained the basic plot and she chuckled. “A man who is born 80 years old and ages backwards! That sounds interesting.”

She got up to get a to-go box. “Would you like one?” she asked, but I refused. I realized that this food would probably last her for a few days, and I was glad she had ordered a lot.

“Would you like these?” I asked, gesturing at the food I had left untouched. “Oh, no, thank you,” she said. “This is enough.” I got up to throw my tray away, feeling guilty about wasting so much.

“I need to meet my friends now,” I explained. “It was so nice to meet you, Joyce.”

“You too, Claire,” she replied with a smile. “Thank you.”

I headed to the theater, and she went back downstairs. It sounds like a perfect coincidence, but I can’t help but think that some force compelled us to meet. I kept puzzling, Why is Joyce homeless? It seems so unfair. She shouldn’t need people to buy her dinner. She was a nurse. She got good grades. She took pictures for her yearbook. She was the person I hope to be in the future. What went wrong? How could such a good life be rewarded with horrible luck?

I feel lucky to have run into Joyce. She changed my outlook. She is still a wonderful person, despite what the world has done to her. I wish her the best, and can only hope that the force that brought us together will help her find what she deserves in life. 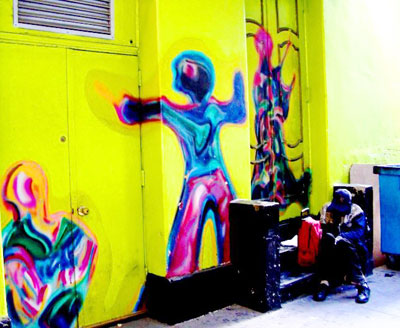 This article has 45 comments.