The Arctic is the northern region of Earth, known for being one of the coldest places on our planet. This continent plays a significant role in the preservation and formation of climatic conditions in the atmosphere. It has an amazing ecosystem that cannot be found anywhere in the world. However, in the twentieth century, the Arctic faced a new problem: the melting of glaciers.

The main reason for this phenomenon is human existence and industrial breakthrough in the 20th century. Due to the existence of various factories, transport, as well as the burning of fuels and pollutions, there was an intense increase in carbon dioxide levels, which contributed to an increase in global warming. There are also minor reasons in the face of rising sea temperatures, but this cannot be denied that the most important factor in the melting of glaciers was human.

The consequences of this phenomenon can be dire for our planet. The melting of glaciers can lead to a rise in the world ocean level and inundation of many land regions, the disappearance of many species of animals and plants, the release of greenhouse gases that will accelerate the process of global warming even more. Needless to say, the rest of the consequences of global warming as the release of ancient diseases and deterioration in the agricultural and tourism sectors.

This problem is directly related to UNECSO sustainability goals, specifically to 13th Climate change.  This confirms the urgency of this issue. This problem should receive public attention, because our planet is in great danger, and if humanity does not find a solution soon, we risk ending our existence.

The melting of glaciers is a huge disaster of the 21st century. It brings a large amount of destruction. Under the influence of this phenomenon, many negative processes occur, and one of them is a decrease in biological potential. A huge number of species is under threat right now. Polar bears become one of the endangered species due to melting glaciers.  According to the Wildlive.org official cite, population of polar bears will decline by 30% by 2050. The rapid decline in the number of this animal is due to the disappearance of hunting grounds. Ice- is a habitat of this animal, which helps to attack it is prey and receive food. However, with the melting of glaciers, animals that are not adapted to these conditions are forced to die.

So why is their loss being an issue? The reason of it is, that every species is an integral part of the ecosystem. Extinction of absolutely any population can lead to a wider mass extinction of other species. The decline in populations due to human influence violates one of UNESCO's goals of «life on land». Nationally, decrease in biodiversity can lead to a decrease in the production of medicine, food and other essential items. For the country it even might lead to economic crisis. Locally, there is a possibility of ruin of many small enterprises based on the production of products from animals. If consider global perspective, a decrease in biological populations can lead to the destruction of unique ecosystems and a decrease in the level of ecology.

Despite the disasters caused by the melting of glaciers, this process has also benefited other countries.  One of the countries, that received new opportunities was Russia. The largest country on this planet has already received 5 new ice-free lands, which could serve to spread the culture of this country. For now, the melting of glaciers open up new opportunities for shipping. Melting ice will significantly free up space for ships to sail. According to information from finance.rambler.ru, Pavel Sigal, first vice-president of the all-Russian public organization "Support of Russia", believes that on the Northern Sea Route, according to the most conservative estimates, Russia will be able to earn about 7.5 billion rubles a year. In regards of shipping, Russia will be able to offer shorter and more profitable routes for export. Through opening of new trade routes, Russia can not only take a leading place in the export of goods, but also improve political relationships with other countries. In this way, Russia will achieve tremendous success and economic growth.

Despite the benefits for some countries, this problem must be solved as a matter of priority, as catastrophic losses will affect each country at the global level. The melting of glaciers is a problem that needs to be paid great attention to as it will soon affect everyone. Because of this, tsunamis may occur in cities one day, companies will go bankrupt due to the extinction of animals, and people may begin to be exposed to unknown diseases. Several measures have already been taken to address this issue. For example, in 2016 the UN hosted a conference “Paris agreement” on fighting climate and accelerating action to reduce carbon dioxide. To stop the melting of glaciers, it is necessary to reduce the amount of gas emissions and pollution. The best solution for this issue can be switching to renewable energy sources. Countries need to stop producing oil, gas, coal and switch to solar, water and wind energy. However, to achieve this goal, a large amount of time may be needed, because closing factories, creating and reinstalling "environmentally friendly technologies" is a very long process.

In order to gradually solve the problem, it is recommended to reduce the number of transport trips. The government should actively promote ethics of healthy lifestyle, cycling and start creating electric vehicles, that won’t produce greenhouse gases. There is also another alternative solution of the problem - the active development of waste recycling. This policy will significantly help solve the problem. In 2014, Switzerland was able to become the most environmentally friendly country in the world, thanks to the transition to this development model. The reason for this alternative perspective is, that the melting of glaciers was due to the effects of global warming. Therefore, if we will reduce the amount of greenhouse gases that raise the Earth's temperature, this problem can be gradually solved.

To sum up, glacier melting is one of the most relevant problems of the 21st century. The main reason for the sharp change in ice concentration in one of the coldest regions in the world was the massive burning of fuel and pollution by human hands. Every year the temperature in the Arctic rises and because of this, there is an intense destruction of the whole ecosystem. Global warming caused by the influence of humanity has led not only to the melting of glaciers, but also to a chain of global catastrophes.

Some global consequences are dangerous sea level rise, the release of greenhouse gases under the Arctic ice layer and the mass extinction of animals. Ecologically, the decline in various animal species could lead to mass extinctions of other populations. For regions and even countries, the extinction of several animal species can lead to an economic crisis. For other countries, melting glaciers can bring significant benefits. For Russia, which is in a convenient geographical position, this global problem opens up opportunities for the development of shipping and exports.

Despite this, the positive aspects of the situation are minimal. Humanity needs to solve the problem with alternative perspectives. To tackle the problem of melting glaciers, we must significantly reduce our carbon dioxide emissions so that we can reduce the effects of global warming - the main cause of glacier melting. The government needs to make the transition to renewable energy sources. There are also solutions, such as intensive recycling of waste in order to reduce pollution and reduce the use of transport by people.

This research underlined the importance of glacier in Arctica. It is been demonstrated that, people are directly related to the ongoing global disasters. This paper described the consequences of melting glaciers and stressed the fact, that humanity should solve this issue as soon as possible. 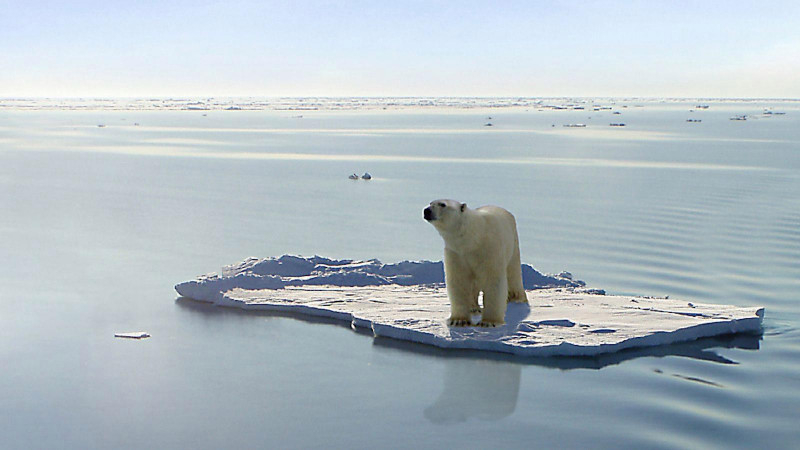