Can you imagine if only one in a thousand human babies survived? The population would be very small and we would probably be an endangered species. Luckily, this isn’t the case for us, but for endangered sea turtles it is a reality. Some of the older turtles, which are 140 to 160 year old, can lay hundreds of eggs every time they go ashore. However, only one or two of these eggs survive. Some turtles have been known to live more than 250 years, but because of poachers few actually survive that long. The cycle of life for the turtle is hard, and the beginning is a very rare thing to witness. I had the amazing opportunity to see these humongous creatures lay their eggs one hot night in Costa Rica.
A few summers ago, I was living in San Jose, Costa Rica, and one weekend my dad and I went to Turtoquero. The first day in this island town, we went on a rainforest tour. On this walk, we saw amazing animals like the loud howler monkey, the mystical white-faced monkey, a deadly poisonous snake, and several terrifying spiders. We had heard that at this time of the year, the sea turtles would come on shore and lay their eggs. This is a very rare opportunity, so my dad quickly got two tickets for a midnight beach tour.
Dressed in dark colors and good walking shoes, we started out around 8 p.m. Baby turtles navigate toward the beach by following the light of the moon. However, they can easily get confused, so only our group leader had a small, red flashlight to lead us.
In broken English our guide explained, “If a turtle was to see a lot of movement or flashing lights, it might get scared and lay its eggs in the ocean instead of on the beach. This would give the eggs absolutely no chance of survival.”
Walking through the jungle in the dark I felt like a sumo wrestler trying to climb through a McDonald’s Play Place. It was hard to see the roots on the forest floor as well as the turns, and it was easy to trip. It also didn’t help that our guide told us, in a warning voice, “You should not stray from the path because dangerous animals come out at night. We have some very poisonous ones, especially the snake.”
In a hushed voice my dad explained, “The snakes here are some of the most poisonous for their size in all the world. They are so poisonous that if you are bitten and don’t get treated within four hours, you will die! More people die of this snake’s bite each year than in car crashes in Costa Rica.”
“Thanks, Dad, that really helps me conquer my horrible fear of snakes! And gives me tons of confidence about walking through a pitch-black jungle with only one flashlight and a guide who can barely speak English!” I said sarcastically.
After trudging through the thick forest, we stumbled out into the salty air on the beach. Immediately, our guide turned off his flashlight and motioned to be quiet. There, not 10 feet away, lay a bigger-than-life turtle, making a nest in the soft sand. This turtle was slightly smaller than my kitchen table back home. Whispering, our guide said, “If you would like, you can approach from the back and touch her shell. She won’t feel it.”
We cautiously approached, lay down on our stomachs, and put our hands on her hard, sandy shell. As she worked and sprayed us with sand, you could feel under her coarse shell that she was as strong as a horse. This massive turtle had already laid the majority of her eggs. With us still lying in the sand behind her, she started to cover her nest using her strong back legs, spraying us with even more sand.
Our guide then took us further down the beach to see more beautiful turtles making their nests. A few times, we almost ran right into other stout turtles that were slowly making their way onto shore. As your eyes adjusted to the extremely dim light, the beach appeared covered with wounded soldiers limping slowly from the sea. Watching the turtles haul their massive bodies onto the beach for their survival tradition gave me goose bumps that warm summer night.
Taking this trip to see the awesome turtles really inspired me to take steps to help them. Standing on the edge of the crashing waves, feeling a tingling sensation knowing that the turtles were trying to beat the odds, gave me stunning splashes of inspiration. I hope that sometime soon I will be able to return to that beach to help keep the mysterious turtles safe so that others around the world will be able to enjoy these magnificent creatures. 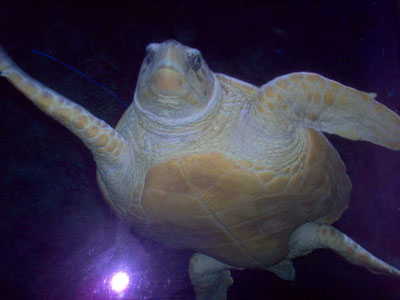