We want them big. We want them fast. We want 345 horsepower in a V8 engine and 15 miles per gallon on the highway. We want SUVs that look more beefy than sporty and trucks with wheels bigger than the average kindergartner. Do we ever drive offroad? Of course not! But we look good in SUVs.

Who asks for a Prius? Who cares about hybrids? Ethanol and electric cars are for sissies and hippies. Real men drive on petroleum.

Still, I curse every time I go to a gas station. The oil companies must be manipulating the price. I’ll call my congresswoman to complain. I also hate those commodity traders in Chicago who bid up the price of crude oil. Greed is the mother of all sins. Don’t forget OPEC, the cartel that controls the world’s energy. It is the one to blame for the sky-high gas prices.

To feed our monster vehicles, we’ll drill for oil wherever we want. We don’t care about caribou. We don’t care about reindeer. Santa will just have to relocate. If tourists don’t like oil rigs off Palm Beach, they can go flyfishing in Montana. If we have to conquer the Iraqis and flatter the Saudis to get our unleaded and super unleaded gasoline, by God, we will.

To counter the effects of our oil addiction, we can make silk-print T-shirts for Earth Day and wear them with pride. Shut off our water when we’re brushing our teeth, carpool our Hummers to school, and vote the Democratic ticket.

When the globe gets warmer, we’ll just turn up the air-conditioners. We’ll grab sodas from our refrigerators and ice cream from our freezers. We’ll put up our feet and flip on the flat-screens.

When flyfishing in Montana gets uncomfortably hot, instead we’ll go camping in Manitoba where the breeze is cooler. We’ll watch as Greenland turns green and Iceland turns icy.

In the meantime, we’ll drive our mammoth, air-conditioned cars to our mammoth beaches and ditch the spray tan for skin cancer. After all, beauty is pain.

If global warming creates Katrina sequels, that’s more business for FEMA. Even though they didn’t get it right the first time.

Kyoto protocol? I know, we were criticized to death for that. But at least Aussies are on our side. If Australia did not sign it, why should we? Besides, why should the Chinese and the Indians be exempted from the treaty? I will keep on driving my SUV until every Chinese or Indian gives up his scooter. 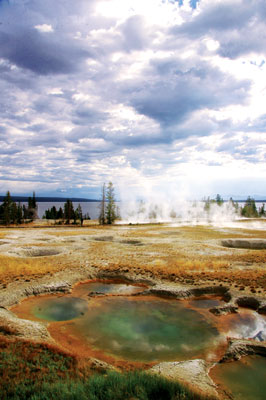