The grass blades are gently swaying in the night breeze. I’m walking barefoot in my backyard. Mommy says you can get worms doing this, but the dew on the grass feels nice between my small toes. I look up to see that the street lights have come on, my signal to go home. I need to find Dre, my little brother. There he is, standing in my neighbor’s backyard next to Jay, who is a year older than me and always finding mischief for us to get into (like yesterday when we went screaming down the sidewalk in our new homemade go-cart).

Right now he and Dre are standing very close to the post that holds up Jay’s rickety shed. This shed is not meant for us to play in. It looks like a mini Home Depot inside because it’s where Jay’s dad keeps all his tools.

From where I am standing, it seems as though something is wrong and I start to run over. Before I do, I slip on my pink Jellies that I have been holding. Jay’s backyard is completely dirt, like the roads in the old cowboy movies, and dirt on wet feet is not as much fun as dew.

“What is it?” I ask anxiously, pushing the two boys aside.

“A wha-” my question is cut short when I see the hideous thing he is talking about.

On the post next to the shed is a monster of an insect. It is green and shiny like an emerald knight with little beady black eyes that seem to look at everything, but see nothing. The thing that strikes me most about the bug is that half its body is still encased in old, brown, crusty skin. It’s shedding its skin. I thought only snakes did this. My female instincts tell me to scream. My Krystal instinct tells me to touch it. I touch it ... then quickly pull my hand away and scream. I’ve never seen anything like this and I’m mesmerized.

I watch the cicada pull itself out of its old covering. Before long the insect is completely separated from its dingy skin and has two small shriveled wings by its sides. Now how the heck is he supposed to fly with those, I wonder. But now the best part begins. The veins in the cicada’s wings fill up with blood, or bug goo, or whatever it is that makes an insect tick. It travels all the way from the body to the very tips of the wings. It reminds me of movies when a person gets injected with poison and you can see it traveling down the arm, every vein becoming eerily visible. In a few moments the cicada has two big, beautiful wings and sits with them open on the post.

Moments later the cicada takes off with the speed of a little rocket as if nothing had ever happened. I remain there, as though stunned, for a couple of minutes. The lights from the street lights bring me back to reality and I remember I’m supposed to be inside. I grab my little brother and run home. 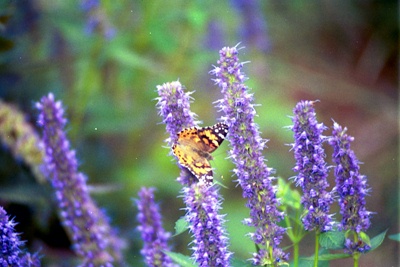